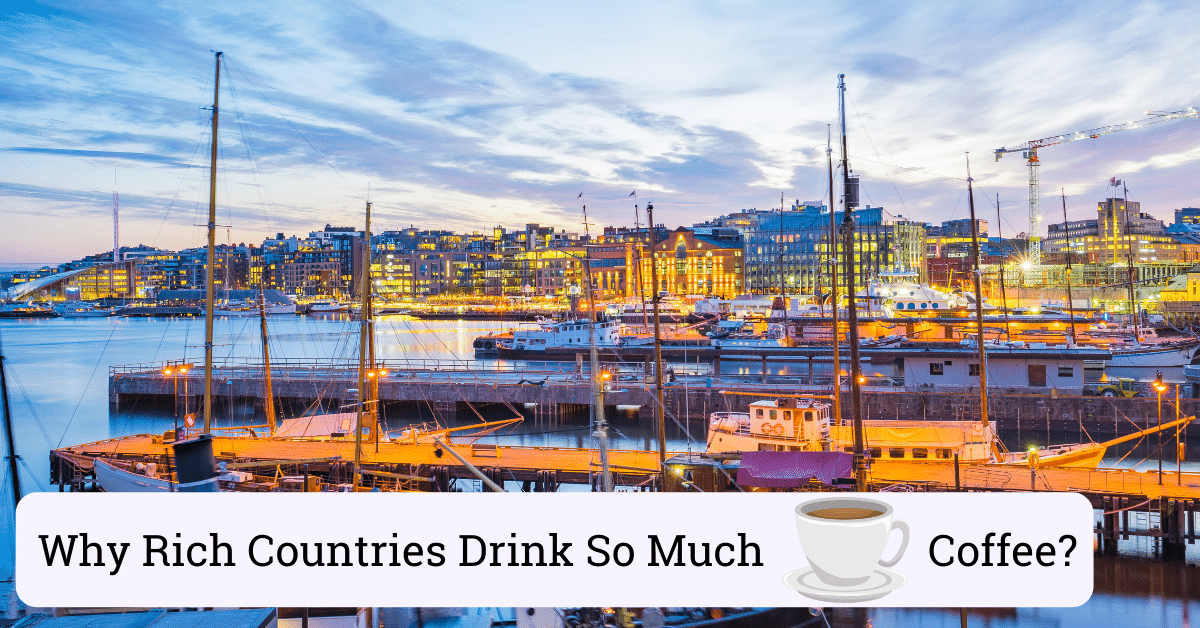 For years my morning routine has started with a cup of Joe and the news headlines. Today’s headline was about the amounts of coffee consumed in the world. This topic was very interesting and made me wonder why rich countries drink so much coffee!

Coffee is consumed more in rich countries, with European countries taking most of the top spots. Let us explore the reasons for this and determine which wealthy countries rank in the top 10.

Why Rich Countries Consume So Much Coffee

There are many reasons that coffee is consumed so much in Rich Countries.

What Are The Coffee Cultures?

The culture in the United States is all about fast pace and quantity. American servings are one of the largest in the coffee world, a whopping 9oz compared to the standard 4-5oz found in other countries. No other continent offers as much variety in specialty coffees as in the United States.

The average wait time for a cup of coffee is only 3-5 minutes. Although c Americans drink coffee at home, they prefer the abundance and assortment of coffee shops to enjoy their coffee, making coffee a booming business!

In Europe, the coffee culture is much more relaxed, and they have not adopted the coffee-to-go option, instead preferring to sit, relax and take in the atmosphere. Europeans favor the more elegant and original strong coffee styles. Most popular are the espresso, Doppio, Latte’ & classic Americano. In Europe, it is customary to enjoy a coffee after a meal.

Who Drinks The Most Coffee?

The top 10 spots are all held by countries that feature in the top 20 wealthiest countries in the world. The United States is ranked number 25 with a 4.4 kg per capita.

Why Do Scandinavians Drink So Much Coffee?

The Scandinavian countries drink the most coffee in Europe.   They have long cold stretches of winters, thus making coffee the perfect drink.

Finland, Norway, Denmark, Iceland, and Sweden have long histories with coffee and prefer a lighter, fruitier coffee roast. These countries typically import a higher quality and a more expensive bean, raising the average cost for a cup of coffee to $3.99.

Why Do Rich Countries Drink Coffee?

The top 10 coffee-consuming countries all have icy or prolonged winters; Scientists have proven that coffee does warm you up, but this is due to the caffeine content and not the heat of the beverage.

The price of coffee does not mean that it is superior and better tasting than the cheaper brew. Although price is synonymous with quality and rarity, it might just not be the taste you want!

A blind taste test conducted in 2016 between a cheap deli coffee and a more expensive brand resulted in 67% of the participants preferring the more affordable brew. Always trust your taste buds and follow your nose to obtain the perfect cup of coffee for you.

Where Is the Largest Market For Coffee?

The United States is the largest market by volume for coffee in the world. Due to the sheer number of stores and coffee shops, 24.2 million bags of coffee were imported by the United States in 2020. On average, Americans drink 3.1 cups of coffee per day, a total of 400 Million cups.

Coffee is a beverage enjoyed worldwide, with different cultures and flavors to suit anyone’s taste buds. The Americans want fast service and large cups, while the Europeans prefer to sit and enjoy a classic cup. The Asian coffee culture is a blend of European and American and is currently growing in popularity.

In Wealthier Countries, coffee is more abundant, with coffee shops around every corner where customers go for their daily cup of coffee.

Scandinavians drink the most coffee per capita due to their history, and it helps to keep them warm in the long cold winters. By volume, the United States imports the most coffee in the world.