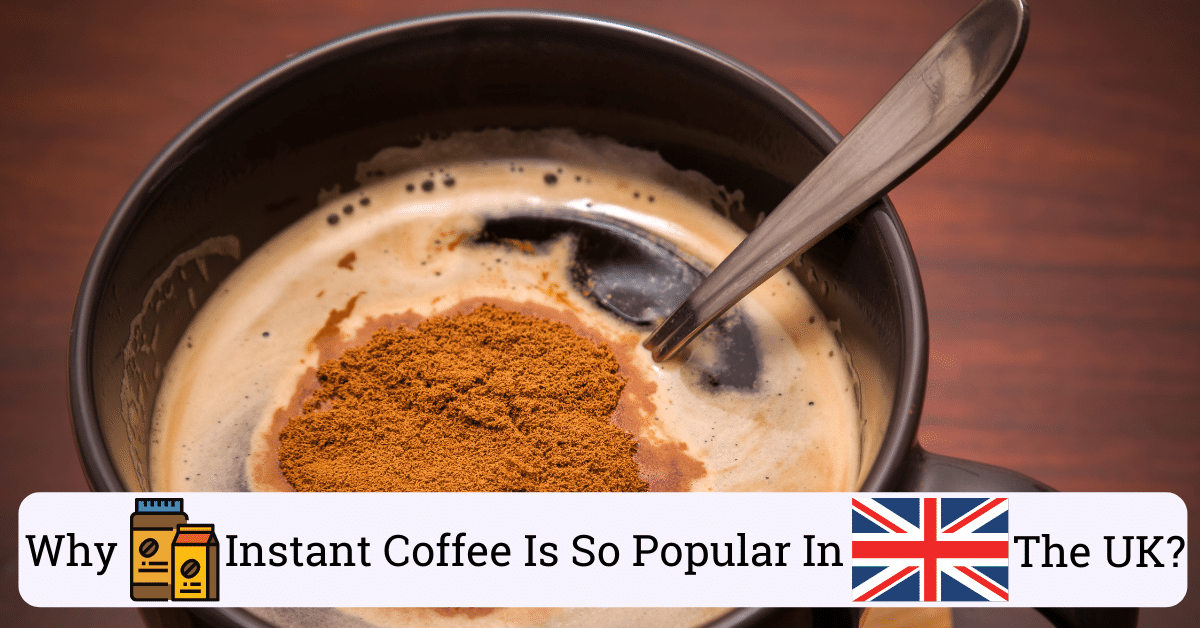 The British Coffee Association states that 80% of UK households buy instant coffee. This may seem odd to visitors since British cafés do sell espressos and filter. But go into a British home, and when they offer “a cuppa,” if you answer “coffee,” you’re getting instant. (Possibly very weak instant if your host doesn’t drink it, themselves.) Why?

Instant coffee is easy to prepare in the UK. They already have to turn their kettle on for their tea drinking guests, so instant instead of filter is faster and simpler. UK kettles work much quicker than US kettles, and buying a separate machine for coffee takes up limited kitchen space.

Indeed, the UK coffee culture is not like the United States. If you go into a restaurant or pub in the UK, you have to order each cup of coffee one by one. Somebody coming around refilling your mug is rare. Also, unless you order an espresso-type drink, coffee in restaurants and pubs is typically French press. Again, it comes down to time and space.

When Americans go abroad, they are confronted with this amazing invention: the electric kettle. It makes the water hot and fast. Suddenly, tea tastes good, thanks to this fabulous electric kettle because the water is hot and wasn’t microwaved. It’s brilliant.

But then Americans go home, get online, order a kettle, and it is rubbish. It takes ages and ages to work, and even when it is done, it’s meh. You could have got the same results sticking the water in the microwave or, even better, putting an old kettle on the stove. The former gives meh results; the latter is great but takes ages.

Thus, many wonder why British kettles are so superior to those sold in the United States. The answer is actually simple: electricity.

Electric Kettles: Electricity In the US Vs. UK

The UK has a standard voltage of 230 V. In fact, a fair chunk of the world runs on 230 V. Thus, when a person travels from, say, South Africa to the UK, they can bring their appliances, including their brilliant kettle. All they need is a plug adapter.

However, people in North America can’t bring their appliances to their trip to Europe. This is because North American runs on 120 V. Why? Some say it is for safety. Others say it was because Europe was cheap and wanted to use less copper wire. Regardless, it is the reason US kettles are completely rubbish. Not enough volts.

Thus, when you make coffee in the United States, using pods, a filter coffee machine, or splashing out on an espresso machine makes more sense. Otherwise, the water will not be hot enough to get a decent cup of coffee. The only other option is to put a kettle on the stove and wait for ages.

The lousy electric kettle is also why tea often tastes so bad in the United States. Tea in the US is almost always brewed in water that just isn’t hot enough. In fact, if you order it from a diner, it is almost always microwaved.

Meanwhile, back in the UK, they are a nation with a history of tea drinkers. When somebody comes over, be it your friends or the plumber, you offer them “a cuppa.” Anybody who comes with bad news, upset, or stressed, you put the kettle on. The kettle is Britain’s way of dealing with everything, from a scraped knee to nuclear war. It creates a pause—a relief.

But this custom is a process, especially when there are many people. Each order is taken, and the last thing a British host needs is to deal with a second appliance. The kettle is on, and that water will fix every single drink. So decaf tea for those mugs, proper tea for these, and then a spoonful of instant for the coffee people. Done.

This is easy because they have awesome kettles. Their tea is amazing. Even their cheap “builder’s tea” often tastes better than the expensive stuff in the States because, with a good kettle, you can brew it properly.

Also, if you are at a home that does do grounds, it will probably be served in a lovely French press. French press coffee can be brilliant. It doesn’t even take that long, much faster than a filter coffee, because of the amazing British kettle. Plus, the French press takes up less space than a filter machine.

Since French press coffee is quick, easy, and can taste brilliant, it is a wonder more British households don’t serve that instead of instant. Well, the reason is the washing up and space.

British homes are typically on a much smaller scale than those in North America. As a result, cupboard space is a premium. In addition, a British kitchen is almost always where the washing machine goes, which uses up even more potential cupboard space. So, the French press is one more thing to store, and where do you put it? Not the counter; it is tiny.

Meanwhile, where does the dishwasher go with your washing machine already in the kitchen? The truth is, even now, less than half of British households have one. It isn’t that the Brits love the washing up, but that washing dishes by hand is far easier than washing clothes by hand. Thus, if you have to choose just one, you pick the washing machine.

So your British host already has the mugs to clean when the guests leave. Adding a French press to the mix just creates that much more washing up. The grounds can be put into the compost, sure. But otherwise, it’s a messy job, and garbage disposables are a very American thing. Even if they do own a dishwasher, it will be small, and, again, where to fit the press?

Thus, instant coffee saves time and space. You don’t have a filter coffee machine sitting on the same part of the counter you need to fix dinner. It doesn’t add any more washing up than a cup of tea would create. Nor do you have a French press eating into cupboard space and spreading grounds all over the washing up.

Besides, when you go out to a café, you can just buy a brilliant non-instant coffee there. It makes the outing a treat. One of life’s small joys without bringing all that fuss and bother home.