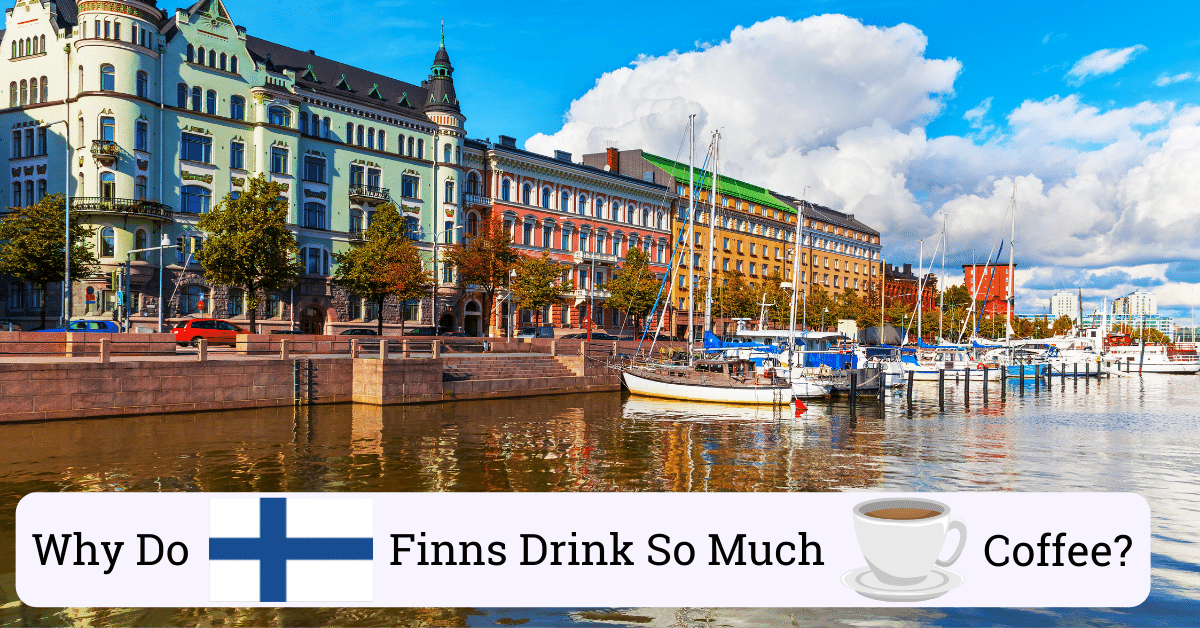 When I think about Finland, I see the northern lights over Lapland, saunas and ice baths, icy mornings with a thermos filled with coffee. Coffee is that warm me up drink. It’s inviting, friendly, enjoyable, and warms you up from the inside.

It is to no surprise then that Finns drink so much coffee. With temperatures averaging at -49°F in some parts of the country, winter lasts for almost 5 to 6 months. So a warm thermos of coffee or a cup when you walk in at home is simply the norm, and you wouldn’t want to be caught without it.

In any house in most parts of the world, it is customary to offer guests some coffee when they enter. So, the concept that Finns have the same principle in inviting guests is no strange one. What might be more shocking is the amount of coffee they consume.

Why Do Finns Drink So Much Coffee?

The Finnish coffee culture is so deeply rooted in their being that it is as synonymous with Finland as saunas, ice baths, and northern lights.

Although they do use it to keep warm, it is also sociable to drink coffee. Coffee shops make great meeting spots, and coffee is almost always served when visiting someone. And with coffee comes the cake! Now it’s starting to make sense.

Coffee and cake, ‘kakkukahvi’ is what they call it. One of the very popular cakes they serve is more of a sweet bun, topped with vanilla icing, than cake, as you might imagine. But since they drink so much coffee and eat the cake with it, I can easily believe that it pairs well.

If you don’t know this yet, you will know. Being so close to the North Pole, Finland sometimes enjoys as little as 3 to 4 hours of sunlight in winter. Those are dark days. Luckily, the Finnish do not get low in spirits because of it and are well accustomed to life in the dark.

However, a coffee break at the office or meeting over coffee can be beneficial and break the day. According to an article in Insider, some even believe they need the extra caffeine to stay awake during the dark hours of a workday.

It is also considered rude to decline a cup of coffee when offered to you. This is because the Finnish celebrate with coffee, and they even have names for the coffee of different celebrations or coffee drank at other times.

Want to know how to schedule a meeting in Finland? It’s easy, only say ‘let’s go for coffee’ and the meeting is scheduled.

It goes further than that. A working day in Finland has got two legally mandated 15-minute coffee breaks. Want to move there yet?

If you’re not completely amazed by this, then coffee you might not be such a big coffee lover, but that is OK. They have tea too, and it’s just not that popular.

How Many Cups Of Coffee Do Finns Drink A Day?

Hold on to your hats, folks. Finns drink plenty of coffee, and how much is that you might wonder. Well, they drink up to 5 to 8 cups of coffee a day. They are the country that consumes the most coffee per capita, with a whopping 26 lbs. per year.

What Types Of Coffee Do Finns Drink?

Finns don’t drink decaf. I doubt that they even know what it is. Finns drink lightly roasted filter coffee or something similar, Bialetti, pour-over, French press, dripper coffee, etc. They also classify drinks like espresso or coffee with lots of milk like lattes as fancy or special drinks.

Since Finland’s tap water is top-notch, they don’t need extremely dark roasts to brew the coffee to bring out its fantastic aroma and taste.

If you are visiting Finland, but you’re not such a big coffee person, don’t worry, you won’t stay out in the cold. Most coffee shops sell coffee and a variety of teas, hot chocolate, and some other special hot drinks to make you warm inside.

Since Finland is a land of extremes, they have summer days with sunshine for 24 hours of the day. Actually, in the heat of summer, their summer days last about two months in the Lapland, and in the southern part of the country, it also doesn’t get dark, only a few hours of twilight, before the new day breaks.

The Finns also don’t drink less coffee in the summer. Ice coffee is a go-to and helps keep one cool and the caffeine cravings at bay. After all, you can’t only drink coffee in winter.

Where Do Finns Drink Coffee

Many Finns start their day with a cup of coffee at home and proceed the day with coffee throughout. You would think that there are several popular multinational coffee chains in Finland, but there aren’t. You will only find one Starbucks in Helsinki, the capital city.

There is no need for multinational chains in Finland as they have their own national chains, corner shops, and various other local shops brewing some coffee. There are even self-help coffee stations at many coffee shops, where patrons can easily refill their own cups.

Silence is golden, and coffee is black gold. It is a Finnish custom that one can drink coffee with people and not speak during that time. However, everyone might not desire this.

However, can you imagine being busy at work, Skype calls, and business meetings, project coordination, and the list goes on and on? Then the clock strikes; it’s coffee break time. You can finally sit down, enjoy your cup of coffee with literally no one to bother you because everyone is enjoying their cups of coffee.

So, the Finnish enjoy coffee, a lot of coffee every day, and if you think about it, it does not seem like such an absurd idea. Coffee makes the Finnish happy, it is ingrained in their culture, and it happens to be that they are the happiest country in the world for the fourth consecutive year.

If you don’t think coffee brings happiness, then you have not looked at the coffee culture of Finland. Money can’t buy happiness, and according to the Finnish coffee culture, it sure can buy coffee, and coffee makes you happy.