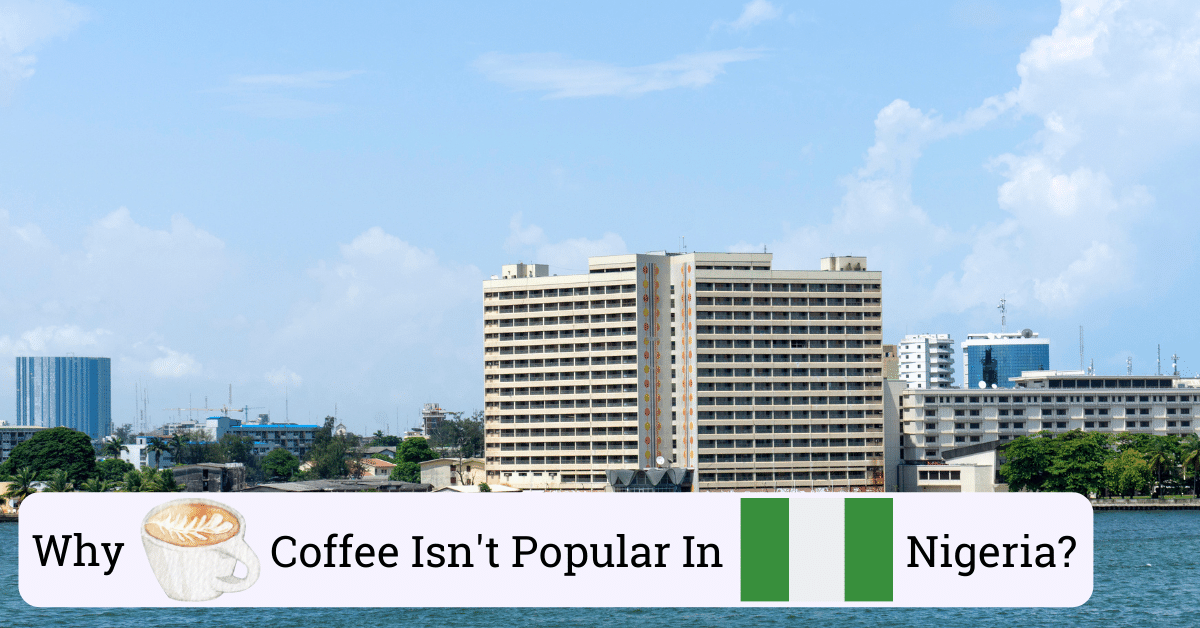 While Africa is one of the biggest producers of coffee across the globe, certain countries such as Nigeria have not quite tapped into this market. While Nigeria has a population 3 times the size that of France, for example, they consumed a mere 836 tons of coffee in a year, fading in comparison to France’s 366,000 tons.

Coffee isn’t popular in Nigeria due to numerous reasons. These include items such as cost factors, as well as an overwhelming preference for tea as a result of British colonial rule extending over a number of decades. Hot cocoa is another drink that is also preferred in Nigeria over coffee.

While coffee hasn’t been popular in Nigeria for a long time because of several factors, there seems to be a recent upwards trend in the consumption of coffee in this nation. This growing demand seems to be attributed to the young middle-class segment of the population, who tend to be well-traveled and thereby accustomed to the burgeoning worldwide coffee culture.

Why Coffee Isn’t Popular In Nigeria (Yet)

For the longest time, Nigeria has not needed to produce coffee in large amounts because their economy was based largely on oil, and the coffee they did produce did not make it into the hands of the population at large.

Because instant coffee costs only around 100 naira for a cup (a few cents), this option is far more popular amongst Nigerians than freshly brewed coffee or espresso. The instant coffee option is not only significantly cheaper but also largely more widely available.

While tea and cocoa are the hot drinks most widely chosen by those who live in Nigeria, at around 40% of the non-alcoholic drink consumption, coffee accounts for only 2.5%. This figure is slowly changing, however, as Nigerian society slowly starts to catch on to what is trending on the global coffee scene.

Nestle has created a monopoly for itself in the instant coffee market in Nigeria with its Nescafe line of instant coffee products. Because they’ve been the only significant player in the Nigerian coffee market, Nestle has had the ability to control price and availability for over three decades.

They have essentially controlled the growth of the coffee market, dictating how quickly the market is able to grow and in which direction, as well as the way in which it is structured. Nescafe has positioned itself as accessible at every income level, with a range of products to suit every budget.

While this has helped them significantly in terms of maintaining their monopoly, their modus operandi has also been to infiltrate the service market through the introduction of mobile coffee carts. This strategic move has allowed the producer to bring a steaming cup of instant coffee directly to the consumer.

By the year 2020, the consumption of coffee in Nigeria increased beyond 1000 tons, with growth projected to climb exponentially in the years to follow. With an approximately 75% share in the market, Nescafe will be responsible for the majority of these sales.

If that trend were to continue, it would be extremely unhealthy for the growth of the coffee market on the whole in this country.

Because Nestle seems to have dominated the market in terms of meeting the coffee needs of Nigeria’s population, albeit with instant coffee, it can make it somewhat difficult for other international coffee chains to break into the market, thus creating limited opportunities for top-end espresso-based drinks.

The world of coffee in Nigeria is most certainly growing, and this is creating further opportunities for other coffee producers in the area to begin claiming their stake in the industry. What this means is that there will be an increasing amount of competition in the coffee market in the country.

Healthy competition, in return, will result in boosted production of coffee beans and, therefore, a growing industry, providing increased work opportunities across the board. With increased urbanization occurring in Nigeria, there has been an increase in the demand for fresh coffee that is locally produced.

Kaldi Africa is one of a few independent Nigerian coffee companies featuring a roastery and a coffee bar. With a strong focus on quality and results, Kaldi roasts their beans in small batches, ensuring fresh coffee at all times.

To ensure that the industry is not only kept alive but able to grow, Kaldi Africa branches out into supporting the coffee farmers in Nigeria, investing in machinery which assists the farming processes of the beans. Strict testing ensures that clients are assured of a top-quality product every time.

Along with this, the coffee is always available to be tasted by potential clients before any purchases are made, thus ensuring complete customer satisfaction.

It is small companies like Kaldi Africa that hope to slowly grow the coffee industry in Nigeria, appealing to the increasing number of coffee-drinking locals who are on the search for something more than instant coffee.

The goal here is to allow Nigeria to become a significant player in the global coffee marketplace, putting Nigeria on the map as another African country producing top-quality coffee for the world to enjoy.

While coffee in Nigeria is the least popular of all the available hot drink options, due in large part to the popularity of tea under British colonial rule, the coffee market is beginning to grow significantly. Instant coffee has consistently been the dominant coffee option due to affordability and convenience.

As competition starts to grow and more options for coffee become available, paired with an increased interest in coffee with the younger middle-class generation, the popularity of coffee in Nigeria will continue to grow with each passing year, eventually allowing the country to become a global player.