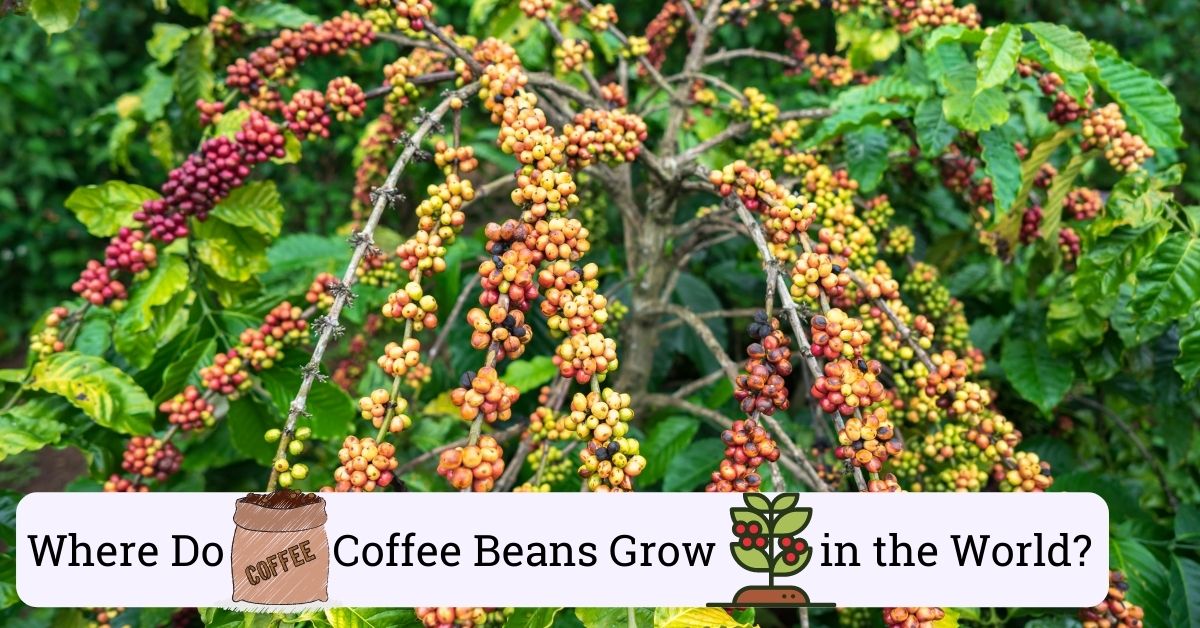 Coffee is part of the daily routine for many people, and many cannot get through their day without it. Coffee unites us and divides us, but not everyone knows where their coffee comes from. This leads many coffee lovers to wonder where do coffee beans grow in the world?

Where Do Coffee Beans Grow?

Coffee beans are the delicious seeds of the coffee cherry that are dried, ground up, and brewed to produce one of the world’s most popular beverages. The journey that coffee beans take from tree to cup is incredible and worthwhile understanding. An important part of understanding coffee better is learning where coffee beans grow.

The particular climate required by coffee trees is a temperate climate, not too hot and not too cold, with significant yearly rainfall, and preferably a high altitude as well.

These conditions are not common everywhere, but the places that hold these particular climate conditions allow coffee trees to flourish. This ideal coffee-growing climate is often found along the Equator, which means that many coffee trees grow very well near the Equator.

This imaginary line that circumnavigates the earth has come to be known in the coffee world as the coffee belt. The coffee trees that grow in the coffee belt do very well, but there are places outside of the Equator that also grow well, so this is not considered to be a rule.

With that being said, coffee grows very in sub-tropical environments, and such environments are common in South America, South East Asia, and Central Africa. Most of the coffee grown internationally is grown in these regions.

Where Are The Most Coffee Beans Grown?

Coffee is grown very well in temperate climates with plenty of rain and good altitude. We have established that these climate conditions are common in South America, SE Asia, and parts of Africa, but which regions produce the most coffee?

The countries that produce the most coffee every year are all found in the regions mentioned above. Most of the world’s coffee is produced in only a handful of countries, including Brazil, Vietnam, and Colombia.

Vietnam produces the second-largest amount of coffee per year, growing over 1600 metric tons on average per year. Colombia is next on the list and grows 885 metric tons of coffee beans every year.

These three countries account for the vast majority of the world’s coffee production. Other countries that produce large amounts of coffee beans every year include Indonesia, Ethiopia, Honduras, Peru, India, Uganda, and Guatemala.

The beans grown in each country have distinctive characteristics and flavors, each with its own unique intensity and strength. The world of coffee is diverse, and tasting coffee beans grown in various countries is one of the joys of drinking this delicious beverage.

Where Are The Best Coffee Beans Grown?

Coffee beans are grown in hundreds of countries internationally, and there are many countries renowned for the quality of the coffee produced there, but where in the world are the best coffee beans grown?

The coffee grown in Brazil is famed for its quality and clarity of flavor. The coffee made from Brazilian coffee beans is sweet with flavors of caramel and chocolate, has low acidity, full-body, high intensity, and undertones of nuts.

The best coffee for you is, of course, personal preference, and the only way to know which coffee you like best is to taste as many coffee varieties as you can.

Where Were The First Coffee Beans Grown?

We have established that coffee grows very well in certain countries and not well in others, and there are a handful of countries that produce most of the coffee beans in the world, but where does coffee originate from?

The first coffee farms established for trade and consumption were in Yemen, planted by European traders and settlers. These coffee farms were the first to grow and harvest coffee beans on a large scale, and for this reason, Yemen is considered to be the birthplace of the international coffee industry.

Coffee beans are grown in several different places throughout the world. However, coffee bean trees only flourish under very specific conditions, which limits mass coffee production to only a small number of countries worldwide, including Central Africa, South America, and Southeast Asia.

Part of the great pleasure that is drinking coffee is tasting coffee from various regions. If you are interested in coffee and enjoy the flavors possible from this beverage, take the time to source some coffee beans from various countries and ready yourself for a unique experience found in every cup!