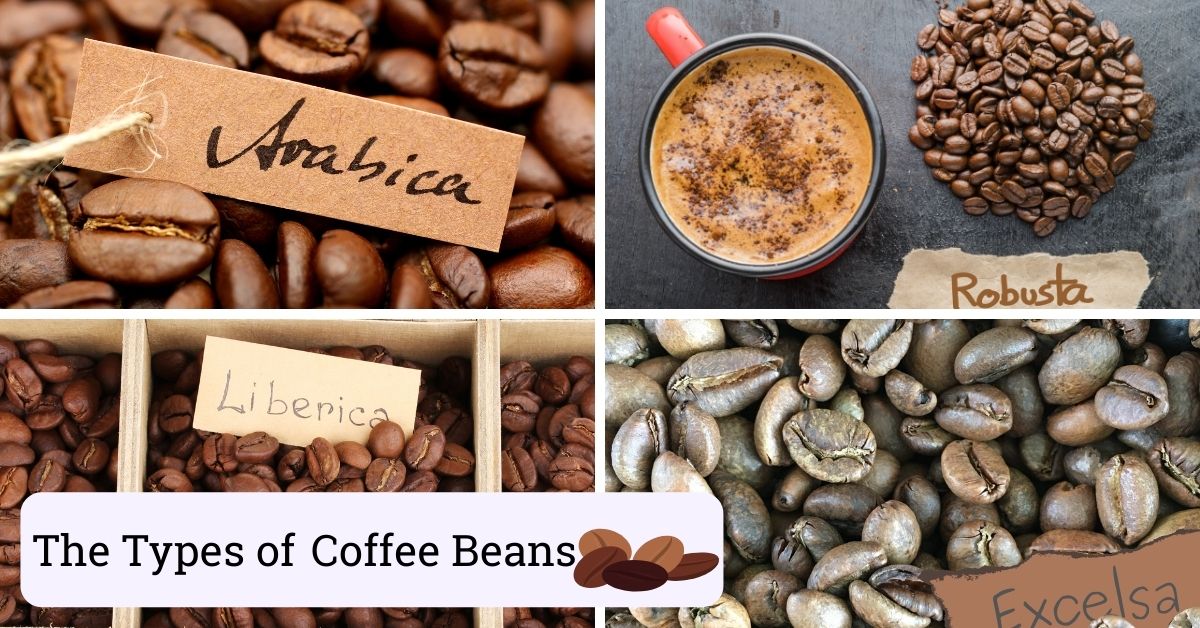 Most people waking up with their favorite brand of coffee probably don’t stop and think about what type of beans they’re using. However, there are many different species and styles available on the market today. Understanding the taste differences between these options should help to make your coffee experience much more enjoyable. We are talking about the 4 types of coffee beans.

Here’s what you need to know.

If you enjoy coffee, there’s a good chance you’ve drank Arabica coffee beans. In fact, I’d say it’s pretty darn near impossible that you haven’t had them at some point! That’s because Arabica makes up between 70-80% of all coffee produced in the world. I found a few different reports that varied between 70 to 80%, but all my sources agreed that Arabica was, by far, the most common coffee type.

Arabica beans usually have a high yield, meaning they’re easy to produce in large amounts. Typically, you find them throughout Latin America, some parts of Africa, Yemen, and even Ethiopia. It requires a low-intensity growing situation, as well, meaning it is pretty simple to grow without worrying about problems with soil acidity, etc.

Arabica’s popularity also centers around its smooth and not overbearing taste. While they do have a higher overall acidity compared to other types of beans, they have a wine-style taste that many fans of coffee love. Even if you weren’t seeking out Arabica beans before, you’ve likely enjoyed their fruity, sugary, and berry undertones and the slight kick in their aftertaste.

Expect a reasonably fruity aroma with each cup, as well, with a light body that goes down smoothly. Arabica’s smoothness makes it an excellent wake-up coffee and an excellent option for more gourmet brewing. You may also notice a slight taste of chocolate, caramel, and nuts with this species. This mixture of aromas and flavors makes this a great option for those who want a classic cup of tasty java.

As the most popular coffee beans on the market, Arabica has many varieties (also known as varietals). Some of my resources reported as many as 40 different varietals!

The most common types are:

Most varietals have a relatively rich and flavorful cup of coffee.

If you’re not drinking Arabica coffee beans, chances are you’re drinking Robusta. While they take up a significantly smaller portion of the market, they still make up between 20-30% of the world’s coffee. Again, my research varied on this topic, with some reporting it took up at least 30%, while others claimed it was closer to 20-28%. Whatever the case, it makes up most of what’s left after Arabica.

Robusta is grown primarily in Indonesia and Africa, though it also grows heavily in Vietnam. It is also available in Brazil, Bahia, and Rondonia. The latter country produces the second-largest Robusta crop, as it focuses primarily on this coffee bean. But why does it remain the second most popular option? First, let’s take a look at its taste profile to find out more.

Robusta is often considered a more intense alternative to Arabica. It lacks the sweetness and softness of that popular bean and has more of a kick to it. Some say it’s a darker option, but that’s not entirely accurate. Darkness has nothing to do with bean type and everything to do with roasting. You can find dark Robusta beans, of course, but they’re not inherently darker than Arabica.

They are more potent and powerful than Arabica, though, with twice the amount of caffeine. The high-caffeine coffee you see in the supermarket is most likely a Robusta variety. Expect a slight peanut aftertaste with this drink and more of a “coffee” kick. You aren’t going to get the kind of fruity touch you probably love with Arabica, so be prepared for that slight letdown.

Robusta doesn’t have a lot of varietals because it’s simply not as in high demand as Arabica. Most actually blend the two types of beans together to produce a hybrid.

This step helps to cut back on the intensity of the Robusta bean and makes their coffee a bit more enjoyable. Options like Kopi Luwak, Icatu, Rondonia beans, and a few other options. Honestly, I found little about these varietals online, but I know that Icatu and Kopi Luwak has a smoother and less caffeine-rich blend than other Robustas.

If you’ve done your research on coffee beans before reading this article, you’ve probably never even heard of Liberica beans. Unfortunately, that’s not an uncommon situation. Liberica beans make up just 2-5% of the world’s population – perhaps even less. In fact, it was close to extinction more than once, meaning that when you do find Liberica coffee, it is often quite expensive.

Typically, it is what many in the West call an “heirloom” species, meaning that it’s more of a luxury option for those with a bit of money to spend. Australia has labeled in a “heritage” variety, which means more or less the same thing. Many coffee drinkers in the US have probably never had Liberica before. In this way, it’s the ultimate hipster bean variety. “I only drink Liberica” is something you’ll hear only the biggest and most amusing coffee snobs say.

Those who have drunk Liberica coffee end up becoming pretty big fans, interestingly enough. Its taste profile is kind of like a mixture of Arabica and Robusta in some ways. It contains hints of dark chocolate, ripe berry, and even a spice kick. The aftertaste is generally described as fairly smoke or nutty, with even a floral touch. However, these undertones are pretty smooth and enjoyable.

When I tried Liberica coffee, I couldn’t get dark chocolate off of my mind. It’s hard not to taste traces of this delicious food every time you have a cup. Expect a reasonably pungent aroma, as well, one that will definitely get your coffee-sense tingling.

Fun fact: Liberica coffee beans are often used as a body scrub in local spas in the Philippines! There’s something you don’t hear every day.

As you can imagine, a rarely drank coffee bean does not have a ton of varietals from which to choose. The most popular of these options is probably the Kapeng Barako bean. If you’ve ever heard of Barako coffee, this is the bean it uses. It produces an incredibly strong flavor and a rich smell that makes it very popular for many coffee connoisseurs. Unfortunately, the other varietals I discovered were even rarer than this option, and taste profiles and descriptions were very hard to come by in my research.

We’re getting into the really rare or hard-to-find stuff. The Excelsa coffee bean is the hipster-hipster coffee bean. “Oh, I like Liberica, but I’m over it: I’m more into Excelsa now!” The irony here is that Excelsa is often labeled a variety of Liberica in some coffee circles! That said, I found enough people claiming that their taste was different enough from Liberica to warrant a separate section.

In a way, it’s something like the Pluto debate: is it a planet or an asteroid? In my opinion, the Excelsa has a different enough taste and aroma profile to warrant a separate section. While it does share many characteristics with the Liberica bean, it also differs in almost as many areas. So, let’s take a look at the reasons why I think it should be classified as a separate bean option.

Excelsa coffee beans mostly come from Southeast Asia and contain similar tastes and aromas compared to most beans grown in this area. I’d describe their beans have had a very tart flavor, which is probably why they’re not very popular. Those who love tart drinks will flock to Excelsa in droves. But tartness is not for everybody, and the kick produced by Excelsa may drive away some potential coffee drinkers.

However, I also found a very distinct fruity taste to these beans and a very sharp aroma that was an excellent alternative to the gentler Arabica or Robusta beans. If you thought Robusta smelled potent, you haven’t had a cup of Excelsa. I think it’s a good choice for those people who want a cup of coffee that genuinely kicks their butt in the morning. I’m going to skip the varietal section here, as Excelsa itself is considered a varietal of Liberica.

How to Choose Coffee Bean Type

Which of these coffee bean varieties is the “best”? Frankly, that will depend entirely on your taste. If I’m to be honest, most people will probably be just fine with Arabica coffee beans. They’re so popular and widespread that it’s honestly hard to find coffee that isn’t made from Arabica beans. For example, most American coffee drinkers have probably never had a non-Arabica coffee in their life.

That said, each bean has something unique to provide a drinker. For example, do you love caffeine-rich drinks and want a cup of coffee that is closer to an energy drink in its caffeine levels? Then Robusta is the right choice for you. I like to drink a cup of Robusta every once in a while, especially when I have to get up very early. There’s nothing quite like Robusta to get you focused when you need it the most.

The other two beans are worth experiencing, however, especially if you’re an adventurous drinker. Though I poked a little fun at coffee hipsters earlier, they do have a point: Liberica and Excelsa have unique taste profiles that you can’t get with Arabica or Robusta. So I would suggest trying them out if you want a blend with more of a kick to it. Excelsa, in particular, has the kind of sharp aroma and flavor that bored coffee fans may end up preferring.

When it comes to coffee beans, I think it’s best to go with your gut instinct (pun definitely intended). Try out a few of these options to see which suits best for your stomach and meets your taste preferences. I think you should know pretty quickly whether you want to stick with your trust Arabica or delve deep into the world of Excelsa beans.

Use the information here to steer yourself towards the best cup of coffee. You’ll be glad you took the time to weigh your options and pick a bean that suits your needs. Most importantly, have fun!