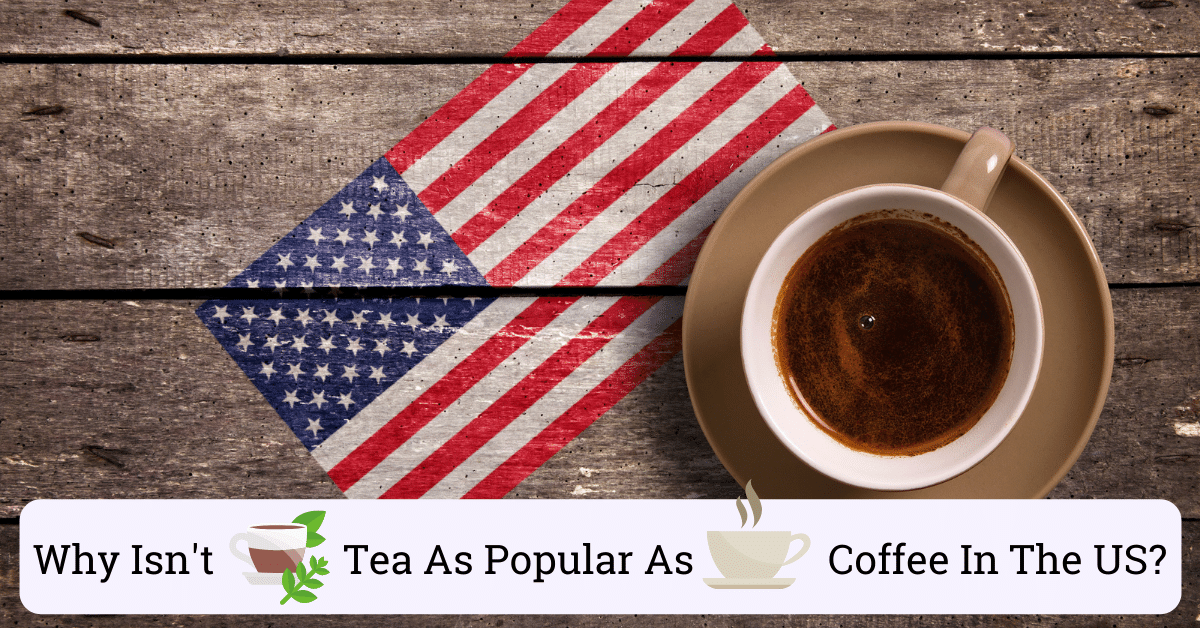 In the United States, tea isn’t as popular a beverage as it is in other parts of the world, and coffee seems to be the preferred hot caffeinated beverage in American culture. But why isn’t tea as popular as coffee in the US as it is in places like the UK? We have the answers.

Americans’ preference for coffee over tea is grounded in historical factors, such as the tea taxes that led to the outbreak of the American Revolution, along with cultural factors such as the perception of tea as feminine, its preparation time, and its failure to resonate with the working class.

Americans’ reluctance to incorporate tea into their everyday lives in the same way they embrace coffee is far more complicated than being a matter of preference. So let’s explore some of the reasons why tea isn’t as popular as coffee in the US.

A 2021 survey of US adults between 18 and 64 found that 59% of Americans consume coffee daily, and only 47% drink tea every day. However, almost all of Asia and anglophiles residing across the Atlantic in the United Kingdom prefer tea, along with other former British colonies like South Africa and Australia.

So why, if America is culturally similar to these other English-speaking nations, is tea excluded from US consumer norms?

The most pertinent reason for America’s aversion towards tea as a popular hot beverage comes down to the historical context.

In 1767, the British parliament imposed duties on tea imports upon British colonies through the Townshend Acts. It was a way to hamper their colonies in the New World and elsewhere economically. Following this, the 1773 Tea Act was passed to grant the British East India Company a monopoly on tea sales, much to the ire of the colonists trying to build a new life for themselves.

The Tea Act resulted in kickback in the form of the Boston Tea Party, where revolutionaries destroyed 92,000 pounds of tea in the Boston Harbor. This was the event that many believe to be the first blow landed in what would evolve into the Revolutionary War and, ultimately, the foundation of the United States as we know it today.

Consequently, tea became a symbol of tyranny and colonial subjugation, and the perception hasn’t changed much.

However, at the same time, coffee steadily established itself as the drink of choice for Americans from the mid-19th Century, when the industry exploded, and it became a more affordable alternative to tea. This is due to some inherent differences between coffee and tea that resonated with ordinary Americans through the 20th Century.

Tea Doesn’t Give You The Same Caffeine Boost As Coffee

While tea and coffee are both caffeinated beverages, coffee certainly has a higher concentration and can therefore give you a much-needed energy boost.

Tea, however, is considered a slower beverage that doesn’t offer the same get-up-and-go kick that has become ingrained in American culture and is a significant reason behind the tendency to start our mornings off with a cup of coffee.

Coffee Is Better For Work Environments

Coffee has become associated with all work environments, and going for a “coffee break” has become embedded in our vernacular, showing how deeply it is rooted in our culture.

Coworkers spend most of their time intermingling in the office kitchen around a coffee pot, and it helps that coffee can be brewed a lot faster than tea, meaning it is far more productive. Not to mention, coffee is more affordable and therefore accessible to the working class.

Going for a cup of coffee has become synonymous with meeting a friend to have a conversation or a catch-up. In contrast, the social act of brewing a cup of tea is far less suitable to our fast-paced lives and is considered to be elitist – which, once again, is due to historical associations with the British.

Americans will offer you a cup of coffee when you visit them at home as a way to get the conversation started, and, through association, all Americans have taken on the cultural practice of using coffee as a social lubricant.

There’s no real explanation for why, but many people suggest that Americans came to consider tea to be an effeminate drink in the early 20th Century because of the British association with tea.

It was also associated with minorities like the Irish, Chinese, Japanese and Jews, meaning that it was opposed to their perception of what can be considered acceptable cultural values for Americans at the time.

One of the ways in which the tea industry has tried to escape this perception is by producing ready-to-drink iced tea, which was considered more masculine and remained the most popular of all tea beverages in the US – making up roughly 80% of all tea products bought by Americans.

Setting aside cultural norms and historical context, the primary reason behind the popularity of coffee in the United States is that the market is enormous.

Until recently, you would not have had an extensive selection of teas available throughout the US, and the bare-bones market didn’t have much to offer consumers. There are very few tea shops in the US, and coffee shops are practically ubiquitous.

And the coffee industry itself is enormous. Global coffee production reached over 160 million bags of coffee in 2020, with each bag measuring 60 kilograms (132lbs). That’s more than 10.5 million tons –in comparison to global tea production of 2.9 million tons per annum.

So, coffee has simply taken a much bigger market share, and people have become creatures of habit, maintaining the status quo. At best, drinking tea has become part of American subcultures, but it doesn’t seem likely to resonate with mainstream markets anytime soon.

Coffee is the most popular beverage for Americans, and it seems unlikely that tea will be competing with it as the hot, caffeinated drink of choice any time soon. However, there are many explanations behind the country’s divergence in culture from other English-speaking nations.

America has a long history of grievances with tea in terms of taxes and import duties. But the unique characteristics of coffee as a beverage that is easier to prepare, more affordable, and packs more caffeine is also far more suitable to Americans’ daily lives.

Given the size of the coffee industry in comparison to the tea industry, another massive barrier that prevents tea from finding its way into the hearts of ordinary Americans is that it is dwarfed by the volume and variety of coffee available to everyone in comparison to the smaller quantities and selections of teas available.