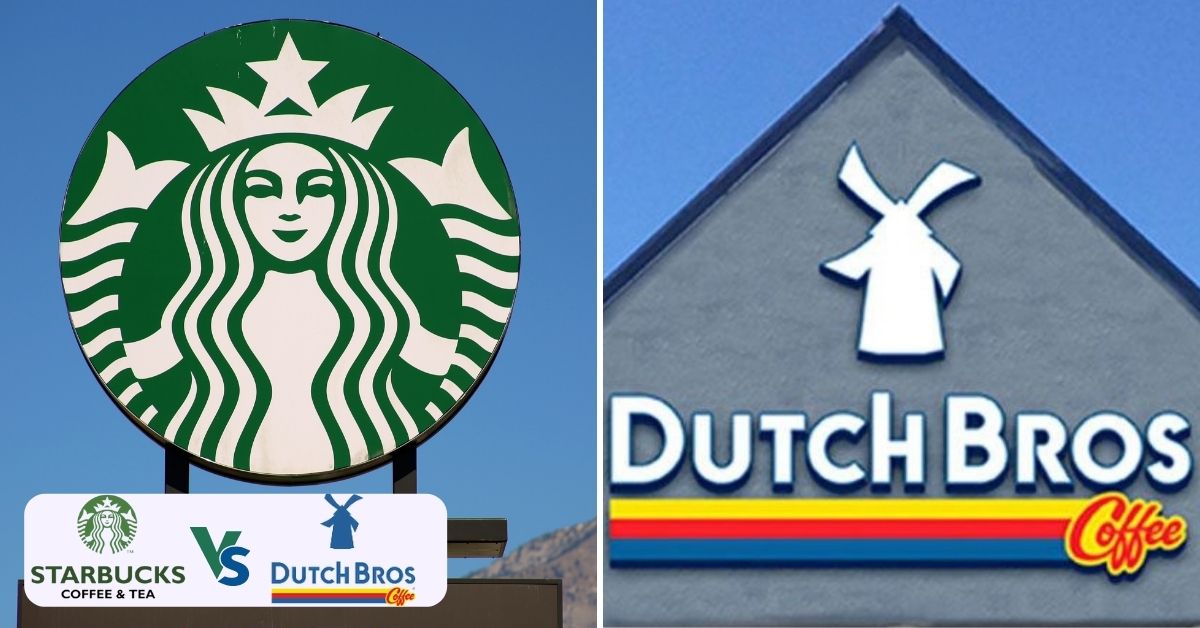 As a coffee fan, I am constantly looking for new and exciting coffee branches to explore for that next caffeine fix, delicious snack, or novelty drink. Dutch Bros has arisen as a big name, but how does it compare to Starbucks?

In terms of coffee, while it is generally more expensive than most other franchises, Starbucks would be seen to have a better section and superior quality over Dutch Bros. However, for its price, novelty drinks, and speedy service, Dutch Bros is a firm favorite for coffee lovers on the go!

Although Starbucks remains my personal favorite over Dutch Bros, there are many advantages and disadvantages that provide different experiences, prices, and products to consumers; let’s explore some of them now!

Having started in 1992, Dutch Bros has quickly gained popularity to become one of America’s fastest-growing coffee brands, actively competing with established franchises such as Starbucks and Dunkin’ Donuts.

At present, there are over 470 Dutch Bros in the United States, mainly on the West Coast of America, with plans to expand their foothold further in the Mid-West and the East Coast in the coming years!

Unlike its competitors which opted to create spaces for families, friends, and work colleagues to gather for extended periods of time in a sit-down space, Dutch Bros is unique for its fast and efficient service.

In fact, having a drive-thru model at the majority of its locations has not only made it a popular spot for coffee lovers on the go but was essential to their business model thriving under pandemic conditions while their competitors downscaled.

While you would assume this would be an impersonal experience, most reviews praise Dutch Bros’ staff for their friendliness, attention to detail, and positive attitude, making all their customers feel welcome despite the length of their stay!

Furthermore, Dutch Bros understands the busy lives of their clientele (many of which are students and young professionals); therefore, many of their branches sport 24 hour opening hours, so you can grab that caffeine fix at any hour of that long study session or late-night grind at the office!

While Dutch Bros sports all your regular coffee shop classics such as espressos, cappuccinos, and lattes, it has further differentiated itself from the competition with a wide variety of popular drinks.

Designed for the more adventurous caffeine fans out there, Dutch Bros has both sugar and sugar-free custom energy drinks in the form of Rebels! Rebels are a must-try with zesty flavors, vibrant colors, and equally electric names such as Aftershock and Shark Attack!

Given its dedicated customer base, Dutch Bros has been rolling out some excellent reward systems for loyal customers, all of which can be easily earned and monitored via the Dutch Bros app available on both GooglePlay and the App Store.

With a general rule of 5 points earned for every drink bought, a free drink can be earned in no time! A generous offer considering Dutch Bros’ affordability when compared to its competitors.

As one of the first coffee franchises in the world, Starbucks has grown from a small establishment in Seattle in 1971 to become one of the most recognizable and beloved brands in the world!

Starbucks built its international reputation of providing customers with a variety of unique drinks, relaxed atmospheres, world-class customer service, and its signature use of names on cups to make customers feel welcome.

Having set the industry standard of what it means to run an internationally successful coffee franchise, Starbucks remains one of the leaders in the field and has justified its customer loyalty with consistent practices and quality globally.

Although Dutchbros has a greater variety of drinks on its menu, Starbucks would be seen to use better ingredients and brewing methods in comparison to Dutch Bros, making its core product of coffee a superior version.

Despite its “new kid on the block,” monicker Dutch Bros does lag behind Starbucks in some areas.

Although Dutch Bros does have a wide variety of exciting drinks, it lacks Starbucks’ approach to a holistic coffee house experience, meaning that it doesn’t sport the variety of food or merchandise on offer at Starbucks branches.

While Dutch Bros is by no means inferior to Starbucks or its coffee competitors, being one of the more affordable coffee franchises means that certain cost-cutting measures are implemented in their business model.

Most notable is that Dutch Bros does not match Starbucks’ quality in products that overlap, such as their coffee or food.

Although Starbucks remains the biggest coffee franchise in the world, it has its shortcomings compared to Dutch Bros.

Despite being a trillion-dollar company with global branches, Starbucks is not known for producing cheap food such as other global franchises like KFC or Mcdonald’s.

While these costs are usually offset by the quality of their products, the level of service provided, and the high-class locations and décor of many of their branches, it still means that Starbucks should be more of a treat than the go-to place for one’s daily caffeine fix!

Further to this, despite their increased costs in relation to Dutch Bros, Starbucks does not have a reward system as generous and complete as Dutch Bros.

While Dutch Bros, as a relatively new franchise, does its utmost best to sell, market, and explain its products to new customers, Starbucks relies on brand recognition alone in which to promote its long-established menu.

Although this doesn’t faze established, loyal customers, new customers to Starbucks have often found the menu to be vague and confusing.

In conclusion, while it may appear at face value that Dutch Bros and Starbucks, as competing coffee franchises, offer the same service and products, their different business models mean that there is plenty for fans of either to enjoy from the other!