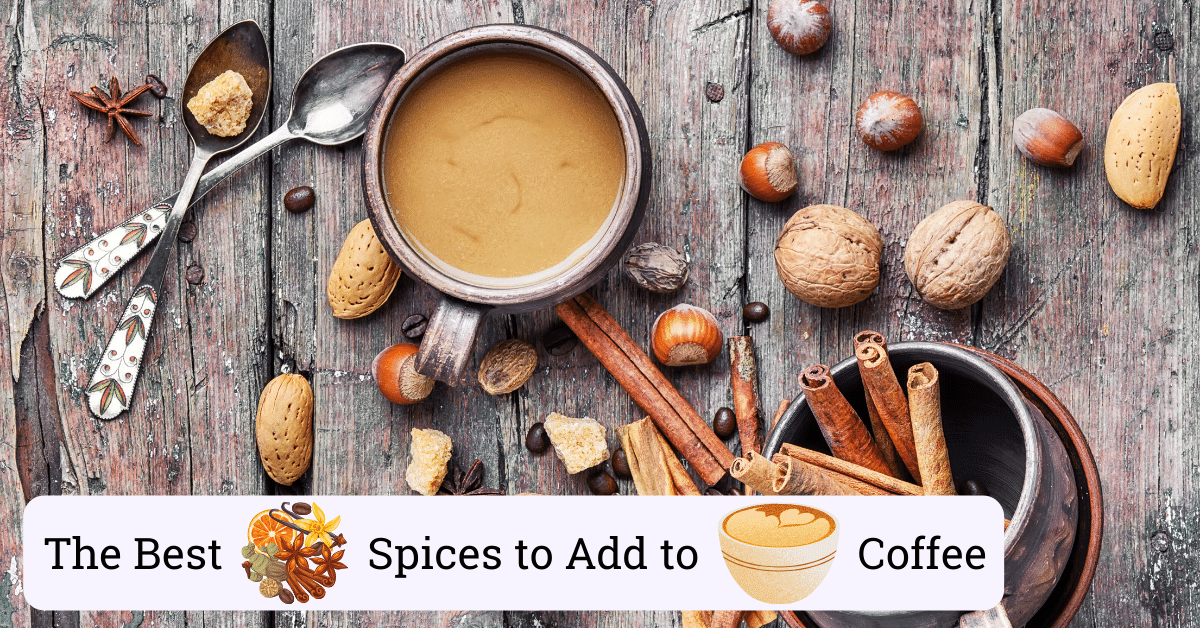 Almost everyone on the planet drinks a cup of coffee at some point in their day, and this makes coffee one of the most popular drinks of all time. However, the familiarity of coffee may lead some people to seek extra ingredients to add new flavor dimensions to their coffee. One such method is to add spices to coffee. Let’s talk about the spices that work well in coffee.

Adding spices to coffee adds a new dimension of flavor to the drink and marks a coffee as unique and different from others. Cinnamon, cardamom and nutmeg are some of the most popular and are excellent spices to add to coffee to improve flavor and highlight the best flavors of the coffee.

Adding spices to coffee, in fact, is not a new idea. Many people groups throughout history have added various spices to coffee to enhance it or to improve brew methods. Let’s discuss some of the best spices to add modern coffee to add a new dimension of flavor to one of our favorite drinks.

The 3 Best Spices to Add to Coffee

Adding spices to coffee has been done all over the world for many generations. Many people groups and cultures add particular spices to their coffee, which marks their coffee as unique and separates it from coffee drunk elsewhere in the world.

Adding spices to your coffee can help to add extra flavor that may enhance the drink according to your preferences but adding the right spices may even have some nutritional benefits too.

There are many spice varieties that work well with coffee, but there are three that stand out when considering which work best. These three spices add flavor to the coffee in a unique way and will draw flavors from the coffee that you may never have experienced before.

Adding one or all of these spices to your coffee is a great way to enhance your morning. Each spice may be used individually or combined together into the same cup, depending on your preferences.

Let’s examine the three of the best spices to add to your daily coffee.

Adding flavor to coffee is easily done, but there is nothing quite like cinnamon. Cinnamon can be added to coffee in various brew stages, and each stage adds a slightly different cinnamon flavor profile into the drink.

A favorite among many coffee lovers is adding ground cinnamon to the ground coffee before brewing. This is the most efficient way of adding cinnamon to coffee and leaves no cinnamon grinds at the bottom of your cup.

Cinnamon can also be added to coffee after it has been brewed. This will involve adding a small amount of cinnamon to the coffee once it is already in the cup after brewing and stirring to allow the cinnamon to incorporate as much as possible into the drink.

This will result in a cinnamon flavor that is less intense than if it were added before brewing, but the flavor is still very much present within the drink. Let the drink settle before sipping when adding cinnamon in this way.

Cinnamon may be added to coffee after adding milk or cream to the drink. This will both add flavor to the drink and add a new dimension of aesthetics to the drink as well.

The flavor that cinnamon adds to coffee reminds many of the festive seasons and family holidays, as this warm spicey flavor brings nostalgic heat to many flavor palates.

Cinnamon will add a warm, spicey, intense flavor to a cup of coffee that is very pleasant. Many people prefer the flavor combination of coffee and cinnamon over straight coffee. Cinnamon enhances the flavor of coffee rather than simply adding its own flavor to the beverage and is among the most popular spices for adding to coffee.

Cardamom may not be the first spice that one may think of for adding to coffee, but this spice is surprisingly excellent when added to coffee properly. Cardamom is native to India but has spread internationally and has since become a staple in many countries throughout the world.

Adding cardamom to coffee adds a very intense, very aromatic flavor that is unlike anything else. Cardamom in coffee is an experience that is well worth having for every coffee drinker, as it elevates coffee to entirely new levels of flavor and drinking experience.

The best way to add cardamom to coffee is to add ground cardamom to ground coffee before brewing. The cardamom must be ground to the same size as the coffee or finer for best results.

Just be sure to add cardamom in moderation to your coffee because it tastes even more intense than it smells.

Nutmeg adds a depth of flavor to coffee that is unparalleled and may become your standard coffee addictive once you try it for yourself.

Add a little more nutmeg to your coffee than you would cardamom, as this spice is less intense and less abrasive than cardamom, but still tread wisely when using nutmeg in coffee.

Adding spices to coffee is one of the best ways to bring new dimensions of flavor and texture to one of the world’s favorite beverages.

Cinnamon, cardamom, and nutmeg are among the best spices to use for this purpose, as they all go well with coffee and ad their own unique flavor profiles that really do add something special to coffee.

These spices can be used individually or added in combination with coffee but be sure to tread carefully and only add a small amount of each spice to your coffee, as they are all quite strong tasting and may ruin your coffee than add to it.

Increase the amount of spice that you use according to your own references, but always start with less and increase from there.