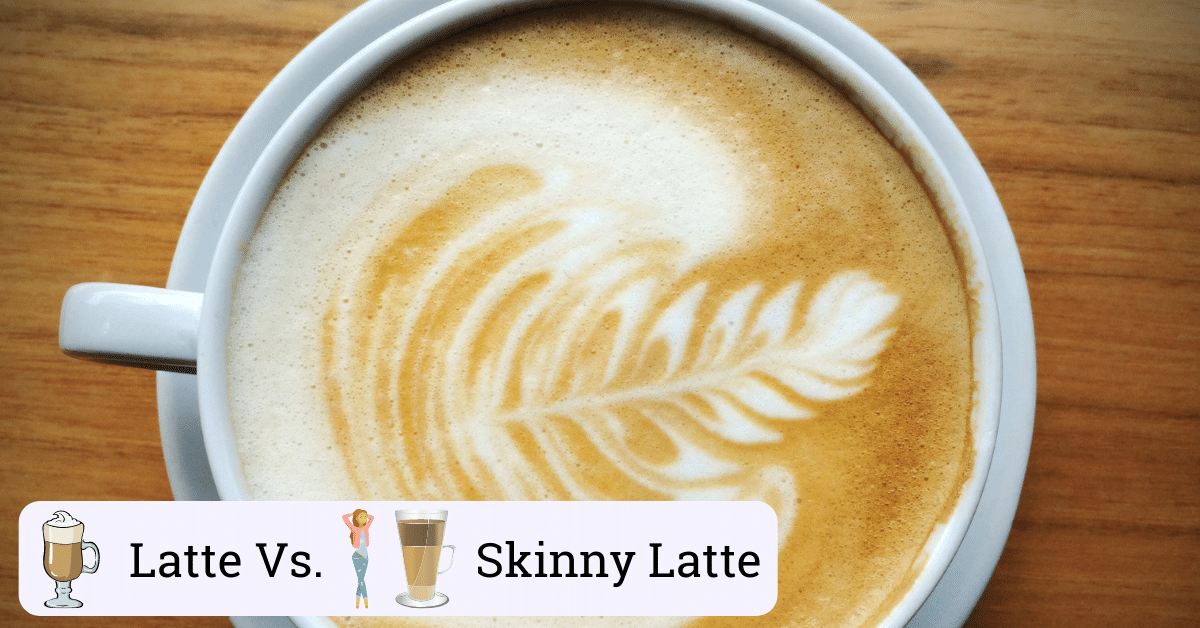 When ordering a Latté in a café, there is often an option to order a Skinny Latté rather than a regular Latté. This has led to much confusion, and there are many who are unsure about what the difference is between these two espresso-based drinks. Let’s clear up the confusion for everyone.

What Is A Skinny Latté?

The idea behind a Skinny Latté is that it has fewer calories and particularly less fat and sugar than a regular Latté.

The traditional Latté is made with two shots of strong espresso, as this is meant to be a breakfast drink, but anything with a double shot of espresso tastes very strong.

To counteract the strong taste of the espresso, the Latté is prepared with a large volume of milk, typically between 7 – 10 ounces of milk. This is quite a lot of milk for a coffee drink, and this equals a large number of calories, particularly in the form of fat when whole milk is used.

In addition to the milk, many modern recipes use various syrups and sugars to make the drink even sweeter than it would be with only milk and espresso.

This results in a coffee drink that is very high in calories from sugar and fat.

A Skinny Latté aims to be a sugar-free, fat-free, reduced-calorie drink with the same full and rich flavor as a regular Latté. This is achieved by the use of skim or non-fat milk, sugar-free syrups, and sweeteners rather than regular sugar.

How Does A Skinny Latté Compare To A Regular Latté?

The recipe for a Latté and a Skinny Latté remain largely the same. These drinks may be prepared with one or two shots of espresso, they may be made with flavoring syrups, and the size of both drinks varies depending on the barista that prepares them.

The true comparison between these drinks is how they are to drink.

The Latté is a heavy, rich drink that is typically made with two shots of espresso and is served in a large glass due to the high volume of milk in the drink.

The whole milk used in the regular Latté makes for a very rich, creamy, thick, and heavy drinking experience. The heavy whole milk balances the depth of the double espresso well.

On the other hand, the Skinny Latté is much lighter due to the fat-free milk. This milk is so light that it changes the texture of the drink, and the drink itself is even lighter in appearance than the regular Latté.

The drinking experience of a Skinny Latté is very different from a regular Latté. The Skinny version feels more gentle in the mouth, far lighter on the palate, and significantly easier to drink than the regular version.

The Skinny Latté is often made smaller than the regular drink due to the light nature of the fat-free milk.

Calories In A Skinny Latté Vs. A Regular Latté

The main difference between these two similar drinks is the calorie content. To properly compare the Skinny Latté and the regular Latté, the number of calories per drink must be compared as well.

The regular Latté may have as many as 200 calories per 8oz serving, and even more with the addition of sugar-based syrups. Sugar-based syrups may make even ad as many as 100 extra calories. The Skinny Latté typically has around 75 calories per 8oz serving, and the addition of sugar-free syrups does not increase the calorie count.

The Skinny Latté is a reduced-calorie, fat-free, sugar-free variant of the traditional Café Latté.

This drink is made with the same method as the regular Latté; the only real difference is the calorie content of the ingredients used.

The regular Latté uses whole milk, sugar, and syrup, while the Skinny version uses fat-free milk, sugar-free syrups, and sweeteners rather than sugar to reduce the calorie count of the drink by more than 200 calories in some instances.