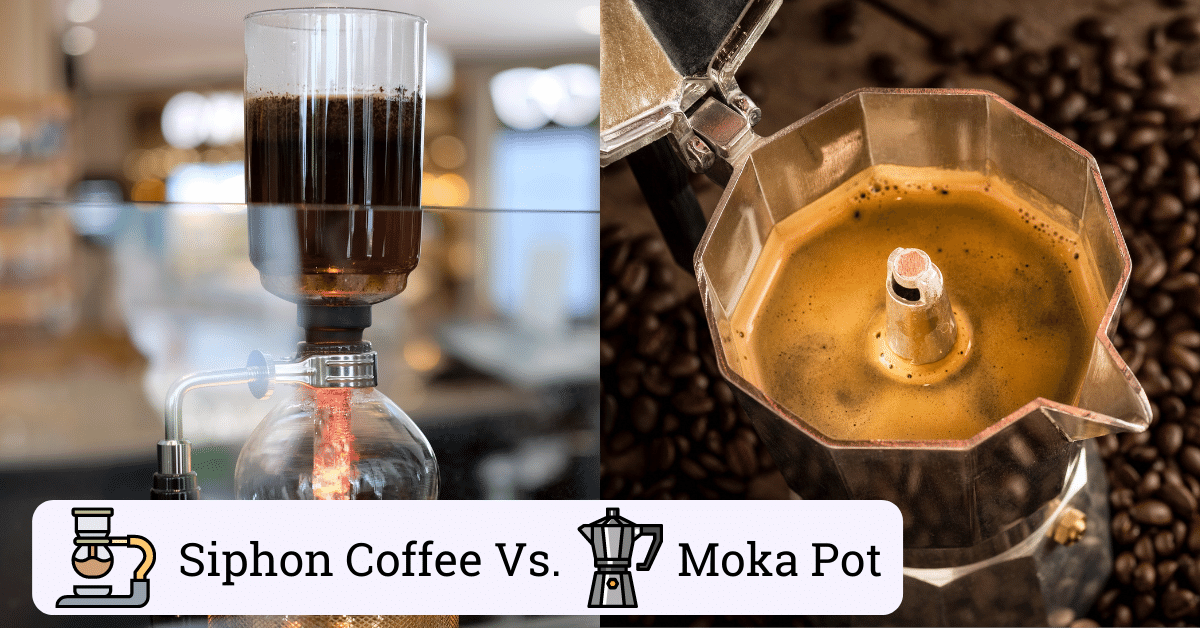 There are countless ways in which to make coffee, with everybody having their own personal preference. Each method differs in terms of how its brewed, and as a result, the final result of the coffee will naturally differ.

Siphons and Moka pots both make use of steam at a high pressure to brew coffee. The main difference lies in the brewing mechanics. As a result, Siphon produces the coffee of a much cleaner consistency, where Moka pot makes intense espresso-like coffee.

Understanding the brewing method and the difference in the resultant coffee will help you to make an informed decision as to which type of coffee maker will be best for you.

Comparison of Moka Pot and Siphon

While these two methods of coffee are somewhere similar, there are some significant differences that create a completely different coffee experience.

To begin with, the ground coffee is situated in completely different sections of the equipment. The siphon makes use of complete immersion with the coffee grounds in the uppermost chamber.

The Moka pot, on the other hand, situates the grounds in the middle section, and so the steam passes through it before moving into the next chamber.

The difference here is that the water only passes through the grounds, while in a siphon the water is able to fully absorb all the flavor from the ground coffee.

The type of filter is another factor that makes an important distinction between the two types of coffee makers. While the Moka pot makes use of a metal filter, a siphon uses a cloth filter. As a result, the coffee produced is of a much cleaner consistency.

In a Moka pot, the water is brought to boiling point in order for the coffee to be brewed. This is very different from the siphon where the constant temperature and constant pressure prevent the loss of coffee’s nuanced flavors to extremely hot water temperatures.

The last significant difference between the two is that while with a Moka pot, the completely brewed coffee is kept in the uppermost chamber, siphon coffee ends up in the lowest chamber after brewing has completed.

Moka pots were originally invented in Italy, and they are still widely used across Europe today. This good-looking coffee pot is probably the best way to make espresso-style coffee without the use of an espresso machine.

The Moka pot is made almost entirely out of metal, and the entire contraption is placed on the stove-top in order to make the coffee you desire. A Moka pot is made up of 3 chambers which are connected by a metal tube.

If the water is not heated prior to brewing, the coffee grounds will spend too long a time in contact with the hot metal surfaces, resulting in coffee with an unpleasant burnt flavor.

As the water heats up in the sealed chamber and reaches close to the boiling point, high-pressure steam is created which forces its way upwards into the next chamber, this one being the gasket.

The steam moves through the ground coffee, and as the boiling continues, the coffee makes its way into the uppermost chamber. What you end up with is an exceptionally strong and flavorful coffee, with the high-pressure steam extracting as much flavor from the coffee as possible.

Another word for the siphon coffee maker is the vacuum pot. This method of brewing has more of a scientific approach, and the machine is nothing short of fascinating with a series of burners and glass tubes.

The siphon has been around for over two hundred years, and the technology has been developed to perfection in this time, with small changes here and there as time has passed. The siphon is also made up of 3 sections, much like the Moka pot, however, these do function quite differently.

The 3 sections making up the siphon are the bottom, middle and upper chamber respectively. Making coffee in a Siphon is a relatively time-consuming process but can be quite an enjoyable thing to watch.

Unlike Moka pot coffee, siphon coffee requires a certain degree of skill to brew, as the machine makes use of vacuum and high water pressure. Instead of boiling the water in order to brew the coffee, a siphon heats the water slowly at a consistent temperature.

As the temperature rises, so does the pressure, and when the pressure in the lower section becomes higher than that in the chamber above, the water is forced upwards into the topmost chamber. This is the section where the coffee grounds are placed.

What makes the biggest difference is the fact that the uppermost chamber never reaches boiling point, thus preventing your coffee from becoming overheated and risking the loss of flavor altogether. The act of boiling has a tendency to cause the loss of many subtle flavors.

The constant heat in the lower section allows the coffee to brew at a consistent pace, and when the brewing has completed, the siphon is removed from the heat. As a result of this, the pressure in the lower chamber will drop, and your coffee will move back through a filter.

As a result, your coffee is extremely flavorful as the water and the coffee grounds have had the opportunity to immerse fully.

While both Moka pots and siphons use relatively similar methods to brew coffee, the end result is almost entirely different in terms of its taste and its texture.

What is important is that you try coffee made properly using each of these methods, and see which option you prefer. This will help you to make an informed decision regarding the coffee.