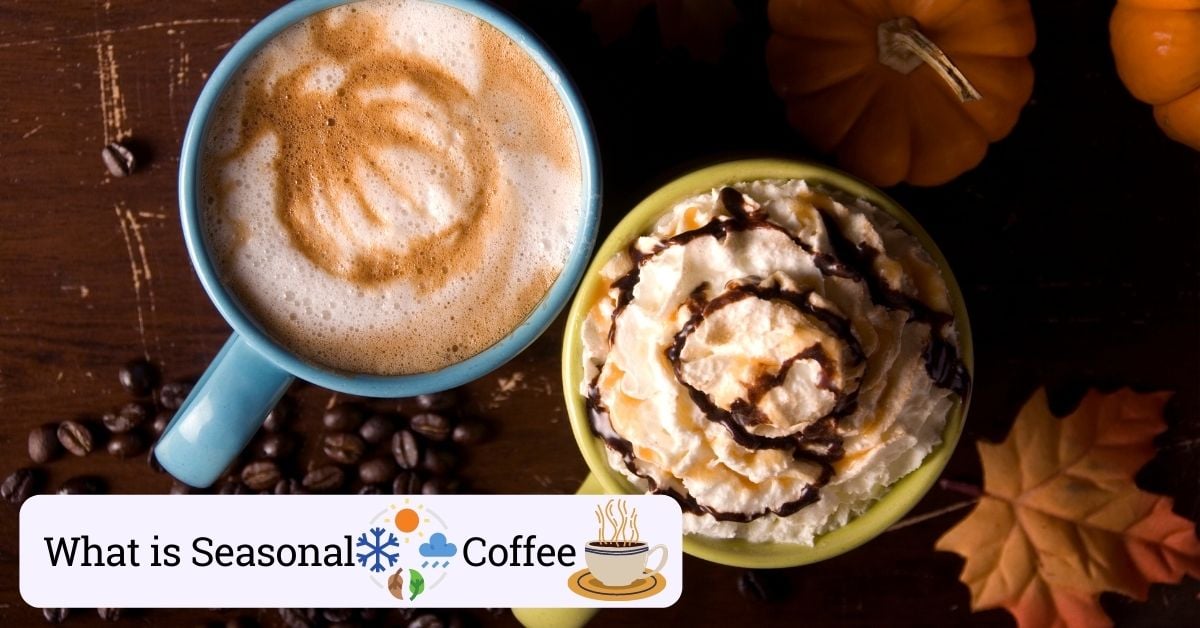 As a coffee connoisseur, you’ve probably encountered the concept of seasonal coffee. But what is seasonal coffee? How does it affect you and your experience of coffee in terms of taste and quality?

Seasonal coffee is a coffee blend offered only at a particular time of year due to harvest seasons in different regions. They are roasts from origin countries that are only available at a specific time of year. The most popular seasonal coffees originate in Colombia, Brazil, Rwanda, and Ethiopia.

So, seasonal coffee just means that the coffee is only available during certain months of the year? Not at all! Whether your coffee is in season can dramatically affect the taste and your experience of any given cup of coffee.

How Is Coffee Affected By The Seasons?

Coffee, as a fruit, is seasonal, which means that it will always have slightly different tastes from harvest to harvest. And these sensory properties are determined by several environmental factors.

Coffee roasters should strive to create a consistent roast, particularly if you’re looking to establish a loyal base of customers. This means they have to profile and create a blend to take on a specific taste to ensure that customers can rely on them to offer a consistent taste throughout the year.

However, a roaster can also make seasonal coffee blends that account for harvest timelines and each season’s effect on the blend’s taste. These seasonal blends will allow them to roast a consistent and fresh coffee before rotating to the next seasonal blend once the current blend moves out of the season.

What’s most important, however, is that the seasonal coffee remains fresh, which will give drinkers the ability to taste the specific coffee’s unique flavors and characteristics.

Beyond the time it takes to harvest the coffee cherries, there are processes like drying and milling, which can take several weeks.

However, it’s not just the harvest timeframes that will affect a seasonal coffee blend because other processes, such as shipping, will affect it, and it could take months. So, an Ethiopian coffee that is generally harvested between October and December will only arrive at the roaster in February or March, for example.

Other factors that could affect the freshness of seasonal coffees include political events, supply chain disruptions, and weather conditions.

What Are The Benefits of Seasonal Coffee Blends?

By opting for a seasonal coffee blend, you can source fresher beans that enhance your coffee taste. Finding the right blend from the right origin and brewing specific blends during the correct season means that you can ensure consistency in taste and flavor profiles.

Furthermore, by roasting coffees in season, you can expand your tastes and venture beyond your tried and tested favorites. You can also enhance your brewing abilities by learning the right way to roast particular seasonal blends, rather than a one-dimensional approach where you roast the same blend of coffee all year long.

Once you have expanded your repertoire, you can find the most dependable coffee blends for each season, knowing which blends will produce specific tastes and how to get the perfect cup of coffee for each one of them. By mixing things up, you can broaden your horizons as a coffee brewer and a coffee taster.

When Each Coffee Origin Is In Season

So, if you’re looking for a specific coffee and want to know when the best time to buy it is, or if you want to know which coffee to buy in a specific season, here’s a look at the different countries around the world that produce coffee beans and when they are in season.

Coffee beans are harvested from October through to March in Central America, but their freshest blends will ship to the United States between April and July.

Cherries are generally harvested from September through March in Cuba and the Dominican Republic. On the other hand, Jamaica will harvest its coffee between February and June. Jamaican coffee blends should arrive in the US in August, while Cuban and Dominican coffee blends will normally be shipped to the US between April and July.

As we move below the equator into South America, the seasons change. In Brazil, coffee is primarily harvested between April and October (although climatic conditions are changing) and will typically arrive in the US by December. Peru’s harvesting season lasts from March to September and will usually hit US store shelves by October.

Depending on the region, Colombia can harvest coffee all year round, but most of the coffee will be harvested between October and March.

Harvesting takes place between September and January in Uganda and Tanzania and will typically hit the shelves between February and March – although there are frequently delays between ports which could extend this period.

Coffee is harvested between October and February in India but will only reach American shores by April or even later if monsoons affect the harvest.

Indonesia harvests its coffee from June to December but can be harvested from September onwards with some roasts. You can expect them to arrive in the US between April and May.

In Papa New Guinea, harvesting begins in May and ends in September. They can be found in US stores from December onwards.

The Most Popular Seasonal Coffee Drinks

Your pallet for different coffee blends will eventually change from season to season, and many specific flavors have become particularly popular among consumers. Here are some of the best flavored coffee drinks for every season: