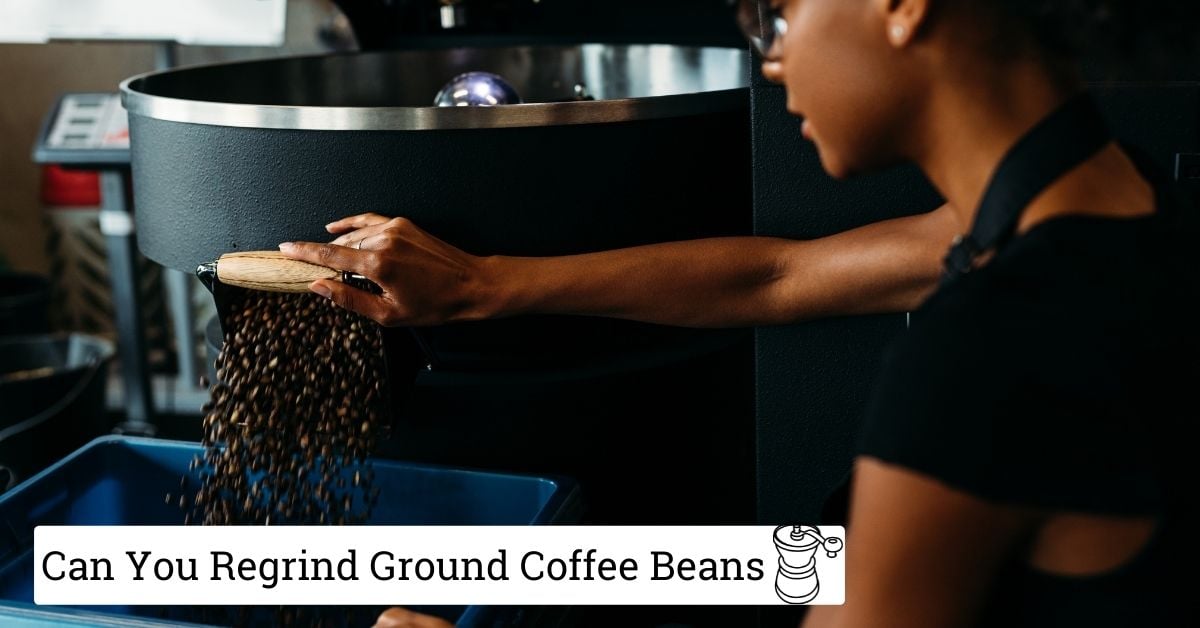 You can regrind coffee that has already been ground. Using the right technique is important. Never add a full load of ground coffee to a grinder, or it may jam. Grinding coffee twice may improve your brews if done well. Pre-ground coffee should always be reground for methods such as espresso.

Can You Regrind Pre-Ground Coffee Beans?

Understanding the correct grind size for the type of coffee brewing that you prefer is imperative for producing a good cup of coffee. Coffee that is ground too finely will over-extract or be difficult to brew, and coffee that is not ground fine enough will under-extract and produce a disappointing brew.

For this reason, many coffee drinkers find themselves wondering if it is possible to regrind pre-ground coffee beans to the correct grind size for their brew method?

This means that regrinding coffee like this should only be made with a hand-held manual coffee grinder. The other issue with regrinding pre-ground coffee is that the process may produce a lot of very finely ground coffee that may end up stalling a brew, especially an espresso brew.

Can You Grind Coffee Beans Twice?

Another commonly asked question around regrinding coffee is whether or not it is possible to grind coffee beans twice for better brewing results?

Grinding coffee beans twice, otherwise known as regrinding, can be an effective method for improving certain coffee brews. There is a correct way and a poor way to perform this method, however, so it should be done with care.

To properly regrind coffee beans in this way, the beans must first be ground very coarsely, in fact, as coarsely as your grinder will allow. Once this process has been completed, the coarsely ground coffee should be run through the grinder again, only this time on a very fine grind setting according to the brew method used.

For the best results, the coarsely ground coffee should be introduced to the grinder very slowly. This prevents fines from being reground and only regrinds the larger chunks of coffee.

Most coffee drinkers who have used this method have reported positive results, stating that the brew tastes more well-extracted and much sweeter than otherwise.

When Does Regrinding Make Sense?

Regrinding can cause some problems with brewing coffee and the equipment used to brew coffee. Brewing coffee is a surprisingly finicky process if you want to brew very good coffee, and it can be challenging if some aspect of the method is not as it should be.

The process of regrinding already ground coffee beans has been known to ruin some grinders, and it can produce a lot of fines which is detrimental to a brew. However, it does make sense in some instances to regrind coffee beans.

It makes sense to regrind coffee beans when the beans are not ground fine enough for your brew method. This may occur if the grinder is accidentally on a coarse setting or if you buy pre-ground coffee beans.

In this instance, with the right method, regrinding coffee beans will improve the brew and the brewing process rather than using the coarse grind size for the brew.

If you have to regrind coffee for this purpose, it is important to do it carefully. Always introduce already ground coffee into a grinder very slowly rather than all at once, especially with electric grinders. Hand grinders are less sensitive and delicate, but adding a large amount of ground coffee into any grinder may cause it to get clogged, as they are not designed for this purpose.

How Does Regrinding Affect The Brew?

Regrinding coffee beans that have been ground to some degree already can vastly improve the brew, or it can detract from the brew depending on how well the process is executed.

If you regrind coffee beans that have already been ground without adding the coffee to the grinder slowly, it will produce too many fines for the brew. Fines are incredibly small particles of coffee beans that tend to stall brews or become over-extracted leading to poor brew quality.

Fines can also be so small that they make it through filters, which means that they end up in the cup, which also detracts from the flavor of the brew.

Pour over brews become sweeter and lighter when regrinding is done well, and the same is true for almost all other brewing methods. Overall, regrinding can improve coffee, but it must be done correctly.