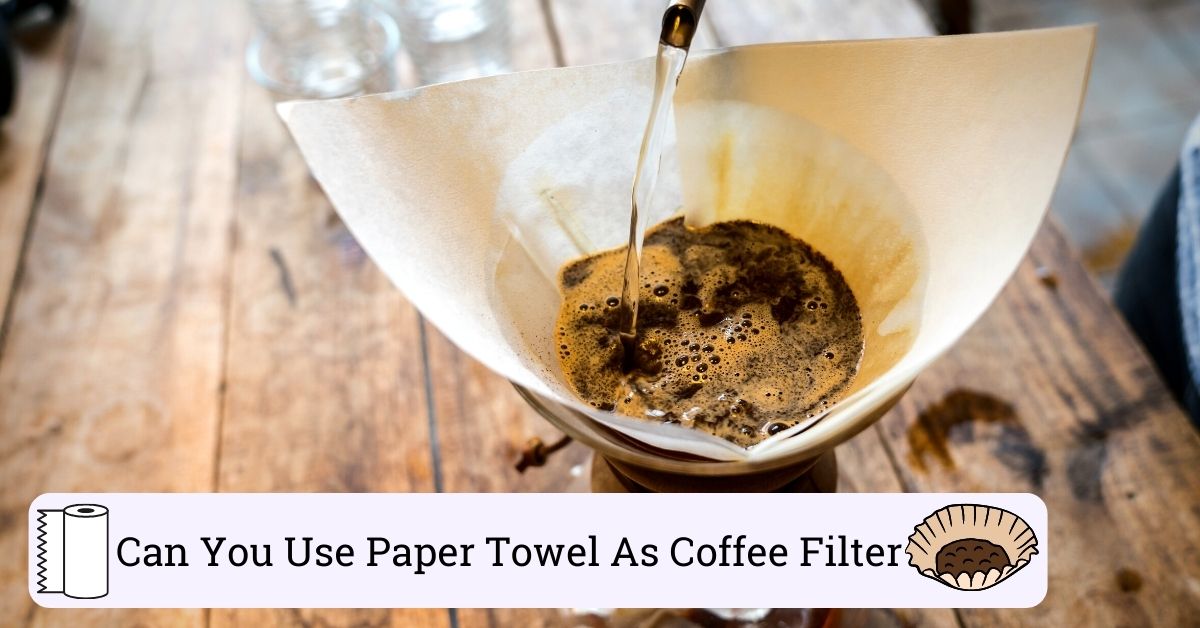 Mornings can be rough enough without opening up your box of coffee filters and finding nothing but emptiness staring back. Of course, this isn’t as tragic as being entirely out of coffee. Nonetheless, before you start stuffing coffee beans into your mouth like dry cereal, there are some alternatives to consider, including the humble paper towel.

A paper towel can be fashioned into a coffee filter. But it is not recommended as a regular substitute, as bleached paper products have residues that are best not ingested. Thankfully, paper towels are not your only alternative. You could even try making coffee with no filter at all.

Pod lovers and instant coffee enthusiasts have a good snicker when ground bean devotees run out of filters. Sure, sometimes there is backup, such as old hotel coffee packets that you scooped up along with the mini-bottles of all-in-one shampoo & conditioner and the mini- sewing kit. But it might seem safer chancing a dodgy filter than whatever is in those packets.

When you are out of filters but still want to use your beans, you have two choices: use a filter alternative or make coffee using a method that doesn’t need filters. The most popular filter alternative is, indeed, the paper towel.

1. Using A Paper Towel As A Coffee Filter

Paper towels make an effective coffee filter. It is easy, inexpensive, and the tight weave keeps the grounds out. You just take a paper towel or two, stick it inside the compartment where the filter goes, add your grounds, and go.

You need to ensure your makeshift paper towel filter isn’t sticking out of the compartment. If you leave some of it poking outside the compartment, you might end up with a leaky mess running down your machine and onto the counter (hasn’t your morning gone bad enough?).

The downside to using paper towels is that they might break, and you might be filtering undesired chemicals into your brew. Also, some people swear they can taste the paper towel in their coffee after it is done.

2. Using A Paper Napkin As A Coffee Filter

Using a paper napkin is even easier than a paper towel. This is thanks to their shape. They may be less likely to tear, depending on the brand, due to their layers. However, this is generally more expensive than the humble paper towel. Also, if they are dyed, you are leaching chemical dyes along with bleach residue into your brew.

3. Using A Cloth Handkerchief As A Coffee Filter

Handkerchiefs or a bandana are a nice size if you want to try cloth. However, stuffing an entire dish towel into the filter of your machine would be awkward, if not downright impossible. (Although for pour-over styles, they’re useable in their own bulky way). Nor is a handkerchief going to break like a paper towel might.

The downside to this method is ending up with a permanently coffee-dyed handkerchief, never mind the potential extra “flavor” that might be added to your brew.

4. Using Cheesecloth As A Coffee Filter

Cheesecloth is one of the best coffee filter alternatives, as it has a similar feel to a filter. Using it is easy; fold a square and set it in. You want it doubled because the weave has bigger holes than your average filter. It doesn’t have a weird aftertaste or has unsavory chemical dyes.

The only real disadvantage to this method is that cheesecloth has fallen out of fashion, so many households don’t own it.

5. Using A Mesh Sieve As A Coffee Filter

If you are using pour-over coffee, you can substitute a mesh sieve for a filter. The holes in the sieve’s mesh are slightly bigger than a paper filter, so if you are grinding your beans, go bigger and avoid a fine grind.

6. Using A Tea Bag As A Coffee Filter

Coffee is starting to be sold in tea bags, so this suggestion isn’t exactly radical. But if you don’t already have tea bag coffee, you can make your own. Some people have reusable tea bags to hand, and they can just fill these with their grounds and dunk.

Unfortunately, if you don’t have reusable tea bags, this method will require far more DIY skills. You will need to carefully open two tea bags, remove the tea, then add in grounds. You won’t be able to fill them the whole way, as you’re going to have to close them with string or bread ties. Then dunk your coffee into a hot mug of water.

The downside, of course, is that this is time-consuming, and you run the risk of stray bits of tea flavoring your brew.

7. Using A Sock As A Coffee Filter

You can use a clean sock as a coffee filter. That is if you don’t mind staining your sock. You want one that’s pretty thin with a fairly tight weave. Then you place your grounds into the sock and dunk it like you would a teabag.

You probably don’t want the chemicals used to dye your sock leaching into your brew on a regular basis, but it will do the job in a pinch.

If the idea of alternative coffee filters makes you blanch, consider keeping an alternative brew method in the cupboard for emergencies. These include:

You can also make cowboy coffee. Traditionally, there is an eggshell involved with this (or an entire egg, if you are Steinbeck), but you can leave that out. Once you do, it is essentially Turkish coffee, but made in a pot rather than the elegant cezve.

Essentially, bring a pot of water to boil. Next, remove from heat and add grounds (and eggshell, if you are hardcore). Wait for 5 minutes. Then slowly pour, being careful not to sluice the grounds into your mug.

Running out of coffee filters is a bummer. As we all know this will happen from time to time, it is a good idea to keep an alternative method in the cupboard, such as a French press. But when in a pinch, a paper towel or a clean sock can work. Just don’t use them regularly as the added chemical residues are not a health benefit.