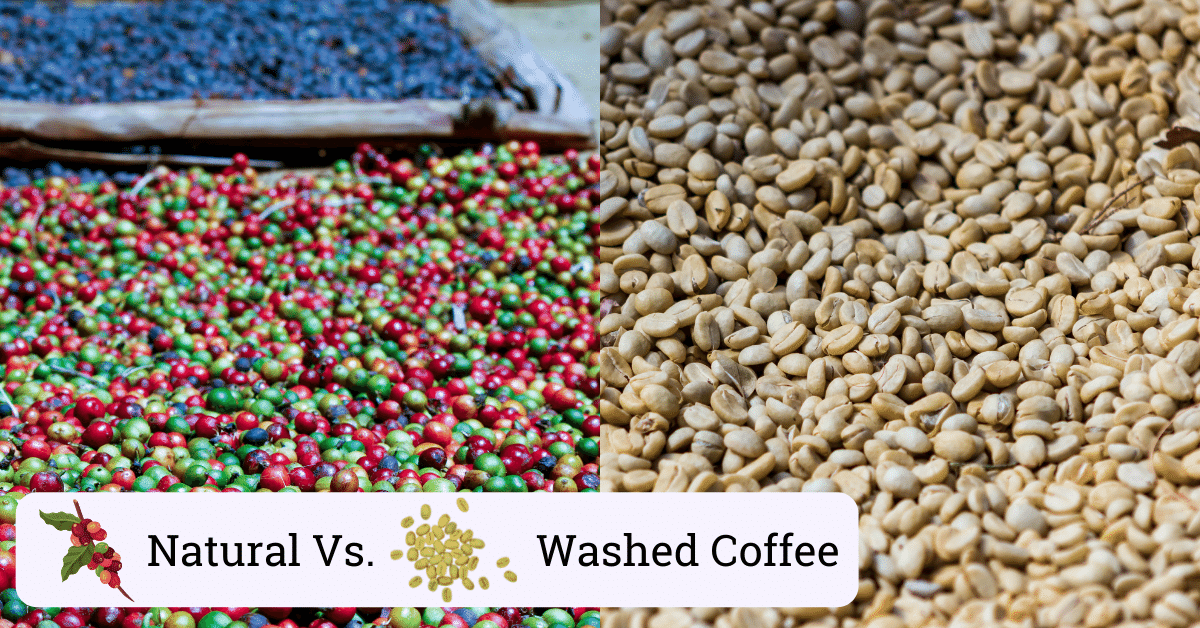 You might have heard of the terms “natural coffee” and “washed coffee” in the past, but you might not have known what exactly these terms meant. They both refer to processes that coffee beans must undergo before we can consume them, but is one better than the other?

Natural coffee and washed coffee differ due to the processing methods of the beans. Coffee beans processed through the natural method are left to dry naturally in the fruit, while washed coffee beans are removed from the fruit almost immediately before picking. This creates a difference in flavor.

Everybody has their preferences and their reasons for preferring one over the other when it comes to natural and washed coffees, but there are measurable differences in the taste of these two types of coffee which are determined by several factors.

Where Coffee Beans Start Out

The sacred coffee bean starts out as a cherry-like fruit that grows on a large tree or shrub. Inside this cherry is the bean, but this has to be turned into a usable, stable product that can be stored, transported to its desired destination, and then roasted to perfection.

There are many layers encasing the bean, including what is known as the silver skin, the parchment layer, the pectin, pulp, and outer skin. The skin and the flesh have to be removed in order to extract the beans.

In order for it to become this usable product, the bean has to have all the organic matter removed from around it, and it has to be dried to a maximum moisture level of 11%.

There are multiple ways in which this is achieved, but the two most common methods are that of natural drying and washing. These are also referred to as dry-processing and wet-processing, respectively.

Natural coffee, or unwashed coffee, refers to coffee that has been fermented naturally without being washed using water. This method occurs in regions with extremely limited water supplies, and it is in fact the oldest fermentation method for beans.

When coffee beans are fermented naturally, this means that the bean itself stays in contact with the surrounding fruit for a longer period of time when compared to the washing process.

Through this method, the beans are able to remain inside the cherry through the entire drying process, which is up to six weeks in some cases.

In order to process the cherries, they are laid out in the sun directly after they have been picked. They could be laid out on concrete, bricks, or even on tables, as long as they are able to dry out in the evenest manner possible.

In order to slow fermentation, the cherries are frequently rotated and raked through, also preventing them from becoming rotten in the sun. While this process is labor-intensive, it is extremely important to ensure that the cherries do not grow mold or begin to ferment.

If the drying has not been done carefully, the flavors of the over-ripe fruit may start to fuse into the roasted coffee which ends up in your cup.

When the cherries are completely dry, the skin and the fruit are removed to allow the coffee bean to be released. The cherries are milled in order to remove any remaining bits of fruit, ensuring you are left with only the bean.

Because the bean is in contact with the fruit for a longer period of time, the flavor of the coffee itself tends to adopt a sweeter, more fruity flavor. This also means that the flavor will have more depth which is highly desirable to some coffee drinkers.

The wet process for coffee is the most commonly used process across the globe. After picking, the cherries are washed thoroughly before being dried. They are sent through a de-pulping machine which removes the outermost skin from the fruit.

It’s important to note that the mucilage (the sticky layer covering the bean) remains attached to the bean and stays this way while the beans are fermented in water for up to two days. The sugars in the mucilage are released during the fermentation, adding to the flavor.

Next, the beans are washed a second time to remove the jelly-like layer, after which they are taken out to be thoroughly dried. This drying process happens either in the sun or through the use of mechanical equipment.

Finally, the beans are dried, stored, and milled to remove the parchment coating which usually protects the bean inside the fruit.

Washed coffees tend to have extremely clear flavors which are also predictable and consistent when compared to natural coffees. Because all the fruit was removed prior to fermentation, the flavors within the bean itself are able to fully develop without any external influences.

This means that washed coffees will have a stronger flavor of coffee, with hints of fruitiness but almost no fermented flavors or notes of berry. Washed coffees will be more light-bodied than natural coffees, and they will boast flavors with more complexity and acidity.

It is difficult to say which method produces a better tasting coffee because this is often up to personal preference. The biggest advantage to washed coffee is the fact that the flavor is kept consistent throughout, and each bean will have the same flavor as the next.

Washed coffee, however, is the less environmentally sensitive option, and this is due to the large amounts of water that are used in the process. It also requires large amounts of equipment to be able to produce a good and flavorful coffee bean.

Larger amounts of energy, as well as the increased need to bring in knowledgeable staff, further increase the overall cost of washed beans when compared to natural beans.

At the end of the day, it is your personal preference as to the type of coffee you would prefer to drink, and each type of process has its advantages and disadvantages.