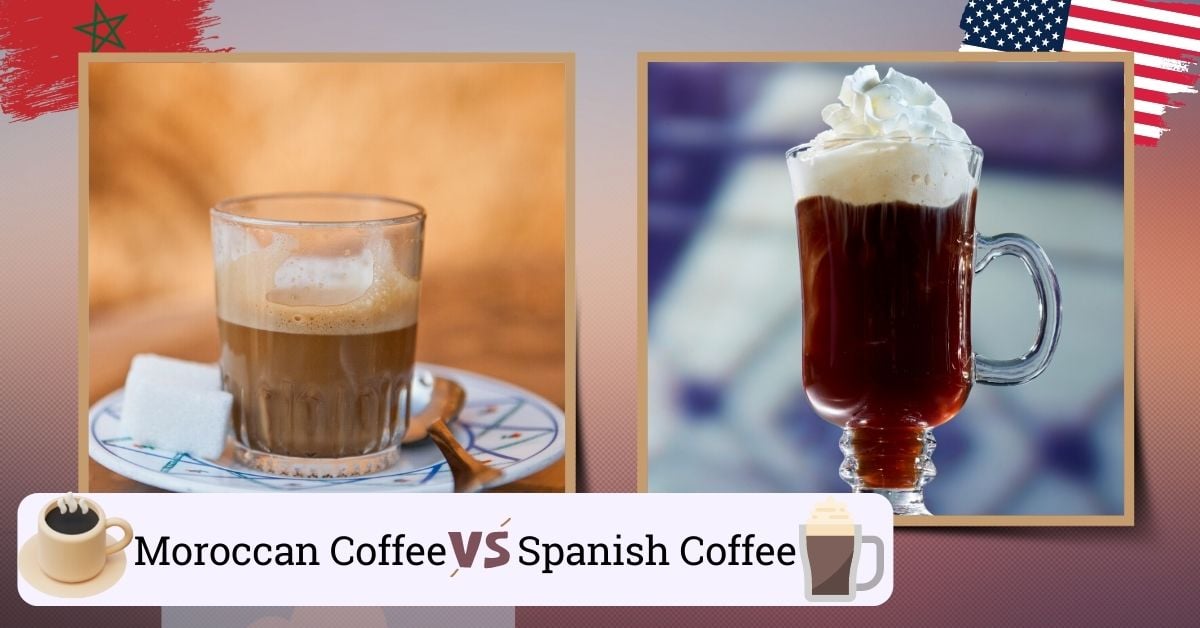 Whenever I think of Moroccan cafes, sweet, syrupy mint tea springs to mind. While mint tea is a well-known and much-loved beverage in Morocco, I recently found out that coffee is also very popular. Like Spanish coffee, Moroccan coffee is packed with flavor, but the two are different in so many ways, from their flavor profiles to how they are served.

Moroccan and Spanish coffee are both made with strong coffee and then given an added punch. Moroccan coffee is infused with a medley of spices like nutmeg, cinnamon, cardamom, and ginger. Spanish coffee features a caramelized sugar rim and is laced with rum, Kahlua, and orange liqueur.

Interestingly, while Moroccan coffee originates from Morocco and is commonly drunk there, Spanish coffee does not originate from Spain. There is so much more than meets the eye with these two beverages.

What Are The Main Differences Between Moroccan Coffee And Spanish Coffee?

Both Moroccan and Spanish coffee are loaded beverages. They have a coffee base, but added ingredients are what make them stand out. Furthermore, the manner in which they are served, and the way people drink them, make them different from your average mug of joe.

While Morocco is famously known for its Mint Tea, coffee is also a popular beverage. Moroccan coffee is fragrant, spicy, and full of flavor.

Traditional Moroccan coffee is made using freshly ground spices. Spices that are freshly ground have a more intense, lively flavor. Nowadays, you don’t have to exert too much effort by hand grinding spices to get a flavorful cup of coffee. Simply place whole spices into a coffee grinder or a spice grinder, and you’re good to go.

Dark roast coffee beans are used as it is a great base to play off all the different flavors of the spices. The spices also help tone down the bitterness of dark-roasted, strong coffee.

Since Moroccan coffee is enjoyed by groups of people who gather in coffee shops to connect with each other and socialize, it is brewed in larger batches and not as a single serving. It is common to get between four and six cups of coffee per batch.

The following spices are traditionally ground before being added to coffee for brewing, cloves, cardamom pods, ginger, nutmeg, black peppercorns, and cinnamon.

Coffee is served in small coffee cups or glasses, not mugs.

So much more than a boozy and decadent beverage, a Spanish Coffee is a showstopper of note!

When you order a Spanish Coffee, it is made right in front of your eyes, at your table. Rum is poured into a glass that is rimmed with sugar. The rum is then set alight in the glass. The glass is tilted so that the flame caramelizes the sugar. This takes some serious skill! Next, coffee, Kahlua, and orange liqueur are poured into the glass. And finally, to finish the spectacle, the glass is topped with light and frothy whipped cream and a sprinkling of nutmeg.

With its caramelized rim, which has a burnt sugar taste, bitter coffee and citrus accents, and creamy topping, Spanish Coffee is tantalizing on the tastebuds.

From the gritty caramelized sugar rim, velvety smooth boozy coffee, and light, fluffy cream, there is a whole landscape of different textures to be found in Spanish coffee.

Unlike in the States, people don’t drink coffee simply to get their caffeine fix in Morocco. Neither do they drink it on the go. Drinking coffee (or mint tea) is all about getting together, socializing, and really savoring the beverage.

Meeting for coffee is never a quick catch-up. Gathering in a café is about being fully present, sitting with friends and family, and talking. People spend hours drinking coffee, sharing ideas, expressing their thoughts, listening to the latest gossip, and connecting with others.

From Irish to Amaretto, caffeine beverages laced with liqueur are nothing new. Spanish Coffee was created in Portland, Oregon. It is called Spanish Coffee because it was inspired by a spiked coffee called Carajillo. Carajillo originates from Spain and is a popular beverage in Mexico, Cuba, and Colombia as well.

Tips For Making Moroccan And Spanish Coffee At Home

When making Spanish Coffee, ensure that the glass you use is tempered or heat resistant. It is also safer to use a kitchen torch (the sort you’d use to caramelize a Crème Brulee) rather than a lighter.

An orange liqueur like Triple Sec, Cointreau, or Grand Marnier combined with Kahlua or any other coffee liqueur and added to strong coffee will create a depth of flavor from bitter to citrus, which will be toned down by the whipped cream.

Although traditional Moroccan coffee contains many spices, it can be tweaked to your liking and the spices you have on hand.

Add ground spices to the coffee grounds and brew together in a French press.

Spanish Coffee and Moroccan Coffee are not your average caffeine-infused beverages.

Moroccan coffee showcases an array of fragrant, flavorful spices set against a backdrop of dark-roasted coffee. Each sip must be savored to appreciate the variety of flavors.

Spanish coffee is as much about the theatrical way the drink is created as it is about all the different tastes and textures contained in the glass.