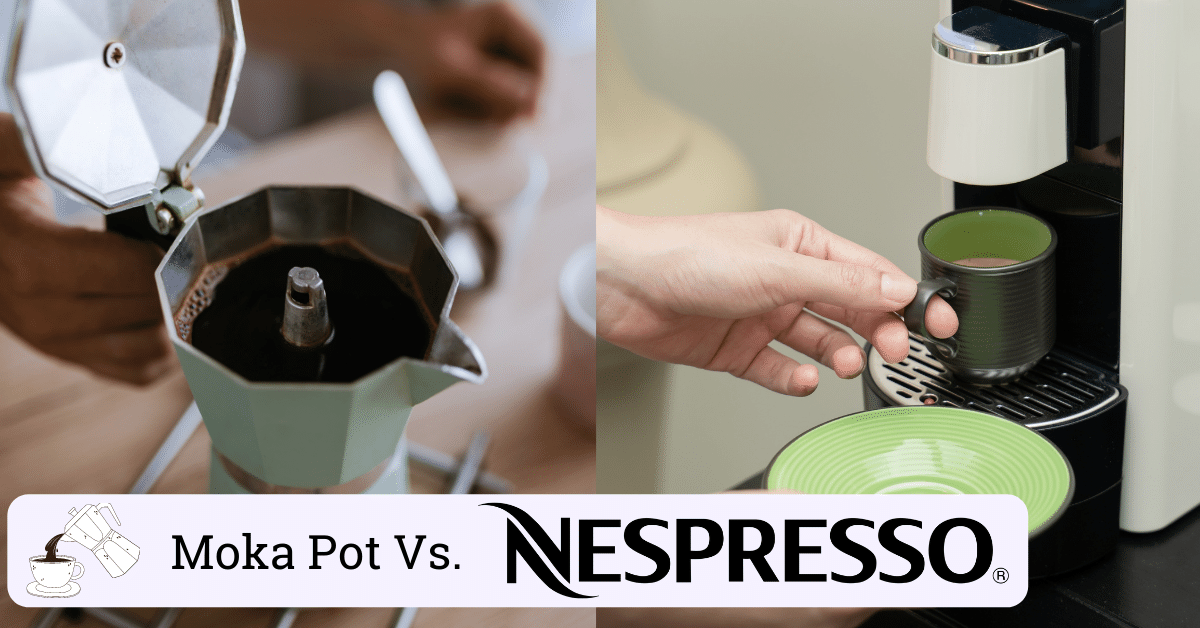 Moka is great for homebrew if you love strong coffee, camping, and even entertaining small groups at home. However, if you have mixed coffee lovers at home or you’re entertaining guests and need the coffee flowing, Nespresso is the way to go.

A Moka pot is a route to go if you’re searching for something speedy, convenient, and affordable.

However, if you want something more refined that doesn’t need the same level of attention as a stovetop coffee maker, Nespresso capsules are the way to go.

One of the essential decisions you’ll have to make if you want to prepare a good cup of thick espresso-like coffee is utilizing the Moka pot or Nespresso machine.

Both have pros and cons, which we’ll discuss in detail below, so keep scrolling to find which one best suits your mastery and time.

Coffee aficionados worldwide have been drinking superb Italian-style java from the comfort of home since the early twentieth century when Moka pots first appeared on store shelves. However, the commercial availability and griefing popularity of capsule machines has prompted long-time Moka pot users to investigate the advantage of getting a Nespresso machine.

I chose to put the two coffee-brewing systems to the test before expressing my thoughts on the Moka pot vs. Nespresso discussion.

A Quick Rundown Of The Nespresso Machine And The Moka Pot

Making coffee in a Moka pot vs. a Nespresso machine uses completely different techniques, resulting in similar but distinct espresso-style coffee brews. The Moka pot has a primitive appearance, whereas the Nespresso is a modern and streamlined machine.

Hot steam puts pressure in the lower chamber of a Moka pot, which pushes the moisture up into the middle section that holds the coffee grounds when cooked on a burner. As a result, you’ll have a robust and espresso-like brew.

You can also get espresso-like coffee with the Nespresso but less intense. Additionally, because of the capsule shape, which allows for more aeration due to the air retained inside every capsule when sealed, you’ll get a touch of crema on top.

A needle-like sprout perforates the capsule once it goes into the Nespresso machine and the compartment closes.

The openings in the capsule are then pumped with hot water under high pressure, causing the flat base of the capsule to burst. The brewed coffee then streams out of the burst capsule through a funnel nozzle into a coffee cup.

Many Nespresso coffees, known as “grand crus,” are available, ranging in intensity from medium to high. They originate from several parts of the globe, including Brazil and India.

Comparisons of the Moka Pot and Nespresso

Nespresso machines are more expensive than Moka pots. With a Moka pot, you have more freedom to experiment, but the Nespresso machine forces you to utilize its capsules.

Furthermore, boiling coffee with a Moka pot involves more effort than brewing coffee with a Nespresso machine, which is quite simple. Place a capsule in a machine and press a button to activate it.

Unlike a Nespresso, a stovetop Moka pot does not require power. We can make espresso-like drinks with both Moka and Nespresso coffee machines. Both machines produce excellent espresso, but the Moka is more powerful.

Every time you brew coffee, you must wash your Moka pot. It is not necessary to clean your Nespresso machine. You should, however, describe it once or twice per year.

What Makes A Moka Pot Better?

Most Moka pots are both inexpensive and long-lasting. I prefer my coffee prepared in a Moka pot because I am a coffee fanatic.

Nespresso machines have a cold, impersonal feel to them, which contrasts sharply with the ritual of preparing coffee in a Moka pot. You have significantly more control over the latter.

You can pick your beans and grind them yourself, for example. Furthermore, the flavor of coffee prepared with a Moka pot is one of my favorites. It’s more tasty and nuanced, in my opinion.

Moka pots are also very inexpensive and long-lasting. If you’re going on a trip, they’re easy to transport, and we can heat them over hot coals.

Brewing Time in the Moka Pot

Because a Moka pot brews coffee quickly, the water temperature must stay high. It’s best to look at the rapid brewing time as a benefit rather than a drawback. If you want to consume something faster than an espresso, a faster Moka pot brew is the way to go.

Why Should You Choose A Moka Pot?

The extremely inexpensive price of a Moka pot is one of the most prevalent reasons people pick it. Moka pots are far less expensive than Nespresso pills, costing between $20 and $30.

Finally, compared to Nespresso machines, Moka pots are considerably more environmentally friendly. They come with a metal filter, so no paper filters or pods are required.

What Makes Nespresso So Special?

The most significant advantage of owning a Nespresso machine, in my opinion, is convenience. You can get a good cup of coffee at the touch of a button.

Additionally, because coffee production happens via machines and no human assistance, the quality and flavor of your coffee brews will remain consistent.

Although the coffee produced by a Moka pot is of higher quality than that produced by the pour-over and drip methods, there is still an opportunity for error.

If you overpack the basket or brew at a higher temperature than suggested, you can get bitter coffee from a Moka pot. A Moka pot is a fantastic choice if you prefer your coffee to be robust and flavorful.

It takes longer than a minute for a Nespresso coffee maker to brew. It takes approximately 1-2 minutes to brew them and another minute to heat them once brewed.

Many people believe that because Nespresso coffee is brewed at optimum temperature and for a more extended period, it’s tastier than instant coffee, but this is not the case, as per the Nespresso site.

Should You Choose Nespresso?

With a Nespresso coffee capsule pack, you can prepare roughly 20 mugs of coffee. Although Nespresso machines are more expensive than the ordinary coffee maker, you can acquire one on Amazon for less than 150 dollars.

Do Moka Pots, on the Other Hand, Make Espresso?

Although both make a robust and full-bodied cup of coffee, authentic espresso is more potent and has more complex and tightly packed tastes.

While the coffee from a Moka pot usually is two to three times as concentrated as conventional drip coffee, genuine espresso is five to ten times stronger.

Although you can prepare espresso-based drinks like cappuccinos or lattes with espresso-style coffee from a Moka pot, actual espresso will provide more affluent and flavorful coffee drinks.

Espressos have more caffeine than coffee brewed in a Moka pot and Nespresso, in addition to having a richer taste and thicker mouthfeel. A Moka pot, on the other hand, produces a robust cup of coffee with a significant amount of punch when compared to other coffee makers.

The brewing time in a Moka pot is more significant than in a Nespresso machine. Additionally, it would help if you used a somewhat coarser grind in your stovetop device. You can experiment with different grinds to see what brews you get if you’re not sure if your grind is correct.

If your brew is too weak, it’s because you used a coarse grind, and the coffee doesn’t extract fully. If your coffee tastes bitter, it’s probably because the grind is too fine.

Just remember that the best technique to make a good cup of coffee is personal preference and ability. If you want to consume your coffee quickly, a Moka pot machine is a good choice.

However, if you want your coffee to taste as fresh as possible and have a little more money to spend, Nespresso capsules may be a better option for you. They also save time because the process is simple.