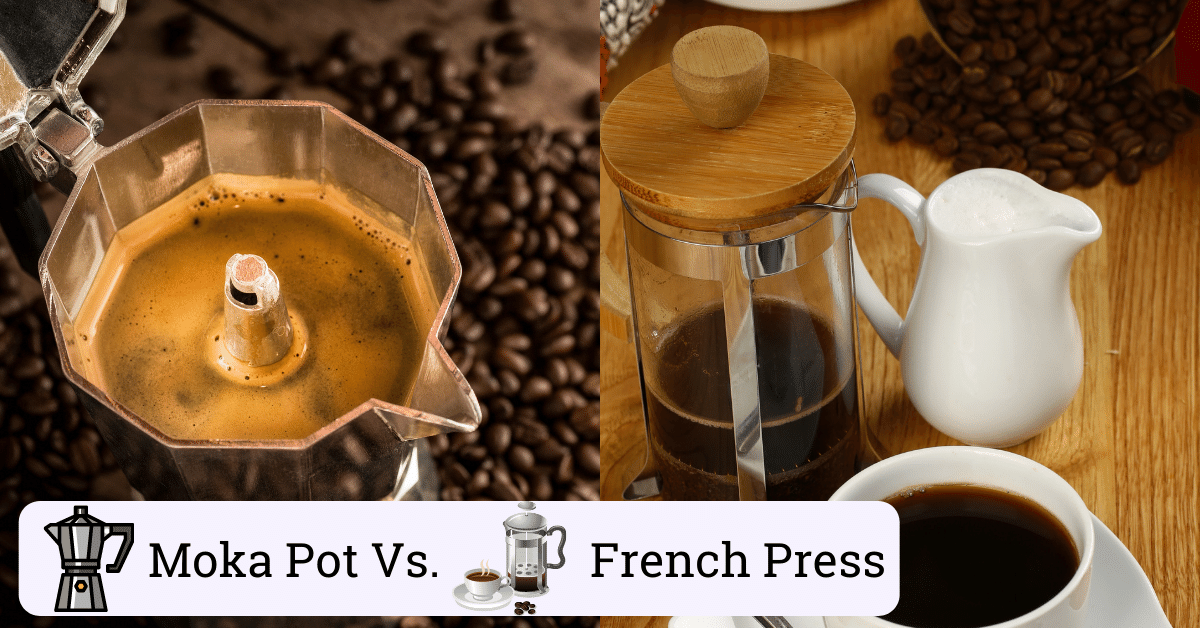 Coffee lovers the world over use a variety of items to make their favorite brew at home. With proper espresso machines costing hundreds, even thousands, of dollars, the humble Moka Pot and French Press have traditionally been used to whip up a hot cup of joy at a fraction of the cost. What is the difference between these two, and which is the best at making good coffee?

Where a Moka Pot uses steam and pressure to brew coffee, the French Press relies on steeping coarser grounds to release flavor and oils. The result is a sharp, strong brew from the Moka Pot and a rich, full-bodied taste from the French Press. It takes a bit more practice to use a Moka Pot.

As a frequent user of both methods, I’ve spent the day making copious cups of coffee to distinguish the differences between what each of these produces. Let’s discuss which one comes out on top.

Let’s have a look at where moka pot and french press differ:

Invented way back in the 30s in Italy, the Moka Pot has the pedigree to lend credibility to its ability to produce a high-quality brew. After all, Italy is the home of espresso! With its attractive, characterful design style and low buying price, the Moka Pot has remained a popular way of making coffee at home.

The Moka Pot works by forcing hot water from the bottom chamber up through the coffee grounds in the basket and dispensing it via a spout to the top compartment. Working in a similar way to pressure-driven coffee makers, the Moka Pot does the same thing on your stovetop, without any fuss.

What the Moka Pot does right in the showdown includes the following:

Using a different method entirely, the French Press relies on soaking grounds in hot water to extract all the flavors you want in your brew. The oils from the coffee bean are released through a process of steeping. The premise is to cover coarsely ground beans in hot water in the French Press, stir, and let it sit for four to five minutes.

Once the allotted time has passed, you press down on the plunger to separate the grounds from the brew before pouring. With various beautiful designs, the French Press has a particular flair of its own.

And The Winner Is…

Trying to decide on a winner here is very much dependent on the type of coffee you enjoy – if sharper, strong coffee is your vibe, you should opt for the Moka Pot. If you want a smoother, rounder taste with more depth in flavor, a French Press is your best bet.

As neither are remarkably different in price and ease of use, despite the Moka Pot needing a little more practice, we wouldn’t judge you for having both on hand and using them whenever you feel like one type of coffee over the other.