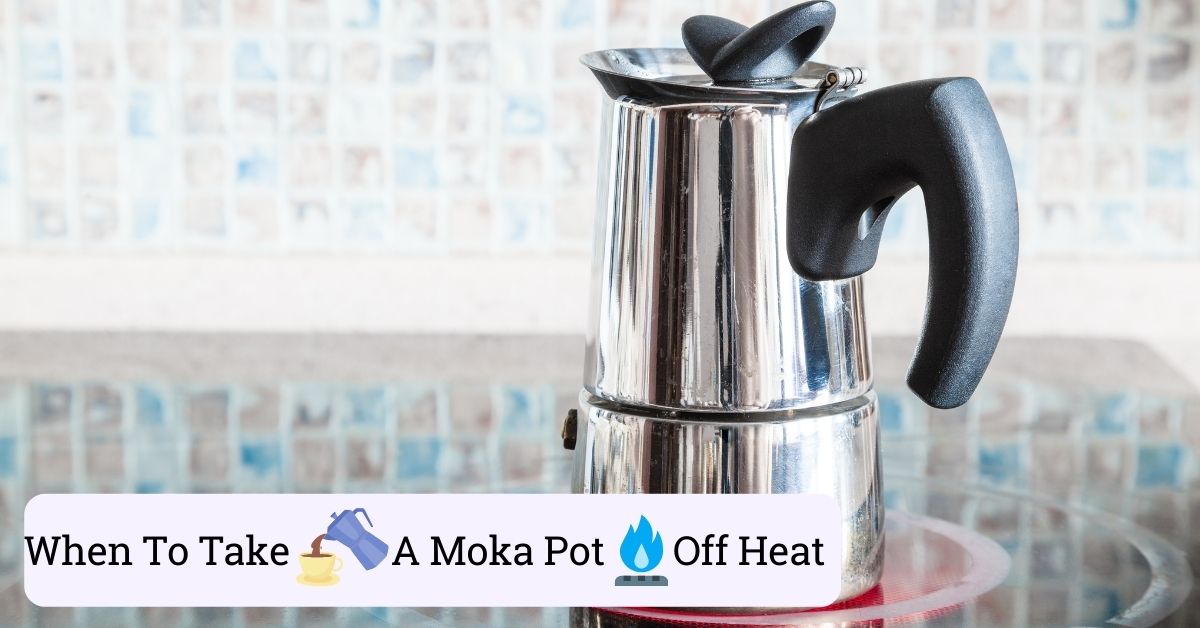 The Moka Pot is probably the most recognizable coffee brewer there has ever been. This brewer is notoriously difficult to use, and coffee enthusiasts everywhere find themselves frustrated when trying to brew a cup of coffee. One of the main frustrations with this brewer is heat, so when do you take the Moka Pot off the heat?

A Moka Pot must be taken off the heat as soon as the steam begins to bubble through the brew spout in the top chamber. For the best brew results, the temperature of a Moka Pot brew must be managed very closely and never allowed to get too hot, not get hot too quickly.

Brewing with a Moka Pot can be a frustrating challenge, but if you understand how to brew with this device, it can produce some of the most delicious coffee you have ever had. One of the keys to the brewing process is managing the heat of the brew well. Let’s explore the details of brewing with a Moka Pot to produce the best coffee possible.

When To Take A Moka Pot Off The Heat

The Moka Pot is a very widely used coffee brewer, but it is famously difficult to brew with. This brewer is challenging because it is not very repeatable, and some brews from the Moka Pot may be excellent while others are very lackluster.

One of the biggest issues when brewing with a Moka Pot is heat management. Too much heat in a Moka Pot brew will produce a very bitter-tasting cup of coffee, regardless of the rest of the technique that is used and the coffee that is used in the brew.

If too much heat is applied to the Moka Pot brew, it will become very bitter, and the brew will end too quickly, which results in under extraction and ever more bitterness. This leads us to an important question: when should you take a Moka Pot off the heat during a brew?

A Moka Pot should be removed from the heat entirely and cooled down with cold running water as soon as steam starts to bubble and splutter through the spout in the upper chamber.

However, the Moka Pot should be removed from the heat early and held above the stove, away from direct heat but still exposed to radiant heat if the brew is happening too quickly. This technique is vital for heat control during a Moka Pot brew and is known as ‘temperature surfing.’

Controlling the temperature of the brew in this way will produce the best tasting Moka Pot brew, regardless of the size of the Moka Pot and the coffee used for the brew.

Brewing with a Moka Pot is notoriously challenging, but with the right technique, it can be simple, enjoyable, repeatable, consistent, and reliable. Using the right technique results in a delicious cup of coffee from a Moka Pot, and the process is not as complicated as you may imagine.

Let’s take the time to go through the steps of the best Moka Pot brewing technique.

Step one in the process is to prepare the coffee. Coffee for a Moka Pot brew should be ground finer than coffee for a pour-over brew, but not as fine as a coffee ground for espresso.

Take the time to grind your coffee fresh to the correct size and consistency, and the rest of the process will be much easier.

Fill the Moka Pot basket with the ground coffee. Be sure that the basket is full, and do not tamp or compress the coffee in any way.

If you have a distribution tool used for espresso or something thin like a paper clip, use it to de-clump the coffee and distribute it evenly within the basket.

Tap the basket vertically when the ground coffee is evenly distributed within it to ensure that it all settles and does not move before brewing.

For the best results and the shortest brew time, it is best to fill the Moka Pot water chamber with boiling water. This will reduce the brew time and improve the success of the brew.

Fill the lower water chamber of the Moka Pot with boiling water until just below the safety pressure release valve. This provides a 10:1 water to the coffee ratio in almost every type of Moka Pot, regardless of brand or size.

Once the water is in the chamber, assemble the Moka Pot and get ready to brew.

4. Place The Moka Pot On The Heat

At this point, place the Moka Pot on a pre-heated electric stove on low heat or a gas stove on low flame. The heat of the stove should not be too high, or the brew will happen too quickly. An over-heating Moka Pot is a recipe for a terrible brew.

Using an adapter plate on a gas stove is best for this, but an open flame will work fine if you manage the heat well.

Once the Moka Pot is on the heat, it will begin to brew quickly, so the next steps in the process are vital.

5. Open The Lid And Pay Attention

When the Moka Pot is on the heat, open the lid of the brewer and keep careful attention on the brewer. Once the coffee begins to trickle out of the brew spout in the top chamber, watch the flow rate carefully.

If the flow rate increases, lift the Moka Pot up and away from the heat until it slows down. If the flow rate slows down too much or stalls, lower the brewer until it speeds up again. Try to maintain a constant, even flow rate and surf the temperature of the stove for the best possible brew.

6. Remove The Moka Pot And Cool It Down

If the brewer is allowed to continue heating up after the coffee is finished brewing, it will ruin the coffee.

At this point, the coffee is ready to drink, but it must not be allowed to heat up further. Pour the coffee from the Moka Pot into your mug or another vessel as quickly as possible after stopping the brew.

This coffee is strong and can be enjoyed straight if you enjoy strong coffee drinks such as espresso, or it can be watered down in the form of an Americano, or the coffee can be used for a latte or a cappuccino.

Brewing with a Moka Pot can be a challenge, but with the right method and techniques, the process will yield an excellent cup of coffee every time, and without much more effort than regular Moka Pot brewing techniques.

Take the time to brew your coffee with this technique, and your Moka Pot will never feel so daunting again. In fact, you will look forward to the next Moka Pot brew and may find yourself preferring the Moka Pot over any other brewer!