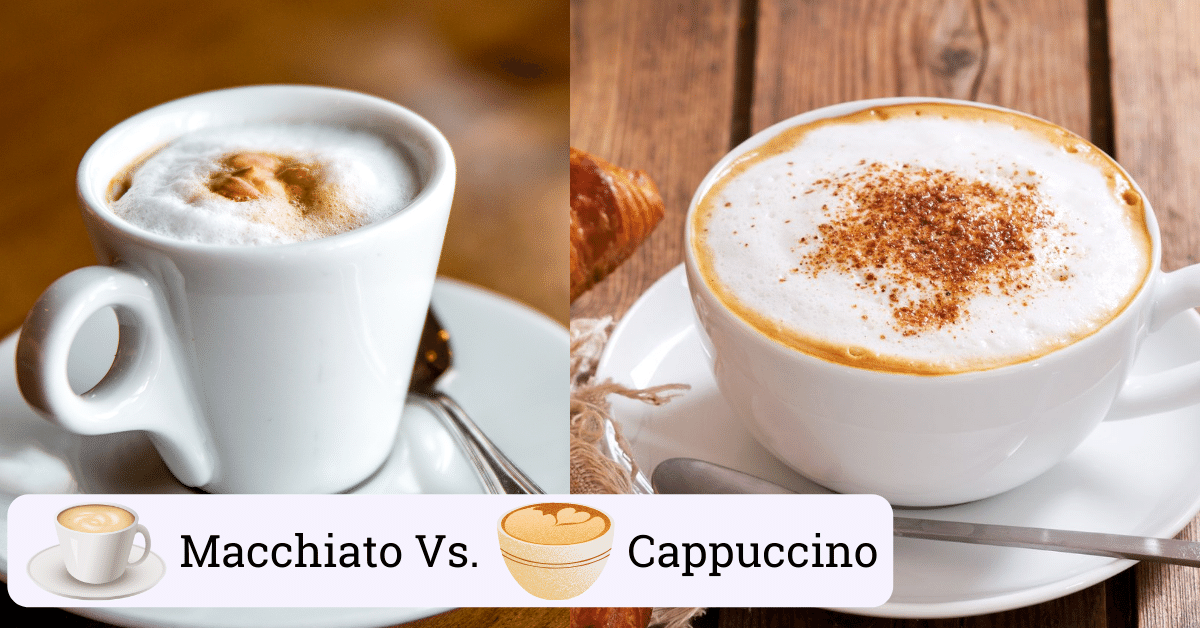 Ever had one of those coffee shop moments when you’re faced with the list of coffees, the barista is waiting for you to order, and the queue behind you is getting longer? You want something frothy, milky, and warming, but suddenly you don’t know the difference between a flat white, a café au lait, and a latte, let alone a macchiato or cappuccino. You know it’s on the tip of your tongue – what’s the difference between a macchiato and a cappuccino?

If you’re a new explorer in the amazing world of coffee or just want to improve your knowledge of the different variations your coffee machine can concoct, you’ll want to know how to combine espresso with milk to create a variety of beverages. Two of the most popular coffees you can purchase at your local coffee shop or create in your own kitchen are macchiato and cappuccino. Both are delicious and flavorful, but there are some important differences between them.

Macchiato Vs. Cappuccino: A Quick Comparison

What Is A Macchiato? A Quick Guide

A macchiato, caffe macchiato, or espresso macchiato is an espresso coffee with a splash of steamed milk, or milk foam added. In Italian, “macchiato” means marked, spotted, or stained – so the espresso is simply marked by the milk, not diluted. The Portuguese version, café pingado, is translated as coffee with a drop (of milk).

Traditionally served in a small espresso glass or cup, the macchiato is a quick pick-me-up beverage, usually enjoyed mid-afternoon. The milk offsets the bitterness of an ordinary espresso, which makes the macchiato a popular drink for those who like a strong coffee with a hint of sweetness.

A History Of The Macchiato

The macchiato’s history begins with in Italy in the late nineteenth century, with the invention of the espresso machine, which produced a powerful shot of pure coffee bliss. The macchiato was developed as an alternative to the bitter espresso for those who crave the punchy boldness of espresso, but like it tempered or moderated with a touch of milk.

How To Make A Macchiato

Baristas make a macchiato in the following way:

The tiniest hint of foam will be on the coffee, combining with the crema to sweeten the espresso.

It is quite common for macchiato to be made with a double espresso for an extra caffeine hit.

Variations Of The Macchiato

Although the traditional espresso macchiato is still popular – and what you’ll get if you order a macchiato – there are some variations of this iconic coffee.

Starbucks have created various twists on the latte macchiato, adding vanilla or caramel syrup or even chocolate to create an entirely new beverage, not recognizable as a caffe macchiato at all (although really voluptuous and velvety, with a caffeine hit).

What Is A Cappuccino? A Quick Guide

A cappuccino is usually served in a tall glass, showing the layers of coffee and milk or a large cup. In Italy, cappuccino is regarded as a breakfast drink because of the lightness of the milk and is often topped with shaved chocolate or cinnamon.

The layer of milk foam on cappuccinos has given birth to a new art form, where baristas vie to produce the most elaborate milk foam creations to top coffee beverages.

A History Of The Cappuccino

Coffee in the 1700s wasn’t the smooth, flavorsome beverage of today – made with lower grade, cheaper beans, it was far more bitter and grainy, so the additions made it sweet and warming. The addition of cream also led to the name of the coffee, which refers to the Roman Catholic Capuchin monks, whose robes are the light brown of milky coffee. Another version of the name’s origins comes from the circle of white cream against the brown coffee, which resembles a monk’s tonsure or shaved head, also sported by the Capuchins.

As coffee bean production improved and once the espresso machine was invented in Italy, it was no longer necessary to hide the flavor of coffee with rich cream, and the modern milk-based cappuccino was born. The Italian version of the coffee first appeared in the 1930s, but during the Second World War (1939-1945), the cream version became popular again, as the quality of coffee declined. By the 1950s, the modern cappuccino’s popularity had grown, and a world favorite was established.

The cappuccino only became widely popular in the States in the 1980s, and has become the middle ground for those who find espresso too strong and a latte too milky. However, the American cappuccino is often made with a double shot of espresso and a greater proportion of milk than the traditional Italian version.

How To Make A Cappuccino

To make a barista-worthy cappuccino, do the following:

Variations Of The Cappuccino

The biggest variation in cappuccinos is how the milk foam is prepared, either wet or dry.

Just as macchiatos can be altered with the addition of vanilla or caramel syrup, so the humble cappuccino has come in for the peppermint, raspberry, and even cinnamon treatment.

The original Austrian cappuccino is still popular and is sometimes called a cappuccino with cream. These cappuccinos are usually made with steamed milk, but the milk foam is replaced with cream.

The primary difference between a macchiato and a cappuccino is the ratio of coffee to milk. A macchiato is 90% coffee, with 10% milk, while a cappuccino is only 25% coffee and 75% milk. If you prefer a stronger flavor coffee or normally have an espresso, try a macchiato. If you’re a milky coffee fan, then a cappuccino is a good choice for something with more kick than a latte.