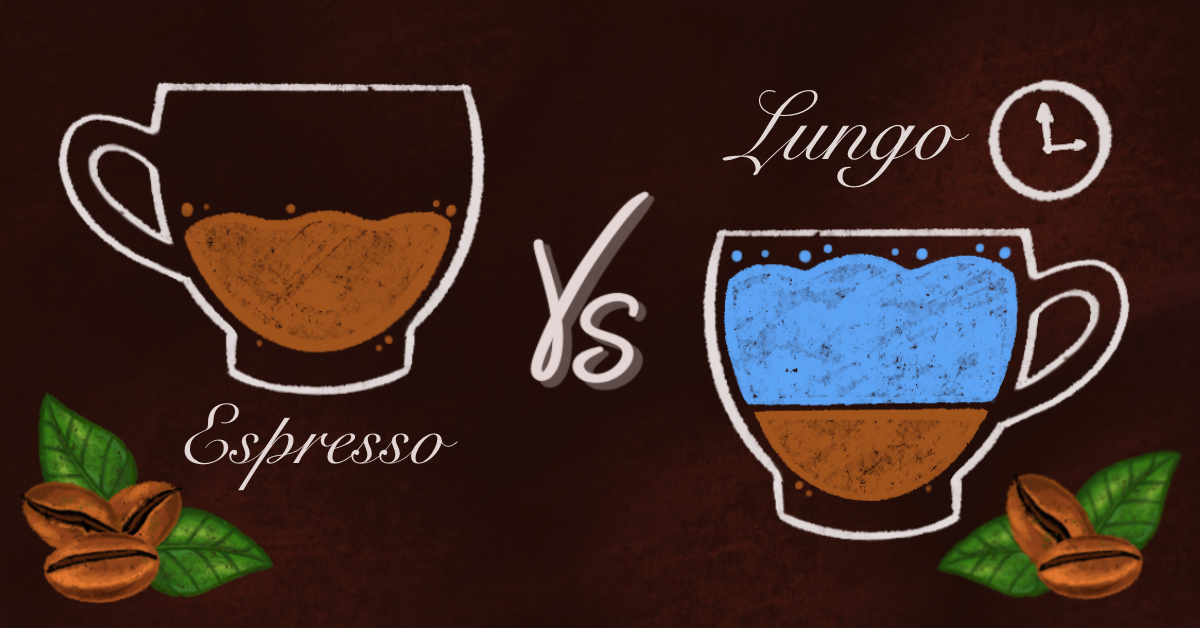 In the world of coffee, there are few subjects that hold as much contention as espresso. Espresso must be brewed within a very precise recipe with a precise method, but modern espresso seems to vary widely from one place to another, and some places even sell various types of espresso, such as the Lungo. What is the Lungo, and how does it compare to regular espresso?

Lungo is the Italian word for ‘long.’ The Lungo is a long espresso, typically brewed for a longer time than typical espresso and made with coarser coffee grinds. The Lungo is larger than the Espresso and is usually less intense. The Lungo can be ruined very easily by over-extraction.

The Lungo is a more modern style of espresso and strays quote drastically away from traditional espresso brewing methods and recipes. However, it can be a delicious drink if it is prepared well and is an interesting type of espresso shot. Let’s look closer at the Lungo to better understand the drink and to compare it to what we know regular Espresso to be.

What Is The Lungo?

Modern espresso coffee drinks can be divided into three separate styles of espresso: Ristretto, Espresso, and Lungo. All three of these drinks are espresso drinks, but the brew methods and recipes of each are very different.

The Lungo is the largest and least intense version of the drink and is typically brewed with a ratio of 1:3 or higher. This brew ratio means that the Lungo is the largest of the three styles of espresso and is usually the most difficult to brew, as the larger volume of water pushed through the coffee grinds risks significant over-extraction.

The word ‘lungo’ is the Italian word for ‘long’ and is given to the drink because of its larger size compared to traditional Espresso. The Lungo may be up to three times the volume of regular espresso and so must be prepared with a different method to get the most out of the coffee.

Let’s look a little closer at the best way to brew a Lungo and what the experience of drinking the Lungo is like.

The best way to brew a Lungo is not to just pull a longer espresso shot, as many believe, but rather it is to target a specific brew ratio.

Typical Espresso is brewed at a ratio of 1:2, and Lungo should be brewed with a typical ratio of between 1:3 and 1:6.

The best ratio to aim for regarding flavor is 1:4, which will provide a shot of espresso double the size of regular Espresso. This ratio means that for every gram of ground coffee beans you put into the portafilter, there should be 4 grams of liquid coffee output.

For example, if you brew Espresso with 18 grams of coffee, you should aim to have an output of 72 grams of liquid.

This ratio is simple enough to brew with, but the real key to pulling a good Lungo is to add ten seconds to your typical brew time for Espresso. This is a trick that not many baristas use to pull the best Lungo shots.

If you typically brew 30-second Espresso shots, brew your Lungo shots for 40 seconds, targeting the 1:4 ratio. To achieve this, you will likely have to grind your coffee beans slightly coarser than for regular Espresso, as to not ever extract the coffee.

An example then of a good Lungo is to brew 18 grams of coffee into 72 grams of liquid in 40 seconds with a grind size slightly coarser than traditional espresso.

If you manage to pull the Lungo shot correctly, which can be a challenge if you are used to pulling Espresso or Ristretto shots, then the coffee will be delicious.

The Lungo is a milder drink compared to the other styles of espresso and is larger and slightly less textured as well.

A common misconception of the Lungo is that it is a very bitter drink. This is usually due to over-extraction. If your Lungo tastes too bitter, try grinding your coffee coarser and brewing with the same ratio and brew time.

A well-made Lungo should be sweet, light, with a lot of clarity and lower acidity. Lungo is best made with lightly roasted coffee beans from locations that produce more floral flavor notes, such as Ethiopia.

The drinking experience of a Lungo should be gentle, enjoyable, sweet, smooth, and easy-going, as the drink is far less intense than other forms of espresso.

Comparing the Espresso and the Lungo must begin with the brewing method. The Espresso is brewed with less water, typically a 1:2 ratio, and with a much finer grind size than the Lungo.

The Lungo must be brewed with a coarser ground coffee for a little more time and with more water. This produces a larger, less intense drink than Espresso.

The Espresso tastes more intense and is much more textured than the Lungo, and also features more body and more clarity in terms of the flavor profile. The Espresso is a very balanced drink and highlights every flavor that the coffee has to offer.

At the end of it, Espresso is for those who enjoy a stronger coffee, and the Lungo is for coffee drinkers who enjoy the flavors of espresso but would rather have them be slightly less intense.

The Lungo is a modern style of espresso that is typically twice as large as regular Espresso and twice as mellow as a result.

This drink is ideal for the coffee lover who wants bold, clear, identifiable flavors in their coffee but would rather have the overall flavor of the drink be less intense than traditional Espresso.

The Lungo is also a longer-lasting drink, which makes it perfect for those who prefer drinking their coffee more slowly.

In short, the Lungo is a long espresso with a less mellow flavor, but with all of the enjoyable attributes of regular Espresso.