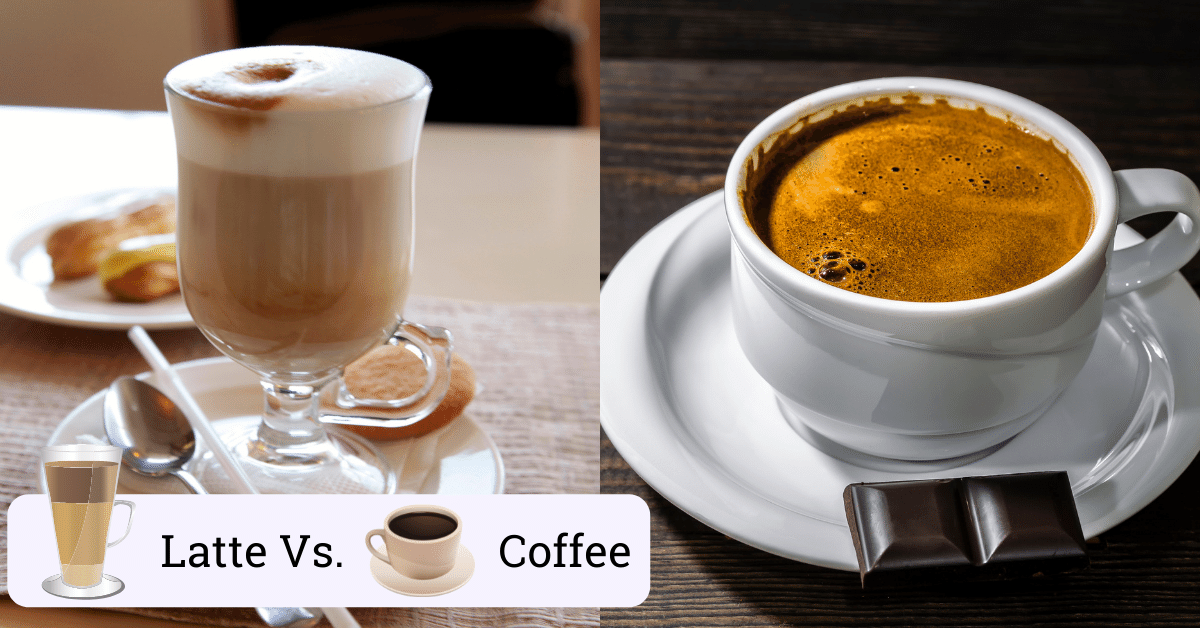 If you’re trying to differentiate between a latte and coffee, then you’ve come to the right place. Understandably, the difference between lattes and coffee may be confusing to you, seeing as a latte is a kind of coffee. However, when “coffee” is used in the ordinary sense, it generally refers to instant coffee or filtered coffee made using ground coffee beans.

Lattes are a type of coffee made using espresso and steamed milk, topped with a thin layer of foam. On the other hand, coffee is made using instant coffee or filtered coffee, water, and in some instances, milk.  Both beverages can be served using milk alternatives like soy, or almond milk.

Let’s explore the differences between lattes and coffee to find out which caffeinated beverage is best for you.

Here are the differences between a latte and a coffee. These differences will help you understand which beverage might be best suited for your taste buds.

Lattes And Coffee Are Prepared In A Different Manner

Normal coffee is prepared with the base being instant coffee or ground coffee. Generally, hot water will be poured over the coffee to give you a dark liquid. This liquid is referred to as black coffee.

By adding milk to the black coffee, you now have what is generally referred to as coffee. When it comes to adding milk to your coffee, it is not necessary to add milk, but it will help if you find the taste of black coffee to be too strong for your liking.

When using milk in your coffee, you are not strictly limited to using ordinary cow’s milk ranging from whole milk to low fat, or fat-free milk. You can use milk alternatives like almond milk, macadamia milk, oat milk, or soy milk. However, these milk alternatives do tend to be a bit more expensive than regular cow’s milk.

The word “latte,” when translated from Italian, means “coffee and milk.” In contrast to ordinary coffee, lattes are created with an espresso base, followed by steamed milk, and then topped with a layer of foam. A latte is generally made using 1/3 espresso and 2/3 steamed milk, providing a rich and creamy caffeinated beverage with a luxury finish.

The Milk Content In Lattes Are Generally Higher Than In Coffee

The average latte is made using 1/3 espresso and 2/3 steamed milk. Conversely, coffee is more water-based, with the general ratio being 1/5 coffee, 3/5 water, and 1/5 milk.

When it comes to lattes, milk is an absolute requirement due to its foundation being espresso. Conversely, coffee does not necessarily require milk as it can be served as black coffee, consisting of coffee and water alone.

Lattes Are Generally Smaller Than Coffee

Given that lattes are a thick, creamy drink made solely out of espresso and milk, they tend to be served in small servings, generally in long, clear glasses to highlight the contrasting layered look that lattes boast.

On the other hand, since coffee is made using ground or instant coffee with water, and perhaps a dash of milk, there’s no limit to the size it is served in. Generally, coffee is served in larger cups.

While some suspect that this is so that people take longer to consume their drink and spend more time in the restaurant, another potential reason is simply that coffee is cheaper to produce; therefore, what it lacks in quality, it makes up in quantity.

Lattes are often more expensive than instant or filtered coffee for two reasons in particular.

For one, lattes contain espresso and steamed milk, and its ingredients tend to cost more than the ingredients of ordinary coffee made from coffee and water, with a dash of milk.

Secondly, the effort that goes into crafting a latte into a luxurious, aesthetically pleasing, caffeinated beverage is a bit more extensive than pouring water and a dash of milk over instant coffee.

Based on these two factors, it is understandable why coffee shops require higher compensation for lattes in comparison to coffee.

The average latte generally contains less caffeine in comparison to a cup of regular coffee. This is, however, dependent on the number of espresso shots in your latte. Generally, each shot of espresso will add approximately 75 milligrams of caffeine to your latte.

The amount of caffeine contained in your regular coffee will depend on the type of roast you are using. Therefore, it may be best to avoid dark roasts and go with a lighter roast if you are looking for a good caffeine boost.

Although the typical latte is made of pure espresso and steamed milk, this has not limited coffee shops from providing a variety of lattes by adding various flavorings such as hazelnut, caramel, vanilla, and chocolate syrups. These creative flavorings are ideal for anyone with a sweet tooth, or simply someone looking for a dessert-type beverage.

Similarly, coffee manufacturers have begun providing various flavors of coffee ranging from hazelnut, chocolate, vanilla, caramel, and even mint. However, most brands have struggled to find the balance between the taste of coffee and their added flavoring, generally creating coffee that still predominantly tastes like ordinary coffee, with undertones of the relevant flavor.

If you’re someone who would enjoy the taste of ordinary coffee with a twist, then flavored coffee is definitely something you might enjoy. However, if you’re looking for something to soothe your sweet tooth, you might have to add quite a bit of sugar and milk to turn your coffee into a dessert-like beverage.

Lattes Allow For Froth Art, Whereas Coffee Does Not

Thanks to the frothy milk found on top of lattes, baristas have started to become creative, using the froth to style lattes with flowers, animals, hearts, and even words.

Unfortunately, due to the absence of a frothy milk top, froth art is not possible for ordinary coffee.