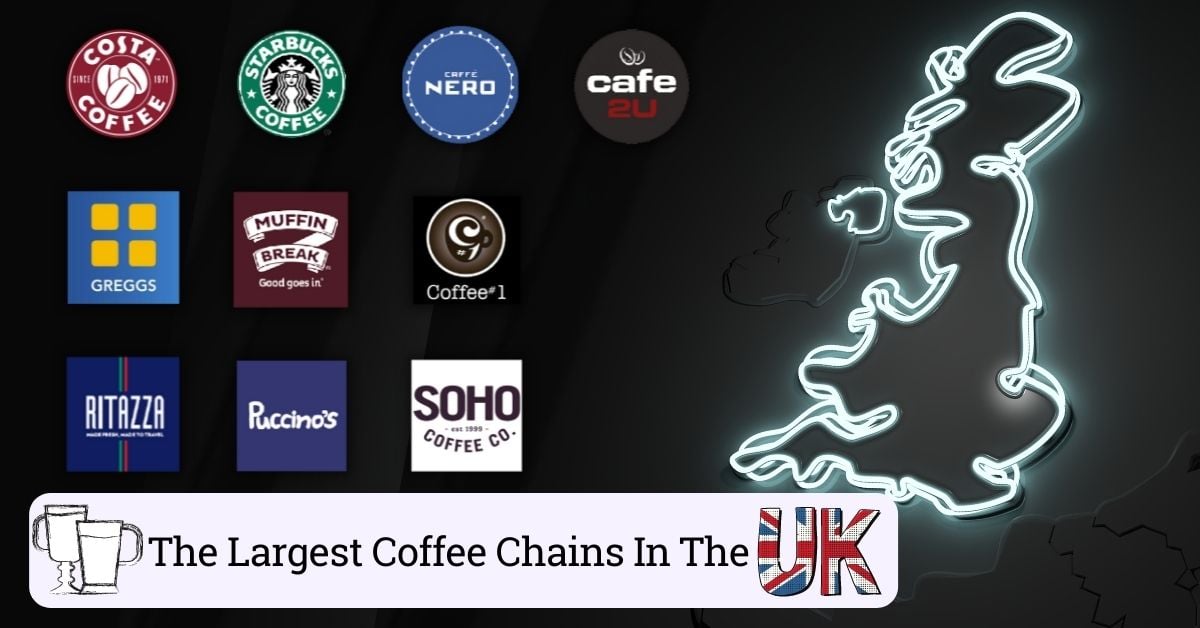 The UK consumes 70 million cups of coffee per day!  I find this quite interesting considering that the British love their tea and have made “tea-time” famous worldwide.  The flurry of coffee shops established in the UK is the reason for the popularity of this beverage.

Here is a list of the 10 largest coffee chains in the UK.

The highest among the leading coffee shops in the UK is Costa Coffee, with 2,691 coffee outlets.  The rise of this coffee chain began in 1971 with the Italian brothers Sergio and Bruno when they opened a small roastery.

They blind-tested 112 variations before finding a good coffee for their signature blend, “Mocha Italia,” which is still their specialist blend.  This blend is a combination of delicate Arabica and strong Robusta beans that is slow-roasted for a maximum of 18 minutes.  The result is a coffee with a hearty flavor, rich aroma, and smooth taste.

Before opening their coffee shops, Costa sold their coffee beans to prestigious hotels in London, like the Ritz.  In 1981 they opened the first Costa Coffee Shop and were the first to serve espresso and cappuccino in porcelain cups.   Over time they expanded their business and opened more shops across prestigious locations in London.

In 1988, Sergio bought his brother’s share and continued with Costa Coffee until 1995, when the coffee chain was sold to Whitbread, a multinational coffee shop, and restaurant chain.  In 2009, Costa opened its 1000th store and purchased Coffee Heaven adding more stores to its fleet.  In 2018, Coca-Cola bought Costa from Whitbread, and this coffee chain continues to excel in the UK.

Greggs, a dominant “food-on-the-go” chain of stores, relies on its House Brand coffee to maintain this dominant position.  Greggs has 2,078 stores and is the 2nd largest coffee chain in the UK.

Greggs did not start as a coffee-based store but was founded in 1938 by John Gregg, who opened a bakery shop in 1951 in Gosforth, Newcastle upon Tyne.  After his passing, the company was taken over by his son Ian, assisted by his brother Colin.

In 1998, Greggs enlisted the help of Ueshima Coffee Company (UCC), a Japanese manufacturer for coffee, to create the Greggs House Blend coffee.  This coffee was also successfully implemented into the food-to-go market.  Greggs House Blend is made with Arabica and Robusta beans from Tanzania, Peru, and Colombia.

Over the next few years, the brothers started expanding the business by opening up new stores and acquiring other bakeries, which they incorporated into Greggs.  In 2013 Greggs focused on the concept of “food-to-go,” opening their stores earlier and closing later to accommodate people going to and coming from work.

In 2017 Greggs opened their first “drive-thru” in Salford serving customers 24 hours a day. With its strategy to build its coffee credentials, Greggs food-on-the-go has allowed this chain to continue on its path of success.

Starbucks Coffee is a famous American-based company and is the 3rd biggest coffee chain in the UK and owns 1,025 stores.  They opened their first UK store in 1998 in Kings Road in Chelsea, selling drip-brewed coffee and espresso-based hot drinks.

In April 2003, Starbucks acquired Seattle Best Coffee and Torrefazione Italian, increasing their store count by another 150 stores.  During the next few years, they took over some Diedrich Coffee and Diedrich Coffee Equipment Company stores.  Inspired by Diedrich’s “fresh-pressed” coffee system, Starbucks tested this coffee in several of its locations.

The layout of Starbucks stores is designed to be cozy and intimate but still provide the customer enough personal space.  The décor in their coffee shops is a combination of sofas, armchairs, coffee tables, and chairs, so there is space for the young and older clientele.  Starbucks continues to source the highest quality Arabica coffee for their outlets.

Caffé Nero is the 4th largest coffee chain in the UK and has 648 outlets.  They first opened in 1990 in the South Kensington section of London.  Inspiration came from a small espresso bar in Malan where people were accustomed to drinking their coffee while standing.

This first shop in London offered no seating for its patrons and was not a big hit for the locals but rather for the London Italian community who enjoyed drinking the traditional coffee.  But, despite the less enthusiastic British people, Café Nero thrived as more Italian-style espresso shops became more commonplace in London.

Founder, Gerry Ford, wanted to create traditional Italian cafés that would serve high-quality coffee and be a place to serve the neighborhood meeting spots.  In 1997 a capital group invested in and purchased the 5 Café Nero shops, and the Caffé Nero Group PLC was formed.

The new team revamped the design of these units but kept the name, the coffee, and the espresso shops and began building a chain of Café Nero stores.  The brand chooses the décor for their shops to reflect the neighborhood where the shop is located.

Stools and tiled floors are for the commercial sections where the coffee stops are short, and for the residential areas where longer coffee stops are the norm, sofas and armchairs replace the stools.

In 2007, Caffé Nero was bought by Rome Bidco Ltd, and they built their Roastery in 2009 to create the award-winning coffee blend.  The company continued to expand, and in March 2012, Café Nero acquired 29 Aroma Limited stores to add to their chain.

In 2013 their coffee was rated best tasting among 5 major UK brands.  They continue to serve Classico Blend, a medium Italian roast, which is sweet and balanced with notes of dark chocolate, hazelnuts, and caramel in all their outlets.

Café 2U is a leading mobile coffee system delivering fresh espresso coffee to its customers and has a network of 85 franchises across the UK.  Franchises are offered exclusive Café 2U territories, intensive training, and a well-equipped van to travel around to the different business locations.

Café 2U was founded in 2004 by Tom Alcan, who first experienced the mobile coffee trend in Australia.  The business model is based on working weekdays and increasing sales through events, functions, and home deliveries.  Their exclusive coffee blend is roasted to a unique recipe that uses the finest coffee beans.

Coffee #1 is a British coffee house that originated in Cardiff, Wales, in 2001, and by the end of that year, the company had 3 shops.  It was founded by a group of four investors, one of whom was James Shapland, who became the company’s managing director in 2002.

Under his guidance, Coffee #1 emerged as a market leader in South Wales and SW England, winning many prestigious awards, including the best chain of the year award for 5 years running.

In 2011 Coffee #1 was bought by the Cardiff brewery company SA Brain and in 2013, they added another nine outlets to their portfolio.  In 2015 the company opened its 50th outlet and grew to 92 outlets when Café New bought a 70% stake in their business.

Muffin Break originated in Canada in the 1970s and was later sold to the Australian Foodco Group, which opened a shop in the UK in 2001.  Since then, Foodco has grown to include 60 locally-owned cafés.

In 2015 Foodco formed a partnership with Croc’s Play centers, an Australian family entertainment franchise.  Croc’s converted all their cafés to Muffin Break Cafés.  In 2020 Muffin Break was awarded the prestigious Roy Morgan Coffee Shop of the year award for the best customer service.

Caffé Ritazza is a chain of coffee shops owned by the British multinational SSP (Select Service Partner) group.  SSP is a dedicated foodservice contractor and operator of food and beverage brands.  Caffé Ritazza first opened in 1995 and was created exclusively for the travel market.  There are 50 franchised Caffé Ritazza outlets in the UK, located at airports and train stations.

Founded in 1995, the first Puccino’s store opened at the Putney Railway station.  Puccino’s is part of the Massimo Zanetti Beverage Group, and their network of coffee shops is targeted at high footfall travel locations such as commuter train stations.  The company is continually growing with opportunities for new franchisees to open across multiple locations in the UK.

Puccino’s brand designer has managed to create light-hearted banter and quotes, which is a signature feature in the décor of their outlets and printed on their merchandise.

The coffee served at Puccino’s is hand-roasted Brazilica Arabica beans sourced from the certified Fairtrade plantations in Columbia for their nutty, chocolatey flavor and floral aroma.  Beans are also sourced from Costa Rica, Guatemala, and Indonesia.

Soho Coffee’s values of Simple, Original, Honest, and Organic are what this coffee company continually strives for.  The first Soho Coffee shop was launched by Julian Dunkerton in Cheltenham in 1999 and was the first artisan coffee chain in the UK.  Since then, Soho Coffee has expanded their brand and have a chain of 40 coffee shops.  Twenty-five stores are directly owned, and the others are franchised.

Soho Coffee combines a skilled team of baristas with a first-class coffee company. The company trades strongly in shopping malls, leisure and travel outlets and recently added healthcare to its portfolio.  Soho Coffee serves organic coffee sourced from Fairtrade farmers in all their outlets.