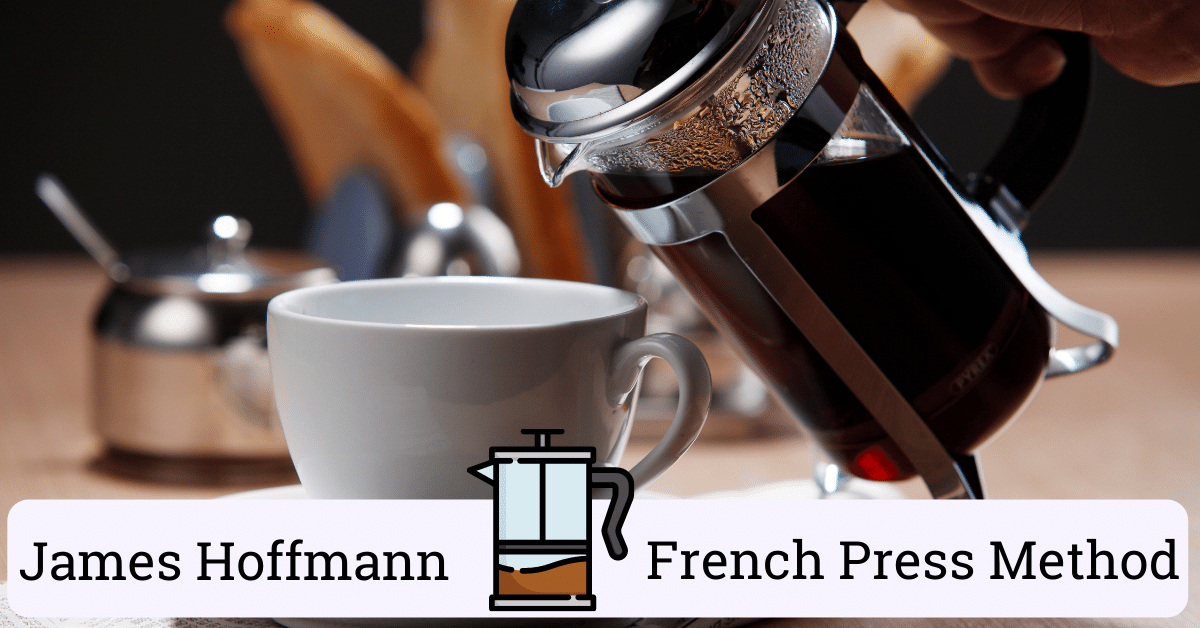 If you are anything like most people, you love coffee and hate to start your day without it. Coffee is a quick waker-upper and there are many good methods you can employ to make it. The question is, is the James Hoffmann French Press method any good, and if so, how do you make it?

Many who have tried the James Hoffmann French press method have reported that it is better than most other recipes out there. Some have even reverted to the French press after trying it. However, for those out there who prefer differently, there are several alternative methods available.

James Hoffmann French Press: The Details and the Recipe

If you have heard of James Hoffmann coffee, but you’re not quite sure what all the fuss is about, don’t worry because you are probably not alone. James Hoffmann has created a statement of his own to be sure, but who exactly is he, and why is so much attention given to his coffee recipes (specifically his French press)? Let’s find out.

James Hoffmann is a British businessman and entrepreneur who (believe it or not) has, in essence, made an entire career out of coffee! He has remarked that he’s been doing all coffee-related things since the year 2003, and since that time, he has written books, started businesses, and become one of the richest entrepreneurs out there. His achievements also include being 2007’s World Barista Champion and being the co-founder of Square Mile coffee roasters.

So now you know who James Hoffmann is. Let’s discuss his French press method next.

This typically leaves you with a cup of coffee that is strong and well-flavored. However, James Hoffmann (and of course his followers) would say that pressing the grounds down results in a sense of over-extraction that leaves the coffee’s flavor a bit too overpowering.

If you were to employ Hoffmann’s method, you would make the coffee in the French press the same way, but use the plunger a little differently.

Instead of pushing the coffee grounds to the bottom of the carafe with the plunger, Hoffmann suggests simply pushing it down far enough to barely touch the coffee, then let it remain at the top to act as a filter. This way, when you pour your coffee, you’ll still get all the good stuff without the grounds. This method results in a much lighter, perfectly extracted cup of coffee that won’t overpower you with its flavor.

As for the recipe, it is very simple. The recommended amount is fifty grams of coffee (with a medium grind). As mentioned above, simply pour in the coffee grounds followed by water that has just been boiled and let it sit for four minutes or so. Then, once you have noticed a crustlike layer starting to form, stir it up and remove the foam and floating grounds with a spoon.

Let it sit for five more minutes or for however long you might like. Keep in mind that the longer you leave it, the more prominent and strong the flavor will be. Once you have let it sit, just push the plunger down until it barely touches the coffee, then pour yourself a cup, and enjoy!

What Do the People Say?

On the flip side, other people would say that they prefer a much stronger and more flavorful cup of coffee, and the James Hoffmann method simply won’t do it for them. Whether this method is good or not essentially comes down to your opinion on the matter and your tastes in coffee.

Pros and Cons of French Press and the James Hoffmann Method

The pros do seem to outweigh the cons in the instance of James Hoffmann coffee, but there are still cons to be considered. Again, most of these do tend to depend solely on what your personal preferences are, however, they will be nice to know all the same. Here are some pros and cons of French press coffee!

If nothing else, the French press method is one of the most elegant and stylish ways to make coffee. If you are the proud owner of a French press coffee maker, you can depend on it not to be an eyesore in your kitchen. It will not take up very much space, plus, as said before, it is of a very elegant design.

Additionally, French presses are typically inexpensive and easy to find. All you need to pay for is the carafe itself, which does not come at a high price usually (however, keep in mind that this does typically depend on the brand). You also have to buy the coffee grounds, but this is not usually a high expense to be responsible for.

The French press is also one of the easiest coffee makers to use. The process is very straightforward. All you have to do is pour the grounds and the water into the carafe, let it steep, plunge, then pour and enjoy. There are no buttons or settings to worry about and nothing that could possibly confuse a coffee lover anywhere. If simplicity is your fancy, then a French press is the right way to go where coffee is concerned.

The biggest pro to using the James Hoffmann method is probably the flavor and strength factor. By simply using the plunger as a filter rather than forcing the grounds to the bottom, you are rewarded with a lighter flavor without it being over-extracted. Again, this is only a pro if it caters well to your tastes, but a great many people do prefer the light taste and lower strength.

It is also probably one of the easiest coffee methods to master. Because the process is so simple, you won’t have a difficult time mastering it in exactly the way you like it. A few trial runs will quickly help you to learn how long to leave it and to achieve the strength that you like best. You can continue to experiment with different amounts of grounds and different steeping times to discover different flavors and strengths.

French presses are easy to clean in comparison to other coffee makers. A French press only has three parts: the lid/plunger, the handle frame, and the carafe itself. Those can easily be taken apart (including the plunger) and cleaned with no problem at all.

You can also use your French press for a cold brew during warm summer months, which is just as easy to make as a normal morning brew. This limits the number of tools you might have to use otherwise, plus you can use the same setup for both hot and cold coffee. The French press is versatile and classy!

On the downside, a French press isn’t always as perfect as it sounds. The James Hoffmann method does provide drinkers with a lightly flavored brew, but because you are not supposed to push the plunger down all the way, the smoothness of your coffee could be in question.

Another irritating part of using a French press is the leftover sludge you’ll have to deal with when the coffee has run out. This sludge consists of the leftover coffee grounds and particles that may have slipped through the filter (if you don’t have a good quality filter, the worse this problem will be!) This means you have to be careful about when you stop drinking because if you drink all the way to the bottom of the mug, you will likely end up with a large mouthful of sludge. Nothing will ruin your morning cup more than that.

Additionally, the French press method will leave you with the possibility of over-extracting your coffee since you are steeping it in water. This means if you let it sit for too long, you might be left with an odd-tasting coffee on your hands. However, this is less of a problem if you employ the James Hoffmann method because the entire point of not using the plunger is to prevent this issue.

If you use a French press to brew your coffee, you will probably never taste the same coffee twice. The flavor varies depending on several different factors, whether it’s using too many or not enough beans, or letting it steep too long or not long enough. It can be easy to master, but you will have to be extremely precise if you are to truly define the flavor you prefer.

If you have read the pros and cons and decided that James Hoffmann’s French press (or just French press coffee in general) is not your cup of tea—or should we say coffee—don’t worry because there are plenty of other ways for you to make your morning cup of joe.

Drip coffee is one of the most familiar and convenient ways to brew coffee, even if it isn’t the best. However, many people seem to actually prefer a less-than-stellar cup because there seems to be something special about it. Drip coffee makers are easy to use, easy to clean, and will provide you with an acceptable cup if nothing else. The quality is probably the only downside. If you are looking for quality, the drip coffee maker is not for you.

If you are particularly in favor of experimenting with your coffee’s flavors (subtle as it might be) then a pour over coffee maker will be your best friend. This is similar to a French press, except you don’t have to use a plunger or wait too long for it to steep. Plus, as said before, you can easily experiment with different bean variations and amounts. The coffee chemist will be extremely happy with this choice.

The Aeropress coffee maker is ideal for those who are constantly on the go. It is somewhat similar to a French press, but the Aeropress is much smaller and more portable. This makes it a perfect choice for car trips, camping trips, and pretty much anywhere you go! Really the only downside to using an Aeropress is the fact that you won’t get nearly as much coffee out of it at once.