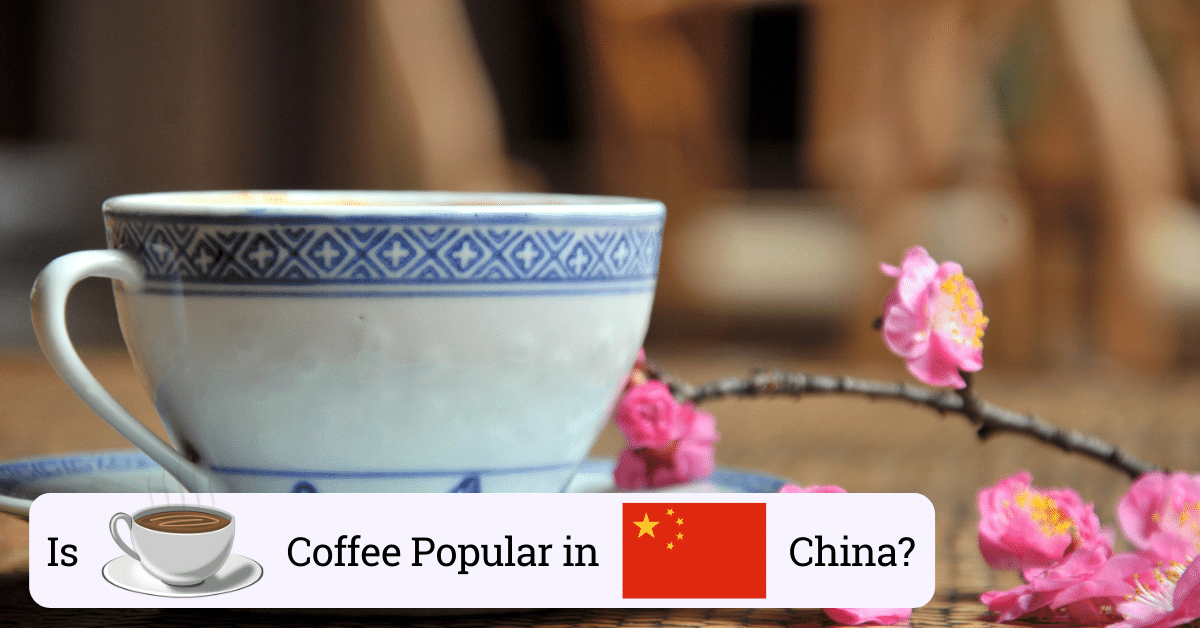 When you first think of China, tea probably comes to mind first as its invention was there. However, as the coffee market grows and becomes widely popular worldwide, you may wonder if this trend has taken off in China?

The coffee crop in China recorded substantial growth in the past ten years. Estimations show that the population between 2020 and 2021 consumed over 3.7 million sixty-kilogram bags. Shanghai even has the most coffee shops in the world. Millennials are a significant contribution to its success.

The hashtag “coffee” on Instagram alone has over 150 million tags. The significant influence that social media has on today’s society is no wonder that the youth of China are all about embracing the coffee trend! To better understand the modern Chinese coffee industry, let’s first examine the history.

The History Of Coffee In China

In the 1800s, as coffee spread worldwide, it made its way to China, where a couple of cafes sprang up around Shanghai, including Shengchang Cafe, which, though not in its original form, still exists today. Although coffee was highly specialized in this era, it was not as significant as later.

In the 1980s and 1990s, Western culture started to influence China considerably. Nestlé first sold instant coffee in China in 1988. Starbucks would be one of several global brands to benefit from the massive, rapidly modernizing population. Although the first Starbucks opened in Beijing in 1999, Chinese people slowly embraced coffee and cafe culture.

People saw coffee in China as an expensive gift until the 80s and 90s that all changed!

Now that you know the history of coffee in China, it is time to see what coffee has become in China today. Coffee is not about the taste in China but remains more of a fashion statement/social status in real life and all over social media posts.

However, the popularity of coffee in China is being driven not only by the growth of Western companies but also by changing the perceptions and food and beverage priorities of a younger Chinese generation (millennials). Records show that coffee consumption between 2008 and 2018 grew by over 1000 percent! It is no wonder China is said to be the fastest-growing coffee population globally today!

Starbucks first opened its doors in China in 1999. The brand grew slowly over the next decade, but it has rapidly grown since the late 2000s. Starbucks’ fastest-growing market is now China, where a new store is said to open every 15 hours! To date, there are over 5400 stores on the Chinese mainland.

The world’s largest and most opulent Starbucks is in Shanghai, offering a multilevel experience complete with a roastery, innovation center, and high-end chocolate shop. It’s more than what we’d expect from a Starbucks, and it’s popular with both tourists and locals.

To prove the high demand for westernized coffee brands, here are other western coffee brands making an impact in China:

Although Starbucks is Chinas leading coffee brand, it also has local/domestic brands making a significant impact on the Chinese coffee market. Luckin Coffee Inc., which opened in Beijing in 2017, is a Chinese consumer brand that has taken over the stock markets in the United States (LKNCY). In May 2019, the coffee chain, which was only two years old, went public in New York, raising $645 million.

A share and a convertible bond sale netted another $778 million a few months later. However, they were delisted from NASDAQ stocks in 2019 due to an accounting fraud in which they fabricated retail sales. Today Luckin Coffee is still alive and open for business and is impressively second to Starbucks. According to the company, its retail outlets are still open for business.

According to the company, its creditors voted unanimously to approve a restructuring plan for $460 million in 0.75 percent senior convertible notes due in 2025. With over 5000 stores across China, they are still consistent in releasing new drinks, so you can still go and try out their affordable luxury beverage items.

What Does Coffee Cost In China?

A cup of ‘real’ coffee in China can cost you anything between 20 and 30 yuan, but that all depends on where you purchase it. Starbucks in China costs 20% more than in the US; a drink can easily cost more than an entire meal at McDonald’s, which is several times more expensive than a simple dumpling dinner. The cheapest iced Americano in Beijing is 21 yuan per cup.

A more affordable option would be to try local coffee branding like Luckin Coffee which is around 12-14 yuan per cup(2.20$USD). Maxwell House and Nescafe can be found in most supermarkets if you need some small instant coffee sachets for a quick yet affordable fix. In Beijing, they cost about 15 yuan for 6 sachets (15 yuan for 20 sachets in Guilin).

Coffee entered China over 200 years ago; however, it started to make a huge impact in the 1980s and 1990s. Coffee used to be known as an expensive gift, but now thanks to the youth of China, coffee is all about status, not taste, and is therefore very popular.

Both local and Westernized brands have significantly influenced the Chinese expanding coffee market. Although these drinks tend to be more pricey local supermarkets, offer more affordable instant versions. Based on the popularity, it is safe to say that this tea-loving population has certainly embraced and welcomed the coffee trend!