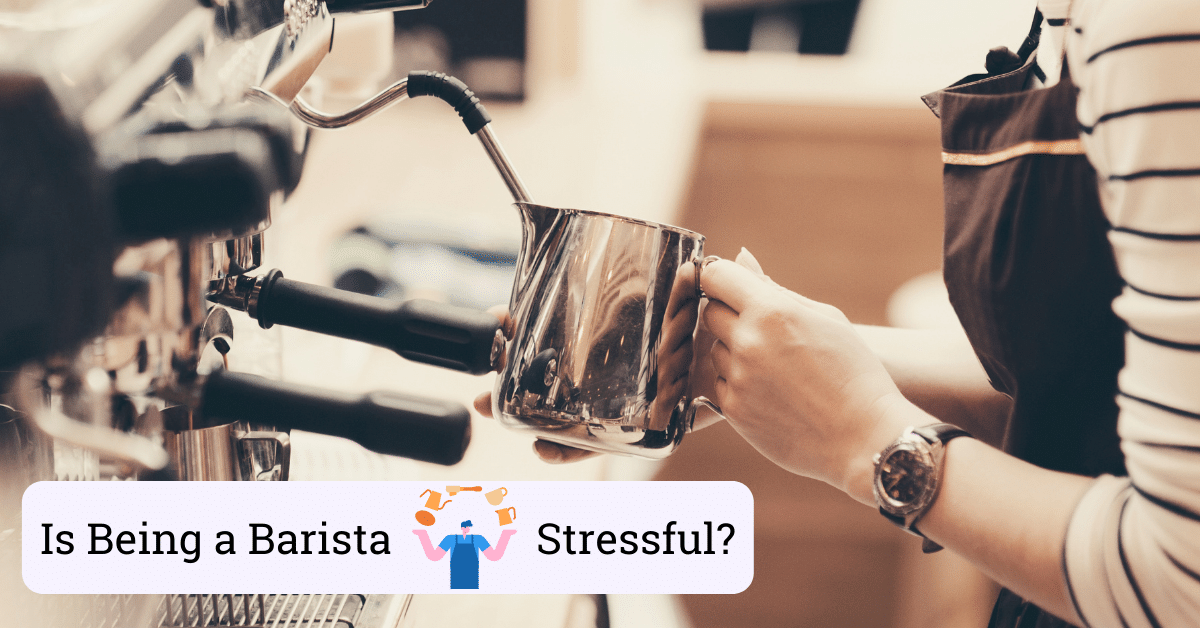 Some people think baristas are just one step up from servers at McDonald’s while being a step down from waiters. This is 100% false, as there is no other field of work that comes close to being a barista!

In a survey including 475 baristas, 47% of baristas experience upper body repetitive stress-related injuries. 20% of baristas experienced chest pains or heart palpitations. And lastly, 62% of the baristas believed that their job caused emotional problems such as depression, mood swings, and trouble interacting emotionally with other people.

Being a barista is stressful, painful but also incredibly fun. What are the stressful or otherwise challenging parts of being a barista? And is it enough to scrap this as a career choice? Let’s find out.

The Physical Aspect of Barista Stress

There are several different things every barista has to keep in mind when on shift. These are things like which cup or glass to use for which drinks, how many espresso shots are needed, and how to present each drink to a customer correctly. The list can go on and on and on.

Pair this list with the busy rush hours of most coffee shops, and you’ll see that it equals a stressful and intense situation. Because of this, it is crucial to appreciate and recognize the skills that baristas have to learn and the challenges they face each day of their career.

Along with a few technical challenges, baristas are presented with a lot of physical stress as well. The physical toll that this job description takes on a barista’s body is:

These are all common symptoms of a busy employee in the hospitality career. It can get extremely overwhelming very quickly. Believe it or not, many people tend to look down on hospitality jobs such as baristas and merely see them as menial or as having too low of a skill set for anything else.

However, it has been reported that working in the hospitality industry can be seen as one of the busiest and physically demanding jobs. When baristas are asked a series of questions related to physical stress while working as barista, many confirm that it is a legitimate trend in the industry.

Several baristas claimed that they often experience severe neck pains from constantly looking down when making drinks. Along with the neck pains, come leg and feet aches from being on their feet for most of the day. Many baristas also suffer from lower back pains, from not resting enough, and overworking themselves.

Repetitive muscle strain also occurs commonly among baristas, and many say that they need to use heat packs on their ankles and backs at the end of their shifts. When it comes to physical stress, management and shop owners do little to nothing to help their employees.

Barista wrist is known to be the leading cause of injuries in the restaurant trade. So much so, in fact, that it has gotten its own name, and rightfully so! The main cause of this injury is from repeating the same motions over and over daily.

This injury is known to be caused mainly amongst baristas by tamping (something every barista can do hundreds of times daily). Many traditional tamping tools and techniques forces a barista’s hand into an unnatural and not at all ergonomic position. Over longer periods, excessive tamping can result in injuries to the tendons and tissues in the wrist.

This inevitably causes a lot of weakness and pain and can lead to loss of grip that comes along with mobility problems. As far as physical stress goes, researchers found that 45% of cafés reported that they lost a lot of time due to barista wrist injuries being the most common reason.

Some baristas are fit to return to work after such injuries, while some may never be able to return. This could all be avoided by using tools that reduce muscle soreness and wrist strains caused by wrong hand positions.

Working long hours without having enough time to take off and rest will also contribute to barista wrist injuries and other types of physical stress baristas undergo.

The Emotional Aspect of Barista Stress

A barista’s job goes far beyond just serving coffee. They also need to be polite and sometimes over-friendly to customers. If a barista does their job correctly, it may even lead to the customer walking away thinking that it was a genuine pleasure to serve them and that it isn’t only the barista’s job but their passion.

In many hospitality jobs, the enthusiasm that needs to be projected towards customers is just a way of getting some extra tips on top of the employee’s basic salary. The term “service with a smile” may be exactly what invited this type of over-friendly behavior. It encourages affiliative motives and friendliness rather than acting professionally and creating efficient motives.

There are many ways where business owners can avoid worsening the emotional burden on baristas in general while still meeting and even exceeding the general expectations of customers. It can be much better if businesses set the tone and vulture for their establishments by simply communicating expectations to their customers.

Being a barista can be one of the most emotionally challenging jobs in the whole hospitality industry.

Of course, the baristas are being expected to do all these things with a smile and great attitude, despite being in the presence of impatient, rude, or disrespectful customers. They do this all to be rewarded with tips instead of getting higher wages or better benefits.

These things can all take a huge toll on the emotional well-being of a barista. Many baristas also speak of feeling constantly overwhelmed during the rush hours, without having time in between to recharge their physical and emotional batteries.

It is clear that baristas are part of a high-emotion service job, and it can take a toll on their physical health as well as mental health.

Better management and schedules can be put into place where baristas rotate different positions more, which can be a great start to bettering and even stopping the physical and mental issues that every barista needs to deal with daily.