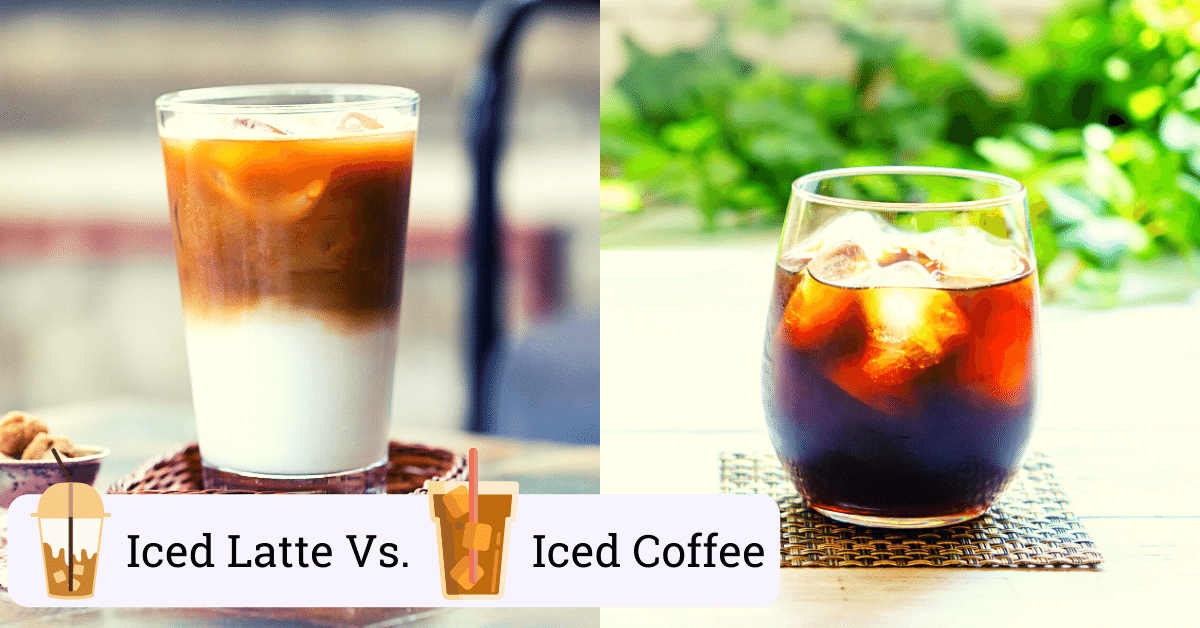 If you’re a coffee-lover trying to differentiate between an iced latte and an iced coffee, then you’ve come to the right place. These refreshing, chilly beverages can be a bit confusing to distinguish between, but actually have distinctive features that make them rather different.

Iced Latte Vs. Iced Coffee: Iced lattes generally consist of 1/3 espresso and 2/3 cold milk, generally served with ice cubes; however, ice cubes are not a necessity. Conversely, iced coffees are made using 90% cold-brewed coffee and 10% milk and ice cubes or crushed ice.

Let’s explore the differences between an iced latte and an iced coffee to find out which chilly beverage is best for you.

Here are the distinguishing factors that make an iced latte completely different from an iced coffee. These differences will help you understand which chilly, caffeinated beverage might be best suited for you.

Iced latte is made using espresso from an espresso machine. The espresso is then mixed with milk and poured over a few ice blocks.

An Iced Coffee Generally Tastes Stronger Than An Iced Latte

Iced coffee generally contains more coffee than an iced latte, causing it to have a stronger taste. Conversely, an iced latte is likely to be less strong due it the balanced, mellow taste created from the amount of milk the cold beverage contains.

Due to the fact that iced lattes are specifically designed to be made from milk and espresso, it’s only natural that the beverage has to contain a substantial amount of milk.

In contrast, milk is not a prerequisite for iced coffee. In fact, many coffee drinkers enjoy their iced coffee without milk as they feel it distorts the authentic taste of the coffee.

Whether you add milk to your iced coffee or not is a personal preference based on how you like your coffee. If you’re someone who enjoys a milky coffee without having a prevalent coffee taste, then iced coffee with milk is your best bet.

However, if you’re someone who likes the strong, authentic taste of coffee, then it might be better to have iced coffee without milk.

Adding milk alternatives to your iced latte or iced coffee will not weaken your drink in any way. However, the flavor of your milk alternative may alter the taste of your cold beverage.

If you’re lactose intolerant or vegan, then these milk alternatives allow you to enjoy iced lattes and iced coffees without compromising your health or values.

Since coffee contains no calories, the calorie difference between an iced latte and an iced coffee will be dependent on the type of milk used, the amount of milk used, whether sugar is added, whether syrup is added, and whether the drink is topped with whipped cream.

Generally speaking, iced coffee made using black coffee and ice will have zero calories. However, if you add milk, the calorie intake will increase depending on the milk you use. Additionally, the milk you use will impact the amount of fat in your drink.

Due to the high milk content required for iced lattes, iced lattes are generally higher in calories. Therefore, if you’d prefer a low-calorie iced beverage, then iced coffee is your best bet.

Ice Cubes Are Not A Necessity For Either Drink

When it comes to adding ice, baristas have different ways of making iced lattes and iced coffee.

There is no strict rule stating that ice must be added to iced lattes or iced coffees as both beverages are generally made using cold ingredients. Therefore, ice is not a necessity when it comes to either of the drinks.

Most baristas include ice in their iced lattes, whereas others may refrain from adding ice as they prefer the drink to have a layered coffee appeal and believe the drink is already sufficiently cool.

Generally, both iced lattes and iced coffees are serviced using ice cubes. It is more likely that you’ll find ice cubes in iced coffee; however, some baristas use crushed iced instead.

Sweetener, Whipped Cream, and Syrups Are Often Used To Sweeten Both Iced Drinks

Some may find it necessary to add sweetener to their iced coffees and iced lattes as the coffee taste may be a bit strong for them.

Additionally, some baristas may top iced lattes and iced coffees with whipped cream to make both beverages more dessert-like.

Often, flavored syrups are added to iced lattes and iced coffees to add more variety to the drink.

Iced Coffee Can Be Made With Ice Cream, Whereas An Iced Latte Cannot

An iced latte is intended to be a straightforward cold espresso-based beverage, whereas iced coffees are generally sweeter and can be considered a dessert-like beverage.

Given that iced coffee is a dessert-like beverage, barista’s often incorporate ice cream into the ice mixture if they’re creating a crushed iced coffee. Additionally, sometimes baristas sweeten their iced coffees by topping them with ice cream and sometimes even whipped cream.

Iced coffee is the ideal drink if you want a strong, low-calorie, chilly beverage. On the other hand, iced lattes are better suited if you’re in the mood for a more balanced, milky, yet chilly caffeinated beverage.