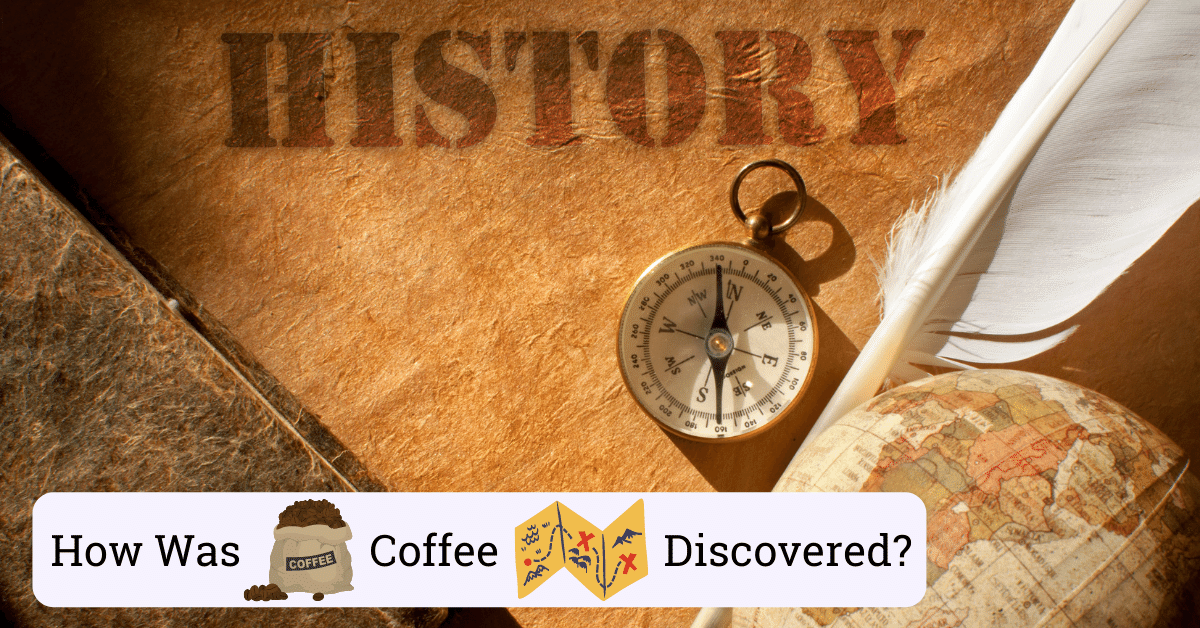 Most people cannot function without a cup of coffee in the morning. The latest coffee statistics show that about 150 million Americans consume more than 140 billion cups of coffee per year. It has become a household necessity, but no one really knows the history of coffee and how it took the world by storm. So, how was coffee discovered?

Legend has it that goat herder, Kaldi first discovered coffee after learning that the berries his goats consumed from an unfamiliar tree made them hyperactive and unable to sleep at night. After testing the strange berries, he went to the local monastery about his discovery.

The Kaldi legend is not the only theory on how coffee was discovered. Other popular stories surround the discovery of coffee. Read on to learn more about the history of coffee and how it ended up becoming a global sensation.

How Coffee Was Discovered

One thing we are sure of is that coffee beans originate from the African country, Ethiopia.

Coffee was first used by hunters, who would eat the coffee beans to make them feel more energetic when they go on long runs to hunt for food.

Coffee was made as a beverage to help Muslims during Ramadan. During this religious celebration, Muslims would drink coffee to stay awake during the night and curb their hunger during the day.

Word spread fast about the magical plant, and by the 16th century in the Arabian Peninsula, coffee was being produced across the world. It became so well-liked that people saw it as an opportunity to make a few extra bucks.

Multiple coffee houses were established, called qahveh khaneh. These coffee houses were popular, and once people discovered them, they would order coffee beverages while doing various social activities such as playing chess or watching performances.

But not all continents were very accepting of coffee at first. After European travelers came back from Africa (in the 17th century), news spread about this beverage.

But because of its effects, Europe deemed it and by 1615, Venice reprimanded coffee. However, after the Pope got a taste of the wonderful energy drink, he was astonished. He quickly declared the coffee beverage as the “ultimate Christian drink”.

By the mid-1600s, there were over 300 coffee bars in London. Coffee bars quickly popped up all over Europe. The first coffee club opened in the United Kingdom, where only wealthy men could enter. If they were not at work, they would debate over religious and political news.

After coffee traveled through Africa, Asia, and Europe, it made its appearance in America during the mid-1600s.

No one is certain about when coffee was first discovered, but a few theories try to explain how this tiny bean caused a frenzy among people worldwide.

The Case Of Kaldi And The Energetic Goats

The Ethiopian legend of the goat herder, Kaldi, became the “most accurate” story of the discovery of the coffee bean. The legend goes that Kaldi noticed his goats were loaded with energy and could not sleep at night after consuming berries from an unidentified tree.

Kaldi became curious and decided to try some for himself and was amazed by the results. He conveyed his findings to the local monastery, but the monastery was quick to dismiss Kaldi and claimed it was nonsense, but once they got a whiff of the delicious coffee aroma, they could not resist it any longer.

Soon drinks were made of the coffee beans that helped them get through the tough hours of prayer. Later, the community would mingle with others while sipping on their coffee beverage all evening long.

The hype around the coffee bean grew, and the people would do anything to taste a sample of the caffeine refreshments.

The indigenous Cushitic-speaking people of Oromo in Ethiopia have a different version of how coffee was discovered.

The Oromo of Ethiopia considered Waqa or Waaq as their creator who dwelled in the clouds. They believed that God Waqa germinated coffee beans from his eyes after crying when he had to sentence one of his devoted men to death.

The Oromo was convinced that the coffee beans would only sprout from the tears of God Waqa. Still, after all these years, coffee is treasured and admired by the Oromo culture.

Another exciting folklore about the discovery of coffee is about a man named Omar.  Omar cured people through prayer, but he was banished from his own town for an unknown reason. When hunger struck, Omar decided to pick berries from a tree to eat but despised its bitter taste. After trying to roast it on fire, the berries only hardened.

Before he gave up, he wanted to try one more possible solution. He boiled them, and soon enough, the bean softened. Omar became the first person to drink a cup of coffee.

Although he did not have enough food, the coffee helped him stay alert and sustained. He made his discovery known to the townspeople, and they were ecstatic, even going as far as declaring Omar a saint for introducing this powerful drug.

Now, you can consume coffee in many ways and prepare it by using the latest technology. Places like Starbucks are known for their mouth-watering caffeine beverages and have expanded their business all over the world.

For some people, grabbing their favorite caffeinated drink is exactly what they need to enhance their mental alertness and relieve fatigue just to get through the day.

It is always exciting to read folklore, especially if it is about something we are fascinated by. In this case, it is coffee. The truth about how coffee beans were discovered may never be known, but it is always great fun to speculate. Maybe it really came to be when a God mourned the loss of one of his men or when the goats drove their herder mad by consuming mysterious berries.

We should be thankful to whoever discovered it; otherwise, we would not have had coffee café’s we could visit to gossip with friends or warm up in while we sip on coffee in the early winter hours.