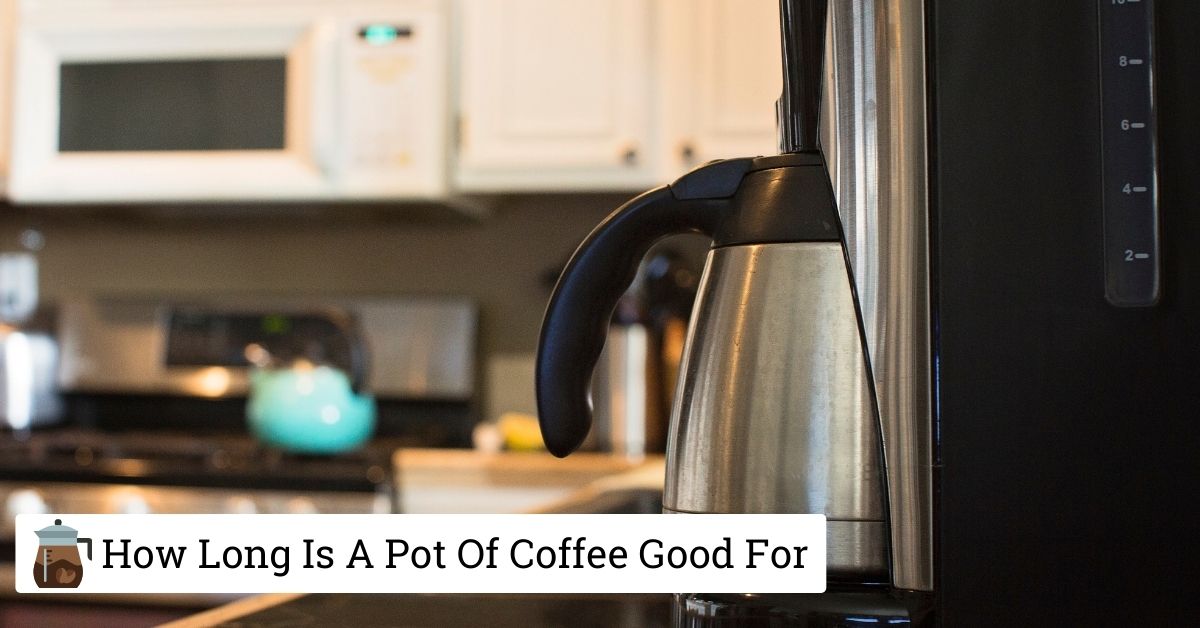 Any discussion on coffee is guaranteed to offer up a different theory per person, and the length that a pot of coffee remains good is one of the most widely debated. People have the broadest possible opinions on this, ranging from leaving the pot just three or four minutes to letting the pot ‘strengthen’ overnight.

Coffee starts to oxidize after about thirty minutes and will deteriorate in freshness from there. Hundreds of thousands of coffee drinkers regularly consume pot coffee after several hours, so there is clearly no danger, but the coffee will change in taste the longer you leave it.

I often liken the contributors in this discussion to live concert crowds in areas that don’t have a lot of concerts. People who attended will swear blind that the concert was ‘amazing,’ ‘awesome,’ ‘historic’ etc., when it was poor at best, with inferior sound, no apparent effort made from the band, and lasted only 50 minutes. It’s all perception and personal taste.

How Long Is A Pot Of Coffee Good For?

Before we look at the wildly-varying opinions of the experts – so-called and actual – in the coffee world, let’s keep this simple: If you have a specific timeline for the longevity of a pot of your favorite brew, that’s perfectly fine. Let no one correct or ridicule you. The primary and overriding point of drinking coffee is to enjoy it, so regardless of how long you allow your coffee pot to brew if you enjoy it like that, how can you be wrong?

Is Coffee Safe To Drink After Standing For A Long Time?

Well, recorded deaths from drinking day-old or two-day-old coffee are sketchy at best, and hundreds of thousands of night-shift workers, soldiers, white- and blue-collar staff, and even hospital workers do so daily. I certainly can’t find the reference if anyone has ever died from drinking stale coffee.

One of the biggest arguments at a coffee pot is whose turn it is to refill, and with human nature being what it is, the pot is often left far longer than planned, due on occasion to laziness or stubbornness. ‘I’d rather drink the dregs of this pot than be forced by you into changing the coffee. It’s your turn.’ Sound familiar?

For reasons of expense, unwillingness to waste, or simply habit, an enormous number of partial pots of coffee are turned off at night, left in place, and then turned on again in the morning when the family rises or workers re-enter their workplace. The first cup out is often seen as the jewel in the crown, with the lucky consumer boasting of its strength and revitalizing properties.

The machines tested were from a random selection of Chicago households, showing that coffee machines do contain bacteria, and thus so will coffee pots. (So will your refrigerator, blender, oven, and just about every appliance in every kitchen in America.)

Chuck Gerba, who is a professor of microbiology at the University of Arizona, states that a significant source of germs is coffee cups, particularly if they’re shared amongst several co-workers. A study he co-authored in 1997 examined office coffee cups and found amongst other germs, E. Coli and even fecal matter were found in 50% of the cups.

Bacteria exist everywhere, as we have learned during Covid-19. We live with bacteria and even need some of it in our daily lives, so keep your coffee pot properly clean between brews, and you should be fine. Use a fungal removing agent at least once a month in addition to strong, regular cleaning.

Does Coffee Degrade After Brewing?

Certainly, coffee, like wine, will start to oxidize when it encounters oxygen, but it is only later that the taste will begin to change. This time delay will depend on several criteria, not the least of which is your palate. If you still enjoy the flavor after two hours, then the coffee is still okay.

However, if you are making coffee for others, you might want to consider their tastes, too. Coffee lovers can notice coffee taste changes within 30 minutes, and after an hour or two – depending on the volume in the pot – the brew will taste scorched or burnt to many. Once the coffee reaches this stage, it is beyond salvage.

Does Coffee Strengthen After Standing?

No. The water is no longer in contact with the ground coffee, so it cannot strengthen, but it will become tart with oxidization, and as it stales, this is often confused with strength.

Can You Leave A Pot Of Coffee In The Refrigerator Overnight?

Indeed, a night in the ‘fridge rather than the same period on the counter will somewhat prolong the coffee’s life. Remember to cool the pot first, or preferably, store the coffee in another container while you wash the pot in preparation for the next day. An even better solution may be to make a smaller pot of coffee if this is happening regularly and toss the dregs away at the end of the day.

The Best Formula For A Great Pot Of Coffee

Unless you really cannot taste the difference between fresh and older coffee, I recommend starting with a well-cleaned pot in the morning. Brew the coffee at the last possible moment and drink it while it’s fresh. Once the staff has had their daily dose, rinse the pot in boiling water, dry it out and set it aside for the next brew.

This might be an hour later or the next day, but you will always have the freshest coffee possible from your coffee pot, and you won’t have unnecessary health concerns.

Caveat – Once you add milk or creamer to your coffee, your timeframe for longevity and safety changes immediately. Unless you can refrigerate the coffee, I would discard it after one hour at most.

I drink my coffee the freshest way possible and would rather avoid a cup brewed more than 30 minutes earlier than drink tired coffee. However, that’s the way I like mine and no reflection on those who are happy to drink coffee several hours old. Drink your coffee the way you enjoy it…