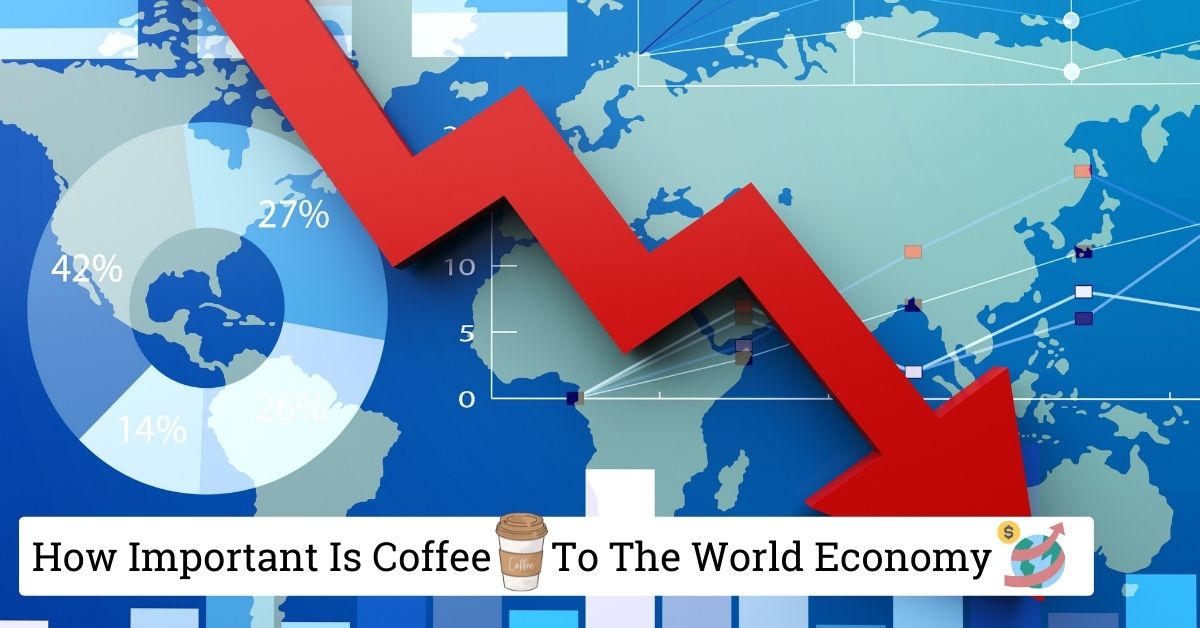 It’s time for a confession – I love coffee in every shape or form! However, it looks like I am not alone, as coffee sales have nearly doubled in the last decade and are currently worth a whopping $90 billion – with over 2.2 billion cups of coffee sold daily across the globe.

While you might be able to tell your dark roasted Italian espresso from your mild German roast, coffee’s impact on the global economy and small-scale rural communities is mind-boggling. So, if you would like to know more about your morning Cup of Joe – read on!

While the bulk of coffee is cultivated in impoverished South American countries, it is mainly consumed by developed countries with thriving, upwardly mobile economies.

Coffee is a vital agricultural commodity for approximately 20-25 million small-scale farmers across the globe, which supports about 100 million family dependents and their wider rural communities.

A prime example is Brazil, where over 5 million laborers are employed to cultivate and harvest more than three billion coffee plants.

The Brazilian coffee cultivation is not automated and requires a lot more labor in comparison with sugar cane harvests or rearing cattle.

Coffee is the overarching lucrative export commodity in several developing countries and is the second most lucrative or legal export in those countries.

Green or unprocessed coffee beans are one of the most traded commodities around the globe, especially in New York’s Intercontinental Exchange, Board of Trade, and Mercantile Exchange trading platforms.

Other notable coffee trading or processing establishments include European cities like Trieste and Hamburg.

While coffee’s commercial value from a global trading perspective cannot be compared with, e.g., petroleum, it is the prime source of revenue for developing countries, e.g., East Timor.

Coffee sales volumes are also subject to dramatic fluctuations ranging from $14 billion in 1986 to a mere $4.9 billion in 2001 during the lengthy “coffee crisis,” which had dire consequences for small-scale coffee producers in developing countries.

On the other hand, retail branded coffee product prices are more affected by consumer habits and less so by wholesale traded commodity price fluctuations.

Coffee Is Vital To The US Economy

The national and specialty coffee associations of America commissioned a comprehensive study on coffee’s financial impact on the US economy in 2015, and the results were startling, to say the least!

The report found that coffee generated $225.2 billion US dollars, and it created nearly 1.7 million jobs, including approximately $28 billion in tax dollars.

Coffee is the most widely consumed US beverage which even beats tap water consumption, and its complex supply chain creates jobs in various sectors ranging from dairy farms to supermarkets.

Most of the economic activity is in the food service industry, which generates income for the owners, waiting for staff, cleaners, coffee distributors, marketing companies, equipment suppliers, and manufacturers.

The Economic Impact Of Coffee Classifications

Bird-Friendly Coffee is entirely organic and free from pesticides that 75% of the world’s coffee producers use. In comparison, Shade-Grown Coffee cultivars are cultivated under a protective canopy of trees during their growing process.

Fair Trade classified coffee, which is overseen by Fairtrade America in the US, is sourced from small-scale coffee suppliers in the developing world who have formed cooperatives.

Although Fair Trade certified coffee farmers are guaranteed a minimum fee for their produce, it is far below market-related prices. It has sadly become a hotly debated topic that requires further scrutiny.

Coffee supply chains vary significantly across the globe and tend to be complex as it includes many players consisting of farmers, buyers or exporters, importers, roasting companies, including retailers. Moreover, imported coffee is also exported in certain regions.

Small scale farmers in far-flung rural communities are primarily reliant on middlemen buyers or coffee “coyotes” to purchase their harvests as they don’t have direct access to other coffee distributors.

While more extensive coffee plantations either sell their harvest directly to global coffee distributors or processors at the New York Coffee Exchange rates or export it to other countries.

Exporters or substantial coffee plantation landowners then sell the unprocessed green coffee beans to importers in massive quantities, which they, in turn, sell to small-scale roasting companies.

Importers hold a lot of economic sway over roasters as they have vast financial resources to purchase and store vast quantities of superb coffee bean cultivars, which in turn dictates the coffee cultivars consumers enjoy today.

There are approximately 1,200 coffee roasting companies in the United States – roasting is by far the most lucrative aspect of the coffee supply chain.

Prominent roasters sell their re-branded coffee to retailers like Folgers, Maxwell House, or Millstone with substantial profit margins that are passed on to consumers.

The Final Link In The Complex Coffee Supply Chain

While most of the coffee sold to consumers is through specialty stores and privately owned cafes, up to 30% is purchased at reputable chain stores, and 60% is through large retail enterprises and little supermarkets.

A staggering 12-billion pounds of coffee is consumed per annum across the globe, and there are approximately 130 million coffee lovers in the United States at present, which is sure to see exponential growth.

To illustrate the value of coffee as a prized commodity, traders make enormous sums of money on the New York Board of Trade speculating on Arabica coffee sales prices and on Robusta commodity prices on the ICE London throughout the year.

Coffee was traditionally cultivated under tree canapes to shield the fragile plants during their growth spurts which in turn provided shelter for insects, birds, and other native animals.

Farmers employed organic agricultural practices by using coffee pulp compost and by cultivating fruit and banana trees to shelter the coffee plantation, which in turn aided the self-sufficiency and provided an additional source of revenue.

Regrettably, all those holistic farming practices fell by the wayside from 1970 and well into the ’80s due to the “Green Revolution,” which was spearheaded by the US Agency For International Development in collaboration with various other agencies.

Approximately $80 million US dollars was donated to coffee plantation owners in Latin America under the disastrous “Green Revolution” banner to increase their yield and, by default, destroy their natural heritage.

Farmers were encouraged to cut down their magnificent forests and grow coffee cultivars that thrived in sunny habitats and use pesticides that contaminated their water resources and the earth itself.

The sad legacy of the destructive “Green Revolution” was that most of the severely deforested Latin American regions between 1990 and 1995 were on coffee plantations.

The Pandemic’s Economic Impact On The Coffee Industry

Like most industries, the coffee industry experienced the tumultuous impact of the pandemic from a supply and demand perspective.

While it will take some time to collate quantifiable data on the pandemic’s true impact on the coffee industry, they are severe.

Various factors negatively impacted the coffee industry’s supply chain, most notably employees who became ill and could not work, factories that had to close due to COVID cases, and work-from-home policies that restricted coffee sales.

The pandemic also hamstrung the coffee export sector, which is primarily based in ports or warehouses, as they had to contend with delayed shipments and increased operational costs.

Warehouse business owners also had to deal with a reduced workforce, and the coffee transport sector was burdened financially by additional COVID mitigation measures like vaccines and delays caused by border screening measures.

While coffee exports declined by 3.7% between 2020 to 2021, prices rose dramatically at the inception of the pandemic due to increased operational costs. However, global demand remained constant as coffee is one of the fastest-growing commodities around the globe.

While the demand for exceptional quality coffee blends keeps on growing, especially amongst upwardly mobile younger demographics many small-scale farmers in developing countries are struggling because of the dire effects of climate change or political turmoil.

So, it’s vital to equip these farmers with adequate resources and sustainable coffee cultivation practices to improve their productivity standards of living and stimulate economic growth in deprived communities.

A prime example of a struggling coffee-growing region is Zimbabwe, where harvests declined from 15,000 tons in the 80s to a mere 500 tons in 2017 as a direct result of violent political unrest and a severe economic decline that decimated the entire coffee industry.

While in other prominent coffee plantation regions like Uganda and Colombia, political conflict and the devastating effects of climate change have wreaked havoc on their ability to produce and export substantive amounts of coffee.

To make matters worse, scientists currently believe that by 2050 climate change will reduce the amount of arable land by 50% that is suited to growing Arabic cultivars.

Although not all hope is lost if coffee consumers, governments, coffee brands, and NGOs unite in support of sustainable farming practices in vulnerable coffee-producing communities.

This impactful collaboration has been successfully demonstrated by Nespresso’s “Reviving Origins” initiative, which radically transformed the lives of struggling coffee plantation farmers and their vulnerable communities.

This robust global collaboration supports 3,500 farmers in the previously mentioned countries and forms part of a worldwide training initiative that supports more than 110,000 coffee plantation farmers.

The Rwenzori coffee plantations in Uganda were renowned for producing poor quality dried Arabica coffee beans, or DRUGAR, which consisted of a mix of unwashed ripe or unripe beans.

Farmers in this region had to sell their harvest at a vastly reduced price for various reasons, which meant that they did not have any capital to reinvest in their small coffee plantations.

However, with Nespresso and its partner’s support, the Rwenzori farmers were able to use the new cutting-edge drying and processing coffee stations sustainably to produce superb, export-quality coffee beans.

Other successful farming initiatives included the establishment of a plant nursery to generate new coffee plants and indigenous tree saplings.

So, coffee farmers could improve the quality of their produce, combat soil erosion, and enhance the biodiversity on their parcels of land.

We live in a deeply intertwined global community with the power to make ethical and sustainable coffee purchasing decisions to nurture our planet’s fragile biodiversity, uplift vulnerable communities, and safeguard near-extinct coffee cultivars for future generations.

Coffee is vital to the world economy, both on a micro and a macro level. But most of all, it is the lifeblood of vulnerable coffee-growing communities, and it’s great to know that coffee lovers like me now have the power to choose a guilt-free delicious Cup of Joe!