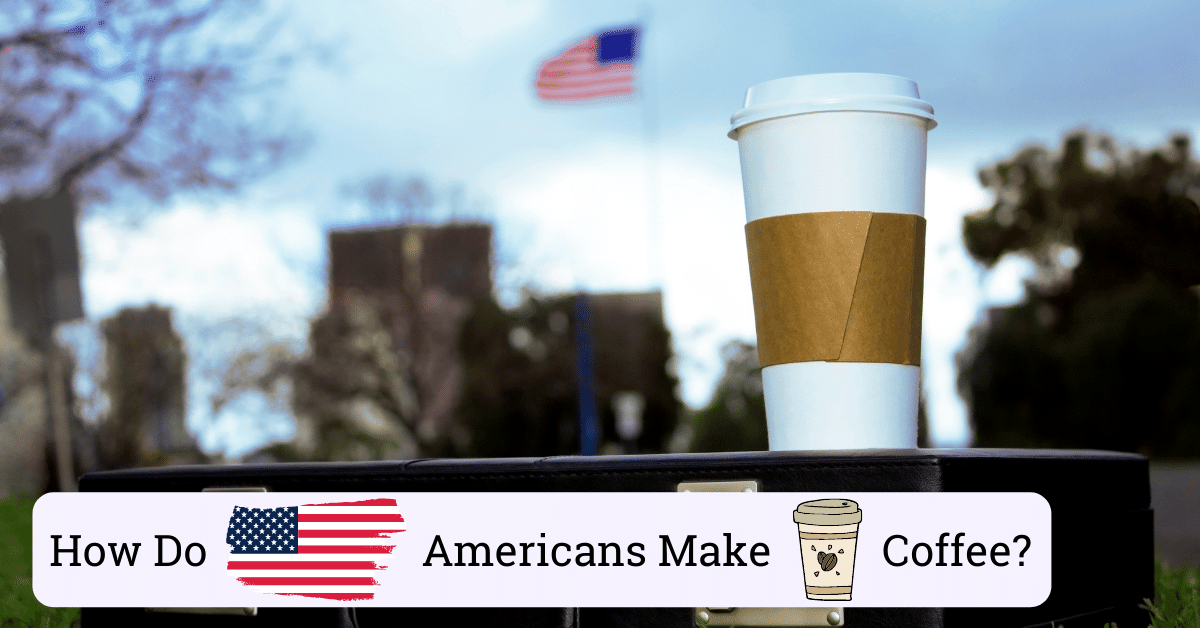 You may be interested to learn that America is ranked as 25th highest on the global list of coffee consumers. Although America does not rank as highly as Finland or Norway, Americans love their coffee, and they consume around 9.26 pounds of coffee per person per annum.

American’s prefer their coffee to be made in the style of drip-brewing. The coffee bean is ground into a medium powder, and it is poured into a filter coffee machine. Hot water is drip-filtered through the coffee grounds until only the flavorful dark brown liquid remains.

How Is American Coffee Made?

American coffee is made using Arabica coffee as it is more flavorful with much more intense flavors. The coffee beans are medium ground, not very fine, and not too coarse to avoid having a watery taste or a bitter, unpleasant taste.

The ground coffee bean is then filtered through a highly absorbent paper filter, and the brown liquid coffee drips down into the base of the coffee maker. The coffee is left inside the coffee pot and is not usually re-heated as that would cause the coffee to lose its rich taste.

Americans prefer to drink their coffee black without any sugar or milk.

The Americano is another style of coffee that is common in America. The Americano has a very interesting story behind it that dates back to the Second World War.

The Americano is made with shots of espresso coffee (usually between 1 to 2 shots), with boiling water added. The coffee bean used for an Americano is roasted for longer than a standard coffee bean, and it is ground finer than coffee beans used for filter coffee.

Americano coffee has become so popular that you will always find it on any coffee menu in any coffee shop or restaurant. So, the differences between Black Coffee and Americano are how these two types of coffees are prepared and the coffee bean used for making these two coffees.

What Type Of Coffee Beans Do Americans Prefer?

And now that we know how Americans drink their coffee and prepare it, we need to know which coffee beans are most used. When Americans prepare filter coffee, they use a medium roast, medium ground Arabica bean, or sometimes they also use Robusta beans.

So, what are the dissimilarities between these two types of beans, and why is one preferred over the other? Let’s find out!

The Arabica coffee bean is most widely used in drip coffee brewers only because it tastes much better. Arabica and Robusta beans originate from two different plant species.

The International Coffee Organization has estimated that about 60% of the world’s coffee is prepared from the Arabica bean.

Robusta coffee bean is great for use in coffee blends, and its harsh, bitter taste makes it excellent for use in Espresso coffee.

Fans of Espresso coffee enjoy their Espresso with a creamy and smooth texture, and using Robusta for a blend of Espresso makes this possible.

The caffeine content in a Robusta coffee is much higher than Arabica coffee, which makes using Robusta in a coffee blend almost a natural choice.

What Types Of Coffee Do Americans Prefer?

Aside from traditional black coffee made from drip-brewing the coffee bean through a filter machine, Americans do like to indulge in a few other coffee drinks.

Some of them you may already know of, having visited your local Starbucks! Now, I will list a few of the most common coffees that Americans enjoy drinking.

The traditional Macchiato drink, which has been gleaned from Italian that means; “stained,” is made by “smearing” the milk with a shot of dark Espresso.

The Macchiato is then made by pouring the steamed, frothed milk into a Macchiato glass, and the shots of prepared Espresso are added to the steamed milk.

Latte means milk in Italian, and it means the same in Spanish. A Latte is normally made with more milk than a Macchiato, but the difference is by no means dramatic. The Latte is made in a larger cup and has a higher proportion of Espresso.

A Caffe Latte or Latte as it is commonly known is most likely one of the most widely drank coffee beverages in America.

Some Facts About Americans And Coffee

Here are some interesting facts about Americans and how they like to enjoy their coffee.

In conclusion, American’s love drinking coffee, no matter the style or form. They can drink several cups of it throughout the day when they wake up to the time they go to bed at night.

For Americans, coffee is not just a beverage to be consumed, but it is also seen as a way to socialize amongst friends, families, and business meetings.

The phrase “Let’s go out for a coffee” or “Let’s get a Starbucks” has become synonymous amongst all Americans, and many people across the world have now adopted it. Americans have set the standard for how people in other nations of the world view and consume coffee.