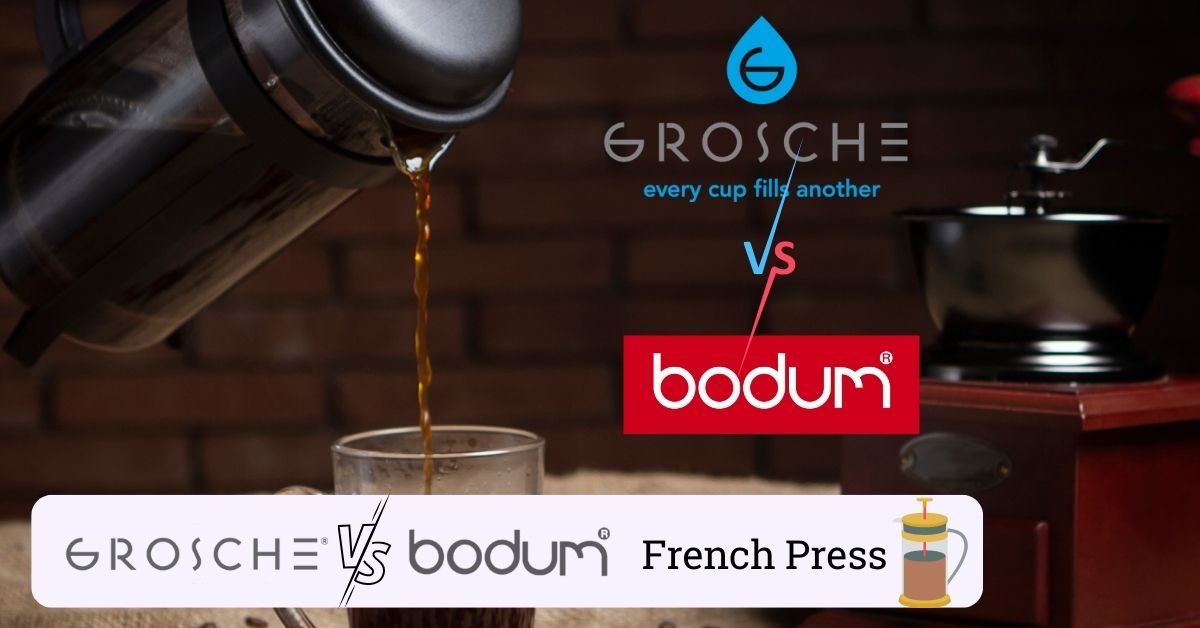 The world of coffee brewing is awash with various types of coffee brewers that are used for a vast number of brewing methods, but one of the most reliable and simple ways to brew excellent coffee is to use a French press. Two of the biggest names in the French press world are Bodum and Grosche, but how do these brands compare?

Grosche and Bodum both make excellent french press brewers. Bodum has a much wider range and slightly better quality for the money. Grosche brewers are expensive but well-made and are perfectly suited for modern kitchens. Bodum brewers are better french presses overall.

Grosche is a company that produces a very wide range of brewers. This company makes Moka Pots, Pour-over brewers, and French press brewers, along with a host of coffee accessories such as scales, and they even sell whole coffee beans. Grosche is a one-stop shop for coffee lovers, but how good are Grosche French presses? Every Grosche French press is a masterpiece and is designed to be as effective as possible while being as beautiful and well-made as possible.

Anyone who owns a Grosche French press brewer will tell you that they produce excellent coffee and are very easy to use.

Grosche has a good range of French presses that range in price and design. Everything from large, double-walled, insulated stainless steel French presses to small, 3-cup brewers with plastic components are available from Grosche.

These brewers are reliable, well-made, and sustainably produced. You cannot go wrong with a Grosche French press.

The only downside to these brewers is that they can be expensive when compared to comparable brewers from competing manufacturers. Grosche does sell some affordable models, but the best models are far more expensive than those from other brands. This company is another that is well known for producing a very wide range of coffee products and paraphernalia of very high quality and in a wide price range.

Bodum has been around for so long because the brewers that this company produces are simply very good.

The range of French press brewers from Bodum is wide and varied. The range includes everything from small, 3-cup brewers made to be as affords ale as possible and built from sustainable, heat-proof plastics, as well as very large 12-cup brewers that are made from simulated double-walled stainless steel, and even brewers that look more like a piece of modern interior design rather than a French press.

Bodum even produces a range of cold brew French presses specifically designed to make the cold brewing process as painless and effective as possible.

There is something for everyone in the Bodum French preach range, and there is a brewer that will suit every price range and every style as well.

Bodum French presses are very well made and are excellent brewers. These brewers are well-known for making very good coffee with very little sediment making it into the cup due to the high-quality filters.

These French presses are among the very best on the market, and there are few others that can even compare. If you are searching for a French press to suit your style while being of incredible quality, then look no further than Bodum french press brewers.

How Do These Brewers Compare?

Grosche and Bodum both produce some world-class coffee brewers, and the french press range from both companies is very impressive. However, in a direct comparison, there is always one manufacturer that comes out on top.

In this instance, the better French press brewer is manufactured by Bodum. The French presses from Bodum are very well made and highly effective, and there is a much wider range of brewers from this company at a much more comprehensive price range as well.

Grosche French press brewers are also very good, but the somewhat limited range in comparison to the Bodum brewers as well as the higher prices charged for brewers by Grosche mean that Bodum is the better choice overall.

With that being said, both companies produce excellent French press brewers, and if you prefer the style of Grosche or if you find a brewer on sale, then you will not be disappointed with your purchase at all.

Bodum brewers are slightly better than Grosche brewers and come in a much wider range. But take your time to find the perfect French brewer for you from either range, and you will not be disappointed. In fact, you may well find yourself excited to brew coffee every day in your beloved French press.