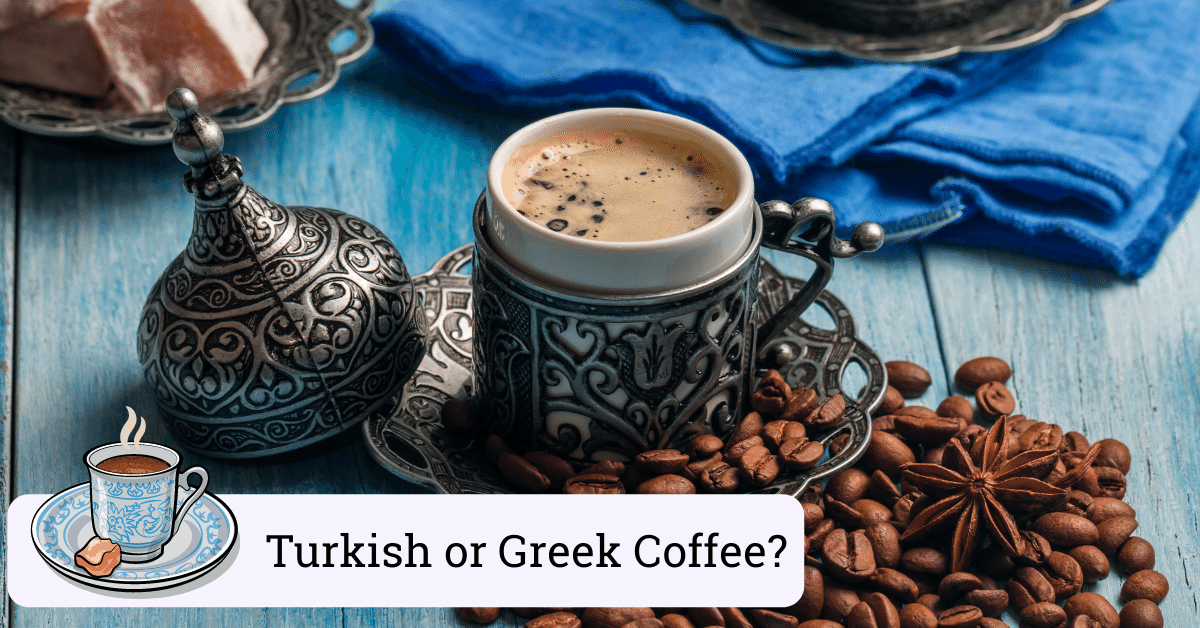 Deliciously dark, powerfully bitter, served in a tiny cup and with more silt than a pot of soil, Greek coffee and Turkish coffee are both great drinks and some of my personal favorites. But what’s the difference between them then, if they’re so similar?

Greek coffee and Turkish coffee are identical. Both are brewed by repeatedly boiling a fine coffee powder in a copper vessel, taking it off the heat whenever it foams up. The result is dark, strong, and bitter. The only significant difference between Greek and Turkish coffee is their names.

Although they might both be the same thing, both are delicious and fascinating beverages. Keep reading to find out how this coffee earned itself two different names, what its history is, and you can brew it at home. I’ll also answer some commonly asked questions about Greek and Turkish coffee, so let’s read on!

Greek Coffee And Turkish Coffee Are The Same

Greek coffee and Turkish coffee are both essentially the same drink. They’re made the same way, with the same equipment, and they taste pretty similar. The only significant difference between them is the fact that one is Greek and the other is Turkish. Other than that, though, nobody can tell them apart.

Both are brewed in a small copper pot, called a briki in Greek and, in Turkish, a cevze. Regardless of the name, however, the coffee itself is finely ground, really finely ground. Essentially, it’s a powder. It goes in the pot with some water, and then that goes on the stovetop to boil on medium heat.

You don’t just boil Greek and Turkish coffee once, though. Rather, every time it begins to foam up or boil over, you take the heat off and let the foam settle. This process is usually repeated twice, although anything up to four times isn’t unheard of.

But once you’re done boiling it, you’re left with a delightfully bitter coffee beloved across the Mediterranean. Regardless of whether its called Greek or Turkish, the end product is poured into a small cup and enjoyed.

The briki, or cevze, helps to pour it neatly, as the vessel’s bulging base traps the leftover coffee grounds and stops them getting in your drink. Nevertheless, expect some residue in Greek and Turkish coffee. Some people use it to read fortunes, and some don’t, but nobody drinks it. Just drink the coffee and then order a new cup.

If you’re interested in brewing Greek or Turkish coffee yourself, that’s doable. You can get a cevze online for less than $30, and the brewing process is very forgiving. I would recommend getting special Turkish coffee cups, though, as they bulge a little at the bottom to catch excess residue. Otherwise, espresso cups can work fine.

The Minor Differences Between Greek And Turkish Coffee

Although they are generally identical, some people say you can distinguish them. Of course, the first way to do this is to check the coffee itself. Specifically, you can look at the bag it came in. If it’s a Greek brand, it’s Greek coffee, while the opposite applies to a Turkish brand.

Greek coffees also tend towards a lighter roast, while Turkish coffee is often darker. This difference isn’t absolute, however. Its only a trend.

You can also find both served sweet, but this can sometimes be a difference between them too. Traditionally, Turkish coffee will have the sugar added directly into the cevze and boiled alongside the ground. Greek coffee adds the sugar afterward.

These differences are all superficial, though, and very minor. Indeed, you can find Turkish coffee made using a Greek brand and vice versa. Some cafes might always add the sugar afterward, or forgo the extra spice entirely.

Greek and Turkish coffee also vary slightly across their countries’ regions, so don’t expect precisely the same cup from Ankara as you would from Edirne. You can expect that Armenian, Cypriot, and Middle-Eastern coffee will all be the same thing. They’re just other names for the famous Turkish style.

The History Of Greek And Turkish Coffee

Initially, there wasn’t both Greek coffee and Turkish coffee. Instead, only the style brewed in the Ottoman Empire was the predecessor to modern Turkish nation.

The Ottomans spread this style of coffee across their territory, from Greece to Syria to Cyprus. As such, even when the empire collapsed, these regions kept brewing what they understood to be Turkish coffee.

Even in Greece, this was the case. It was only in the 1970s when the name changed from Turkish coffee to Greek coffee because of the conflicts in Cyprus. Greece renamed the coffee as a way to distance it from Turkey.

Today, however, you can still find many Greeks who refer to the drink as Turkish coffee. And, honestly, that’s fine. It is, after all, the same drink regardless of nationality.

Can I Drink Greek Coffee And Turkish Coffee With Milk?

Although some people enjoy their Greek and Turkish coffees with milk, I don’t recommend it. Because many Greeks and Turks are lactose intolerant, you won’t find the coffee served with milk or cream in Athens or Istanbul.

Also, diluting this coffee isn’t a good idea because its strength is one of its best features. If you find Greek and Turkish coffee too strong, though, rather sip it slowly, like a local.

Are Greek Coffee And Turkish Coffee High In Caffeine?

Despite their strong taste, neither Greek nor Turkish coffee is high in caffeine. They only have about 40mg of caffeine per standard serving. As such, you can drink it all day long without worrying about it. I know I do!

Is Arabic Coffee The Same As Greek And Turkish Coffee?

Although it can be similar, Arabic coffee is not the same as Greek and Turkish coffee. While the coffee served in Syria or Lebanon is often prepared the same way, it is more heavily spiced. Cardamom and saffron are both typical flavors.

However, outside of the Levant, Arabic coffee is very different. Not only are the beans usually roasted very lightly, but Peninsular Arabs boil the coffee only once and add much more spice. Arabic coffee is also served alongside sweets, traditionally dates.

To wrap this up, Greek coffee and Turkish coffee are essentially the same drink. While minor stylistic differences exist, the only significant way of telling these two styles apart is their names.

You brew both styles in a copper bot, boiling them until they foam over multiple times. As such, Greek coffee and Turkish coffee are dark, bitter, and silty. Still, you can find them served sweet also, and sometimes flavored with extra spices.

Regardless of the name, though, this is an excellent style of coffee!