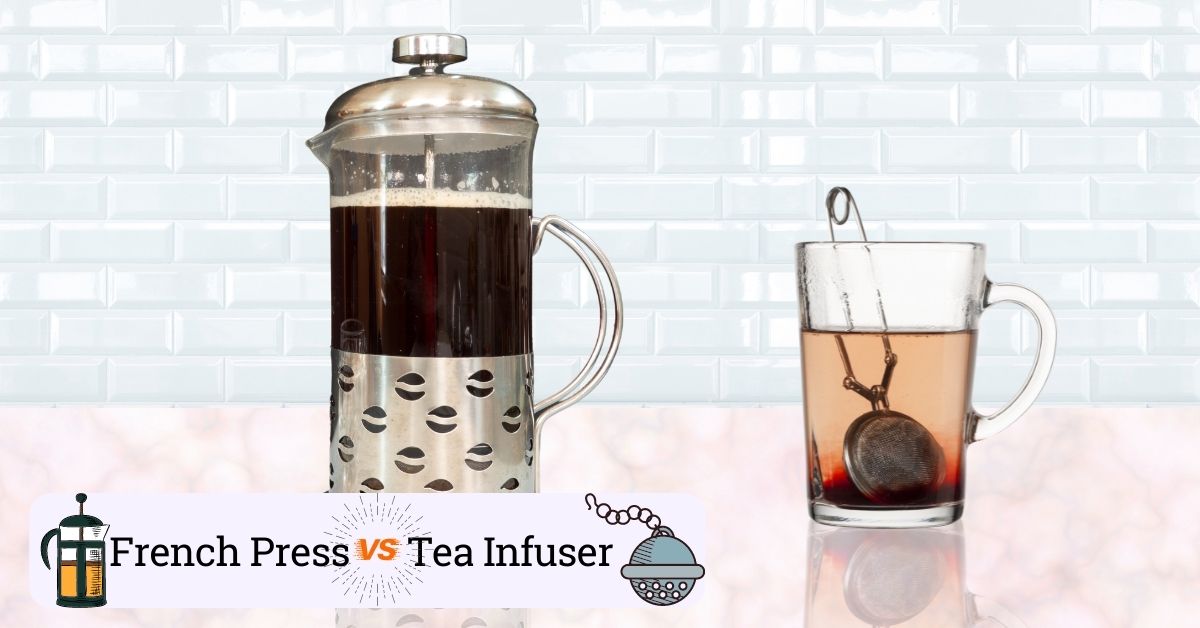 Most people are either tea drinkers or coffee drinkers. I love both. I look forward to my rich and bold caffeine fix every morning. But in the evening, there is nothing more soothing than a steaming cup of fragrant herbal tea. Anything worth having is worth making well, which got me thinking about beverage-making equipment.

A French press holds ground coffee beans and boiling water to brew the coffee. It has a handle used to pour the coffee into a mug. A tea infuser is designed to hold loose tea leaves and is placed directly into a cup of boiling water for steeping tea.

A French press and tea infuser are both used to brew beverages. But is it necessary to have both in your kitchen?

You’ve been gifted a fragrant bag of dried tea leaves, but as a coffee drinker, you only have a French Press. No problem, a French Press is quite a versatile piece of equipment and can be used for many things.

Brewing tea in a French Press is no different from brewing coffee grounds. Spoon in the tea leaves, pour in some boiling water, close the lid and allow to steep. Once the tea has brewed, press down the plunger and pour the tea into a cup.

Making coffee in a Tea Infuser is quick, easy and cleaning up is a breeze. Like brewing tea, add coffee grounds to the Tea Infuser, place in boiling water, and allow to steep. Once the coffee is brewed the way you like it, remove the Tea Infuser, add milk and sugar and enjoy.

The coffee may not taste as full-bodied as it would if you used a French Press or other coffee brewing method. But if you are in a push, a Tea Infuser does the job.

The Main Features Of A French Press

A French Press comprises two parts: the jug or beaker and the lid.

The beaker is usually made from glass and is fitted with a base and handle. Coffee and boiling water sit in the beaker to steep. Once brewed, the coffee is easily poured into a mug using the handle part of the beaker.

The lid part of the French Press is fitted with a plunger and filter. Coffee brewed with a French Press has a rich, strong body, compared to coffee that is brewed and then filtered through a paper filter. This is because a French Press has a metal filter, which fits snugly into the beaker, and lets fine particles and natural oils from the coffee pass through the filter and into your cup. A thin metal rod connects the metal filter to the plunger. The plunger is found at the top of the lid and is used to press the filter to the bottom of the beaker.

Many coffee lovers enjoy using a French Press to make their brew because it is easy to use, and you don’t need any other equipment. Just add coffee grounds and boiling water, allow to steep, and your caffeine fix is ready.

French Presses come in different sizes. You can get a French Press to make a single cup of coffee, or if you brew a pot of coffee for the whole family every morning, or if you entertain frequently, you may prefer a 3-cup, 8-cup, or 12-cup French Press.

The Main Features Of A Tea Infuser

Tea infusers became popular at the beginning of the nineteenth century.

A Tea Infuser is indispensable if you enjoy tea made with loose tea leaves. Tea Infusers hold tea leaves, allowing the flavor to infuse into the boiling water. Once the tea is brewed, simply remove the infuser. There is no need to strain or filter the tea, and you won’t find bitter bits of loose tea leaves floating around your cup either.

You can steep a single cup of tea by placing the Tea Infuser directly into a cup of boiling water. Or, to make a pot, add more dried tea leaves into the Tea Infuser and put it into a teapot.

You can also control how strong the brew is by controlling how long you leave the tea infuser in the boiling water.

There are various types of Tea Infusers, and they are made from a range of materials like metal, silicone, bamboo, and stainless steel. These are the most common ones:

If you brew one cup of tea at a time, the Tea Ball Infuser is for you. As the name suggests, the Tea Ball Infuser comprises a perforated ball on a chain. Tea leaves are placed inside the ball, which is lowered into a mug of boiling water. The chain hangs outside the mug and allows for the easy retrieval of the ball once the tea has been brewed.

This device is just like the Tea Ball Infuser but features a spring-loaded handle instead of a chain.

These often come as part of teapots and are great if you want to make a few cups of tea. Tea enthusiasts prefer Basket Infusers because they are large and allow tea leaves to expand, creating high-quality flavor.

Use Your French Press And Tea Infuser Beyond Brewing Beverages

Sure, the French Press and Tea Infuser were created for specific purposes. But they can be used for different purposes.

Tea Infusers and French Presses are both used for brewing beverages. You can make delicious cups of coffee using a simple French Press – no other fancy gadgets are necessary.

There are many Tea Infusers available, each with its advantages. While a French Press may be used to brew tea, and you can definitely brew your coffee grounds in a Tea Infuser, it is worth having both pieces of equipment in your kitchen.