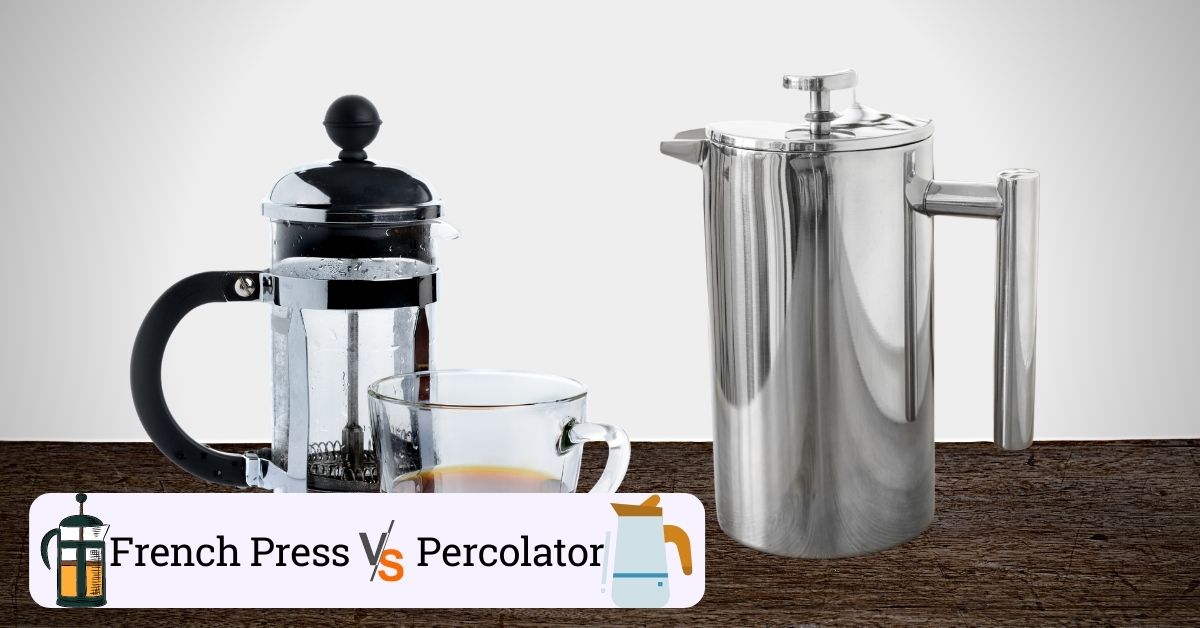 Coffee is not just a beverage. It’s an entire culture, from the different beans cultivated in far-off lands that produce different flavors to the different grinds suited to various coffee makers. The coffee shops on every corner are the lifeblood of millions of city-dwellers, but when you need your staple in your own home, which is the best option: the French press or the percolator?

Multitudes of people are not only coffee fans but depend on it to get up in the morning and function throughout the day. So you would think that it doesn’t matter which type of coffee they have as long as they get it, but this couldn’t be further from the truth. Which kind of coffee maker will satisfy these fussy coffee drinkers, and what makes it the best choice?

French Press Vs. Percolator: How They Work

The coffee percolator was invented in the 19th century. Perhaps the designs are slightly more modern, but the concept remains the same, with the water chamber at the bottom, which also stores the brewed coffee, and a perforated metal basket that holds the coffee grounds. As the water heats up, the pressure forces the hot water up the pipe in the center, flowing over the coffee.

Electrical percolators were invented in the 1920s and stayed popular until the 1970s when drip coffee machines took home coffee making to a new level. A percolator keeps sending the water through the coffee grounds, which can lead to bitter coffee.

The French press has been popular for home use for a long time because it is so easy to use and gives a delicious full-bodied flavor that isn’t easily achieved with a percolator. It has a simple design with either a glass or stainless steel brewing chamber and a plunger that has an attached mesh filter.

The coffee is brewed by immersing the coffee in hot water. The plunger is gently compressed when the brew has stood for a few minutes, separating the ground coffee from the now delicious beverage, keeping those horrid floating bits out of your cup.

Pros And Cons Of The French Press &  The Percolator

When deciding whether to buy a French press or a percolator, it’s a good idea to weigh up the pros and cons of each.

The French press could not be simpler. Scoop the coffee into the chamber, pour the boiling water over it, and allow the mix to brew, slowly pushing the plunger down to separate the grounds from the brewed coffee. The French press is easy to clean once the grounds are disposed of.

Comparing The Process and Quality Control

By simply adjusting or controlling the variables like the type of coffee, the grind size, and the timing, you can create the exact cup of coffee that you prefer with a French press. While you can control the heat with a percolator, there is no way to repeatedly adjust the temperature and the brewing time to create an identical brew every time.

The Time It Takes To Brew A Cup Of Coffee

A stovetop percolator can take up to 10 minutes to brew a decent cup of coffee. Electric varieties usually finish the cycle in about 5 minutes. The bigger the percolator urn, the longer it will take to be ready. Making coffee in a French press will produce a great cup in under 5 minutes. The coffee steeps for about 4 minutes

The Differences In Taste Between French Press & Percolator

The two methods of making coffee both require the coffee to be ground to a similarly coarse size, so you would imagine that they would produce coffee that tastes similar. However, this is not the case. Coffee from a percolator is rich and strong but has the potential to taste bitter. French press coffee is full-bodied and made according to your specifications, giving you the taste you want.

Coarse ground coffee is most suitable for a French press because it filters the coffee and prevents any grounds from sneaking into it. Percolators also use coarse ground coffee to prevent residue in the bottom of your cup. They also tend to remove a lot of solubles from the beans, leaving you with too much acidity, but the coarse grind helps a little here.

For most people, coffee is as much about the taste as it is about ingesting caffeine, so here is what you can do to get a great cup of French press coffee:

If monitored correctly, a percolator can also produce a great cup of coffee.

The French press and the percolator both have their place in home coffee brewing. Percolators are great if you regularly make coffee for many people and you either have the time to monitor it or you’re not too fussy about the taste. But if you’re looking for a delicious, aromatic cup every time, the French press is your best bet.