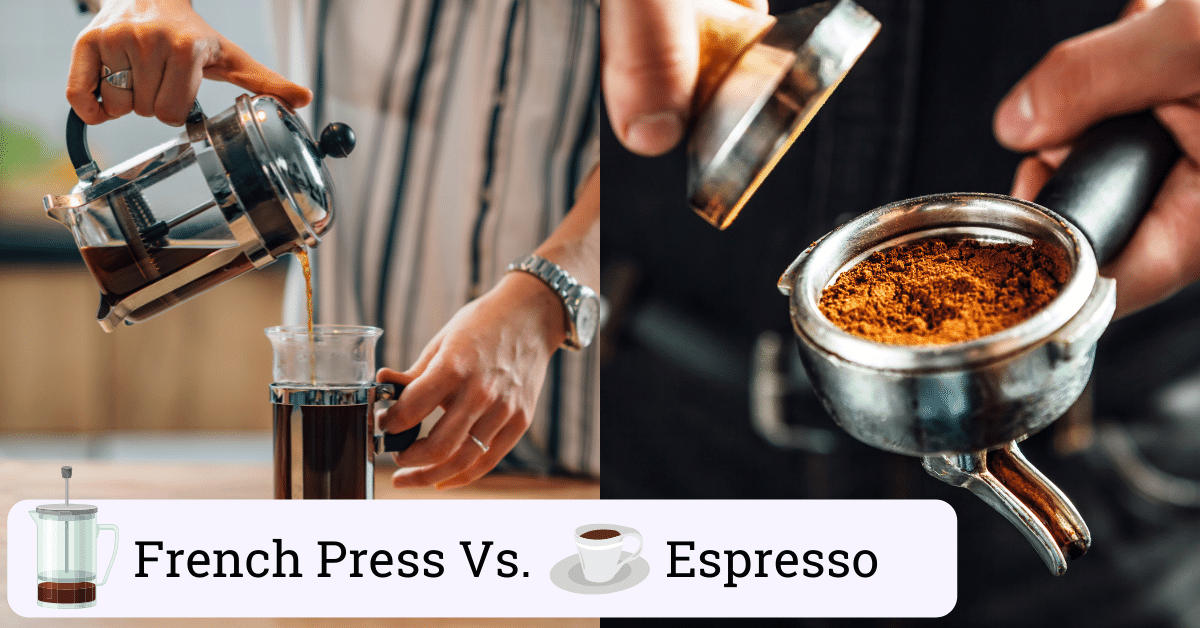 Espresso and French Press coffee are two different forms of brews that are delicious and easy to prepare. French Press and Espresso are popular, traditional, and very fundamental methods of coffee brewing. However, there are undeniable differences in the taste, caffeine content, and other factors which influence my decision for a shot of Espresso or a cup of French Press coffee.

When determining the differences between French Press and Espresso coffee, it’s good to analyze what every brewing method entails and how long it takes to make a perfect cuppa.

Espresso is a brew with an espresso machine that forces hot water through a puck of ground coffee using a pump. On the other hand, French Press makes coffee by immersing the coffee grounds in boiling water, then set aside to steep for a while; and separated from the grounds using a plunger and poured into a cup.

Making French Press coffee requires coarse coffee grinds while Espresso is made better with fine grounds, which I consider during extraction. Fine coffee grounds permit maximum extraction over a short period, so when making Espresso, coarse grinds are likely to make a bland cup of coffee and clog up the coffee machine’s gear.

The French Press has a mesh filter that isn’t as fine as an espresso’s, which results in a muddy and undesirable final brew when I use fine grinds of coffee. The extraction process of a French Press is also comparatively long, so fine coffee grinds result in bitter brews.

The serving sizes for both French Press and Espresso depend on the type of equipment you have at hand. An average French Press holds between 3 to 12 cups of coffee and sometimes more. An espresso maker gets me a single serving of two cups simultaneously, and if I brew a full carafe pot, I am assured of 12 cuppas at once.

I like espresso machines for their fast operation because, with them, I can make a single-serve cup of coffee in 25-30 seconds. Even better, there are semi-automatic espresso machines that can be programmed for a quicker job.

Using a carafe coffee maker, I can fill up a coffee pot in less than 2 minutes, with the help of a 12-bar pump for extraction of flavourful coffee in a limited time.

A French Press machine requires the coffee grinds to be steeped in boiling water for at least 5 minutes, during which I move the plunger up and down to facilitate the process.

When brewing my coffee, I always use clear, clean water to avoid the undesirable aftertaste and smell regardless of the method I choose.

The water temperature varies with every brewing method, with the perfect temperature for an espresso cup being 90-96 degrees Celsius and a French Press about 200 degrees F.

Most espresso machines are pre-set for the standard water temperature, and there are some French Press kettles with programmable settings to make things easier.

The caffeine content in Espresso and a French press coffee is influenced by factors like the coffee blend, the roast, and the extraction or steeping time used.

One shot of Espresso contains between 29 to 100mg per serving, while that of a French Press is between 80-135mg of caffeine per cuppa.

The amount of caffeine is lower when I use decaffeinated beans, which is a good way to enjoy a cup of coffee in the evening.

Any good-tasting coffee is influenced by choosing the right blend, roast, and grind, and the brewing method also plays a vital role in the final brew taste.

Espresso coffee is made using fine grounds, and pressure is used to extract maximum flavor quickly, but this affects the balance. When I use very fine grinds or darker roasts, there is over-extraction of caffeine, resulting in a fragile brew with a bitter taste.

I recommend a lighter roast and medium grind for first-time espresso users as it permits me to brew the coffee to my taste and preferences. I use a coarse grind for a French Press that doesn’t need steeping pressure to use darker roasts for a more intense and richer flavor. It’s also possible to steak the steeping time for various blends and roasts, but generally, the French Press guarantees a more flavourful and delicious cuppa.

French Press and Espresso are unarguably two of the most popular methods of coffee brewing, and all avid coffee enthusiasts know the differences between them.

The French Press offers a very practical way of brewing coffee, where I add boiling water to the ground coffee, plunge, and allow it to be steep. It gives me control over the brewing process because I am physically present to decide how hot I want the coffee and the time to let it steep.

Espresso forms the basis of various coffee-based drinks, which is why every coffee house has an espresso machine to produce delicious, mouth-watering, and fresh aromatic coffee. There are some situations where I prefer using an espresso machine over a French Press, such as;

When in a hurry

An espresso machine is fast, and it brews an ideal, perfect cuppa in 25-30 seconds which is suitable for my hasty cold mornings.

There are also programmable espresso devices with an automatic timer, so you don’t have to do anything during the process. As the machine can only make a shot or two at a time, I don’t use my espresso machine for multiple drinks as it’s time-consuming and tedious.

Espresso is high in caffeine content, so it’s likely to give me the boost and vigor I need to start the day off faster than French Press coffee.

If you love experimenting with your beverage as I do, Espresso is just right. There are so many ways to enjoy a cup of coffee today for espresso-based beverages.

Espressos’ high oil and caffeine content make them suitable as a base for several drinks, including; latte, mocha, cappuccino, macchiato, iced coffee, and RAF, among others.

If you are a coffee lover, you must often be fascinated by the aesthetic coffee pictures with latte art. You can only make such with an espresso machine as it runs hot water with a lot of pressure through the coffee grounds.

The crema made from Espresso is what baristas use to make the latte art, so an espresso machine is ideal for this purpose. The French Press has a mechanism that doesn’t allow it to make this thick cream layer. A French Press only makes a single type of brew, which is nothing compared to the many variations of Espresso.

Espresso is delicious, even without additives, and it has high caffeine levels, which makes it ideal for making a variety of coffee drinks with regular, frothed, or steamed milk or cream.

Espresso is a key ingredient for these drinks, especially when they have an option for steaming milk. This is strong, concentrated black coffee, which is a preference for a couple of coffee enthusiasts.

French Press coffee has its fair share of advantages. A French Press is an ideal alternative to pour-over coffee, instant coffee, and drip coffee makers. I use it to make a regular cuppa and not for mixed coffee drinks and espressos.

The French Press is meant for lighter roasts and Arabica beans, but regardless of the bean type and roast I use, I have assured a dark roast that amplifies the beans’ caramel notes for a fruity and floral taste. I prefer a French Press brew for the following reasons;

When making large quantities of coffee for a group of coffee lovers, a French Press comes in handy.

The French Press brews up to 1 cup of coffee at an instant, and it’s ideal for use with a carafe pot or a coffee maker. When I have friends and company, I take out my French Press to make a cuppa for everyone, and the convenience is bewildering.

French Press coffee is made by steeping coffee grinds in boiling water for a couple of minutes, which is to say that the coffee brew is likely to have a more full-bodied taste.

The French Press uses an immersion brewing method which accounts for more aroma and flavor in the coffee and a richer final brew taste.

The amount of caffeine in French Press coffee is double that in espressos due to the steeping time. The 30 seconds used for brewing espressos are barely enough to extract more caffeine, while for the French Press, 4 minutes are enough to release all the caffeine and oils from the grounds.

Unlike espresso machines, the French Press is quite low-maintenance. It is easy to clean and maintain, as long as it’s stored clean after every use. Some parts are safe to wash in the dishwasher, which makes things easier.

A French Press is preferred over an espresso machine due to its speed in producing large volumes of coffee.

Even though espresso machines make stronger and richer coffee, the coffee is in small quantities, which may not be convenient when I have a social gathering and need to serve multiple cuppas in a single sitting.

A French Press is also comparatively cheaper than an espresso machine. On the other hand, espresso machines are quite costly and even more based on their automation and consistency of use.

French Press coffee is also customizable to suit different taste preferences, which means I can add cream, milk, and sugar to enhance the taste of my coffee as I do with espresso shots. It produces a deep, strong flavor, especially when I use coarser grinds.

One of the biggest conveniences and advantages of the French Press is that it’s easy to use as the components needed to make coffee are simple. The French Press is easily portable, so I can clean it up and pack for a hiking trip or a day outdoors after use.

A French Press uses large filters to prevent large coffee grounds from seeping through to the final brew, allowing natural oils and sediments to pass through. As such, the resulting coffee will be flavourful but otherwise very unhealthy due to cholesterol levels.

Factors to consider when buying an espresso or a French Press

Brewing coffee can have different results, depending on the method used, the type of beans, amount of water, among other things. French Press and Espresso are cornerstone brewing methods popular to most coffee pros if you are new to coffee brewing.

All coffee enthusiasts and budding home baristas need to understand the difference between French Press and espresso coffee. Either is applicable, depending on your personal preferences, budget, and how much time you have for the brewing and extraction process.

Whatever you decide to go with, both Espresso and French Press offer a complex, deep and rich flavor in strong and effective black coffee cuppas.