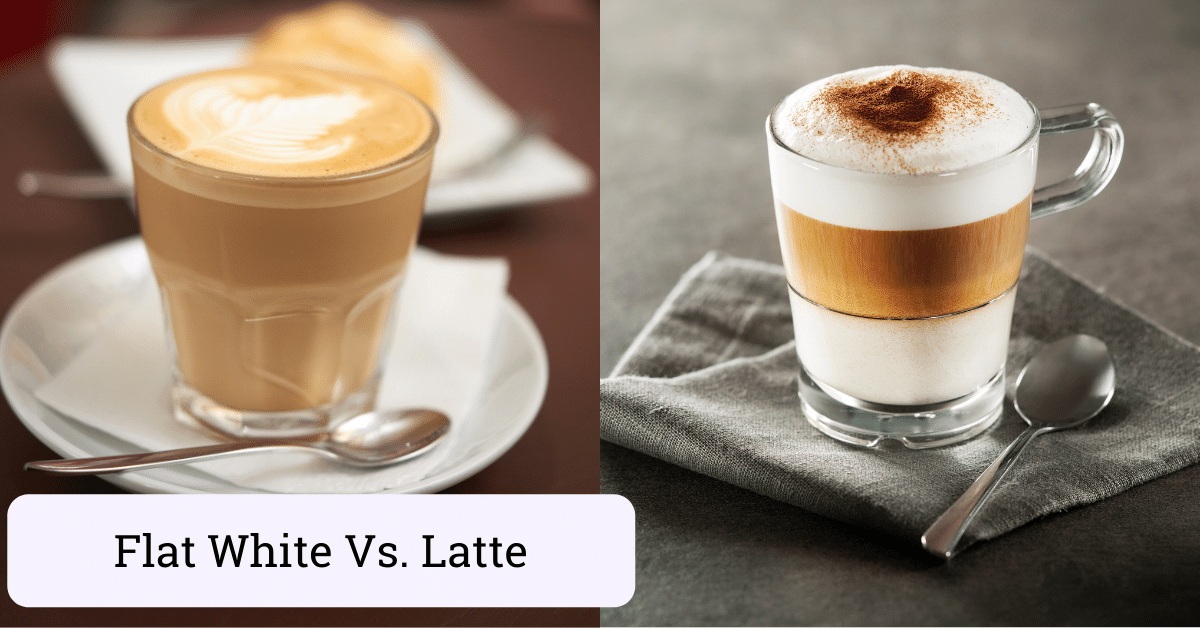 There is some confusion about the Flat White and the Latte. On a menu, these drinks appear to be very similar, but are there any significant differences between them?

The Flat White is an espresso-based drink with milk that originates from Australia and New Zealand.

This drink is the most popular drink in coffee shops in both of these nations and has increased in popularity throughout the world since its invention.

The standard Flat White is prepared with two shots of espresso or ristretto and silky-smooth steamed milk. The textured milk is the key to the Flat White, as this drink is not made with any foam.

The lack of foam is what separates the Flat White from most other espresso-based drinks.

Another defining feature of the Flat White is that it is typically a smaller drink than other drinks of this type. The Flat White is smaller than both the Cappuccino and the Latte.

This double-shot of espresso, and the textured milk is what creates the signature flavor profile and drinking experience of the Flat White. The milk is smooth and sweet, which balances the strong espresso, but the double shot still makes this drink very heavily biased toward the coffee flavor.

This allows the full taste of the espresso to be enjoyed by the drinker, while the milk slightly mellows out the harsh flavors and makes the Flat White smooth to drink.

The size of this drink, the particular milk, and the double shot of espresso that is used to make it are the three most defining features of the Flat White.

The Caffe Latte is among the most popular espresso-based drinks internationally. This drink is an Italian breakfast coffee drink that is designed to be strong but also is easy to drink.

The Latte has been popular for many years and is one of the most widely enjoyed and widely varied coffee drinks.

The recipe of this drink tends to vary depending on the coffee shot and the barista who prepares the Latte.

However, with that being said, the Latte itself is always made in a similar way.

The modern Latte is one or two shots of espresso depending on its size, but the traditional recipe calls for a double-shot. It is served with a thick layer of textured milk and sometimes with a cap of milk foam atop the drink.

The Latte is often served in a large glass rather than a ceramic mug. The clear glass has given rise to the growing trend that is the Layered Latte, in which the various ingredients of the drink are poured in such a way that they form visible layers within the clear glass.

A standard Latte is made with two shots of espresso, usually about 2oz (60ml), and the rest of the glass is filled up with textured milk and milk foam. The head of foam is usually quite thick, and most baristas require this head to be at least 1cm (0.4 inches) deep.

The Latte is the source of Latte art which has come to be a standard in all coffee shops. The milk that is made for the Latte is the ideal consistency for making the Latte art, which is why said art originates from this drink.

What Are The Main Differences Between These Drinks?

The Flat White and the Latte are similar in a few ways, and this causes much confusion when it comes to ordering these drinks based on personal coffee preferences.

It’s time to clear up the haze and define the differences between these drinks once and for all so that you can make the best choice for your day when ordering or making your coffee.

The main differences between the Flat White and the Latte are:

Milk is one of the most important differences between the Flat White and the Latte. The milk in a Flat White is smooth, textured, and described as microfoam due to the incredibly tiny size of the bubbles in the milk.

The milk that is made for a Flat White must be incredibly smooth. The way the milk is poured is also different. The Flat White milk pour must intermingle with the espresso crema and not completely dissolve it.

This leads to the flat brown surface of the drink that gives it its name.

The size of these two drinks is significantly different.

The Flat White is typically a smaller drink, as most baristas prepare them to be no more than 6oz in total volume.

The Latte is typically made to be between 7 and 10 ounces, while some coffee shops serve their Lattes in sizes up to 16oz.

A large Flat White is considered a Latte, so the Flat White must be less than 6oz in total volume to be a true Flat White.

The last notable difference between these drinks is the variations that are available for each of them.

The Flat White has no notable variations. This drink is set as a double shot of espresso mixed with smooth textured milk with no foam, served in a small or regular-sized ceramic mug.

However, the Latte has many variations. Lattes can be served hot or cold, layered or unlayered. There are several size variations, they can be made with single or double espresso, and the type of mug or glass that is used is entirely optional.

The Latte has more variations because it has been around for longer, but the Flat White is a particular drink for people who enjoy their coffee a certain way.

The Flat White and the Latte are relatively similar drinks, but there are some fundamental differences that set them apart.

Both drinks are enjoyed by coffee lovers throughout the world. Take the time to try both types of coffee to decide which you prefer, and don’t be afraid to try some Latte variations!