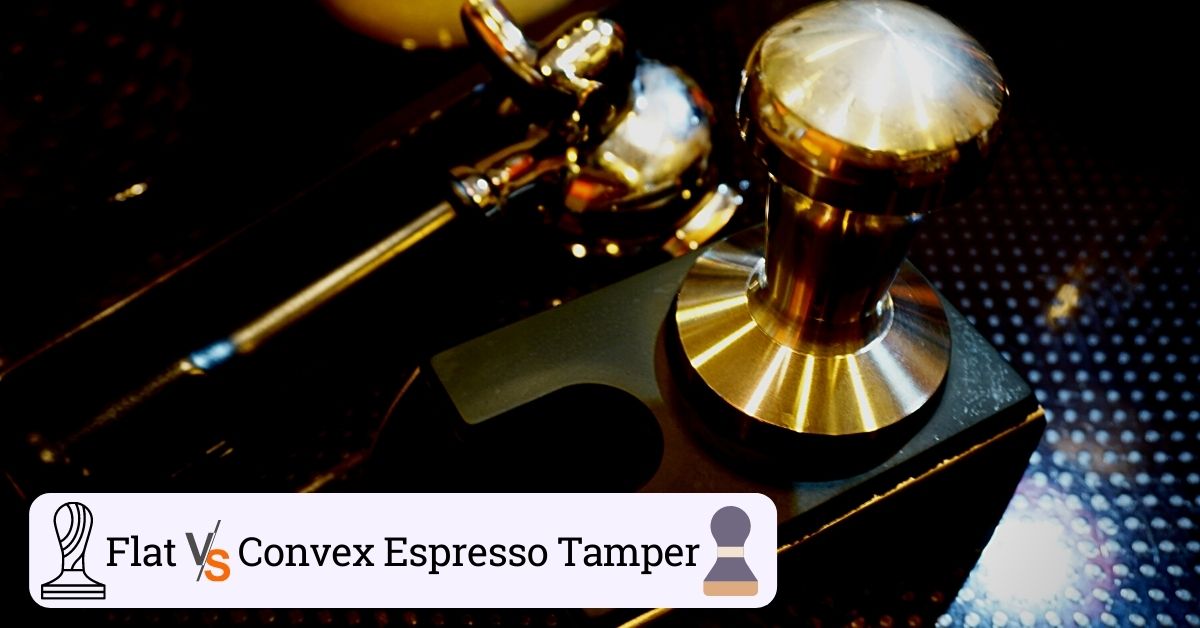 The tamper is one of the most important tools for brewing espresso. Without a good quality tamper, it is impossible to properly compress a puck of finely ground coffee to the ideal density for properly brewing espresso. However, there are several types of espresso tampers available. Two of which are flat and convex tampers. How do these tampers compare?

Flat tampers create an even, flat puck when used to compress coffee in a portafilter basket. Convex tampers create more compression at the center of the puck, creating uneven extraction, but they create a better seal, which means they are better if the tamper is too small for the basket.

Flat and convex tampers are both useful, but there are some unique attributes of both tamper types that must be considered. Without proper puck prep, the espresso will not taste as good as it should, and the tamper is a vital aspect of the process. Let’s learn more about flat and convex espresso tamers to better compare them to one another.

The tamper that a barista uses for preparing a puck of ground coffee for espresso is vital. The tamper determines how much pressure can be applied to the coffee and how evenly the pressure is applied to compress the puck to the ideal density for generating the correct resistance of flow when brewing the coffee.

An espresso tamper with a flat base is the best way to compress ground coffee as even as possible, but it is the most difficult type of tamper to use correctly. A flat tamper is easily misaligned and can result in a tilted coffee puck, which will, in turn, result in poorly extracted coffee.

However, if the flat espresso tamper is used well, it provides the most evenly compressed puck of ground coffee within the portafilter basket and the most uniform flat surface of the coffee puck.

These factors mean that this espresso tamper typically provides the best, most well extracted, most even tasting espresso. Other tamper struggle to match the even extraction possibilities provided by a well-made flat base espresso tamper.

While this tamper style is the most widely used and generally considered to be superior to other tamper designs, there are some disadvantages to this tamper as well. Let us examine some of the important pros and cons of using a flat base espresso tamper.

Pros And Cons Of The Flat Espresso Tamper

The pros of flat base espresso tamper include:

The cons of flat base espresso tampers include:

While the flat base espresso tamper is the most widely used tamper among all baristas, there are several other types of espresso tampers available today.

One such tamper style is the convex base espresso tamper. This is the second most widely used espresso tamper, and it can be very useful in certain circumstances.

The base of this tamper, the area of the tamper that is pressed into the coffee to compress it, has a convex shape rather than being flat. This means that the center of the tamper base is raised and tapers down toward the edges.

When compressing a puck of ground with a convex espresso tamper, the center of the puck experiences more pressure than the outer edges of the puck. This causes the coffee to be pushed down in the center and up and out towards the rim of the portafilter basket.

The purpose of this tamper design is to create a better seal between the edge of the coffee and the inner rim of the portafilter basket, allowing for a more even flow rate through the coffee.

This tamper does create an effective seal in this way, but there are drawbacks to this style of tamper as well. One such drawback is the fact that while there is a better seal, the top surface of the coffee puck is not smooth and flat, and the center is more compressed than the edges.

This means that the coffee puck is not compressed evenly, which typically results in uneven coffee extraction, which leads to disappointing espresso.

With that being said, if the tamper is made well, it can still be effective in the right circumstances. Let us examine some of the important pros and cons of using a convex base espresso tamper.

Pros And Cons Of The Convex Espresso Tamper

The pros of convex base espresso tampers include:

The cons of convex base espresso tampers include:

Flat espresso tampers are the best tampers to use. There is a variety of flat base tampers for all portafilter basket sizes, and they are available at all price points and build-quality.

Flat tampers that are made well and used by experienced hands create a flat and evenly compressed espresso puck that is ideal for brewing espresso and ceases the coffee to extract evenly.

Convex espresso tampers do not create even pucks, and thus the espresso does not extract evenly. This means that flat tampers are usually the best for most espresso setups.