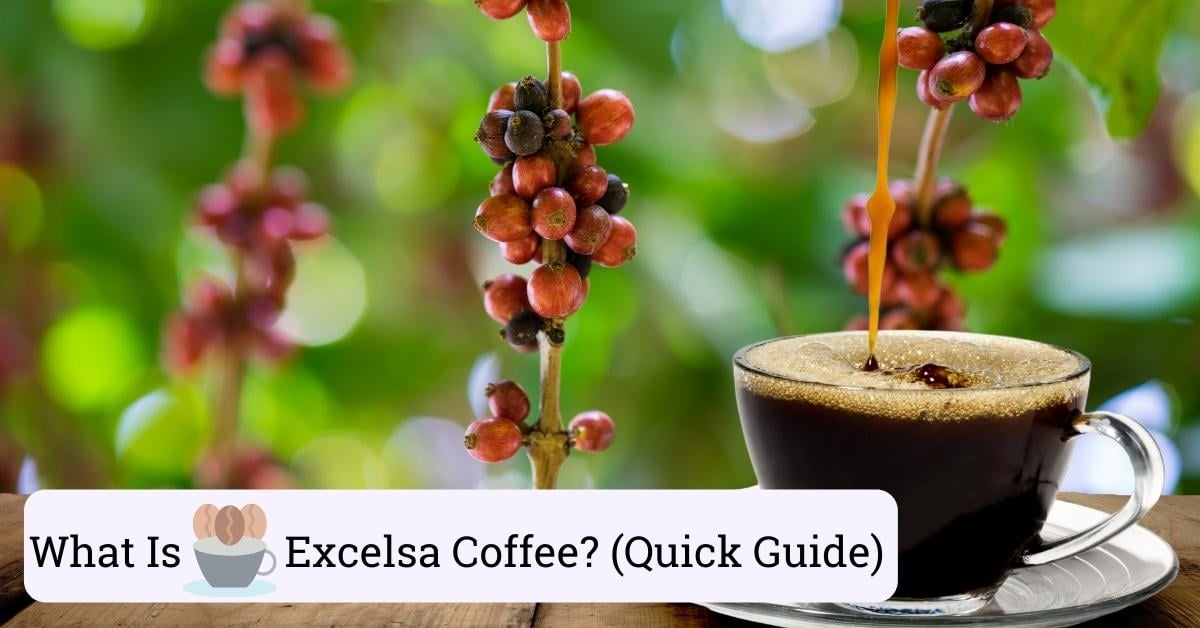 While terms like “Arabica” and “Robusta” are pretty common words to hear when any discussion about coffee is being had, one of the lesser-known terms in the coffee world is Excelsa coffee. This coffee variety is extremely rare, and as a result, difficult to find.

Excelsa coffee is a rare variety of coffee which originated in Africa but is grown mostly in Southeast Asia today. This unique bean variety makes up around 1% of the global coffee market, and it belongs to the Liberica family of coffee plants. The coffee itself has an extremely strong aroma.

What makes excelsa coffee different from other varieties of coffee? Why is it so rare? Where can it be found, and how much does it cost? Read on to find out the answers to these questions, and more about this somewhat exciting and interesting variety of coffee.

What is Excelsa Coffee?

Excelsa coffee is a rare variety of coffee, originally discovered in Africa around the year 1904. This is an extremely resilient species of the coffee plant, but it has an exceptionally small footprint in the global market of coffee.

Excelsa coffee was previously thought to be a species of its own, but in 2006 it was discovered to be part of the Liberica family of coffee plants. It has a similar bean shape to Liberica, but it still possesses a number of its own unique characteristics.

Excelsa plants are grown around Lake Chad, in Chad, as well as in Sierra Leone, Liberia, Central African Republic, Vietnam, the Philippines, and Indonesia.

Because relatively little is known about this type of coffee, the result is that it is often not cultivated, roasted, or processed correctly. Because of this, the coffee that is made from it is often of low quality with few distinct flavor characteristics.

However, if it is processed correctly, excelsa beans can produce delicious coffee with unique flavors.

The plant is able to grow in extremely dry soil and does not need large amounts of water in order to grow successfully. It possesses extremely sturdy growth, despite extremely barren conditions, and it grows to over 10m tall, making it one of the tallest coffee plants in the world.

Excelsa coffee was originally discovered in 1903 in Central Africa. Here it was also known by its scientific name of Coffea dewevrei. In 2006, however, the Excelsa coffee variety was reclassified as a variety of the Liberica species, namely dewevrei.

This has led to widespread confusion over the definition of this coffee, which in turn has resulted in a lack of reliable data about its production. It’s also highly plausible that this has in turn led to the dropping quality levels of Excelsa coffee.

As a result, there is far less incentive for farmers to implement strict measures for quality control. Overall, there are no official stats regarding excelsa coffee’s trade or production, and it has been established that the demand for this coffee is not considered “commercially significant.”

Excelsa trees can grow over 15 meters tall, and the diameter of the canopy can be anywhere between 6m and 7m. Due to their high growth rate, these trees must be pruned with relative frequency, and this can prove difficult to do at such extreme heights.

As a result of this, extra labor is required, and so the costs of production are sent even higher. Another factor is that the ripening period of Excelsa coffee plants is exceptionally lengthy, lasting anywhere between a year and 14 months.

This extended period of ripening contributes further to high production costs, and as a result, farmers have a difficult time implementing any sort of cultivation plan. Added to this is the fact that there is very little research into Excelsa coffee and the improvement of its cultivars.

Knowledge of this coffee is usually shared on a generational basis, with expertise passed down from one generation to the next. As a result, there is no properly established knowledge base or body of research that allows for consistent production.

Despite being classified as a liberica variety, excelsa coffee still possesses its own individual characteristics, and there are distinct differences between the two. The physical differences lie in the shape of the bean itself.

Liberica beans possess an almond-like shape, while excelsa beans have a small, more round shape. Despite this, the debate continues over whether excelsa is a species in its own right or a variety of the Liberica bean.

The reason for this debate stems in large part from a series of genetic studies of the two plant varieties which yielded opposing results. These studies showed enormous differences in the genetic makeup of the two plants, further sparking the debate that they should in fact be classified as two separate species.

Excelsa coffee trees are inherently better able to resist the majority of diseases which commonly kill other plants, including the infamous coffee leaf rust.

Coffee leaf rust is a disease which wiped out the vast population of arabica plants across the world, and this is when the liberica plant was introduced as a replacement for the enormous population of plants that was lost.

Excelsa coffee has a rather unique taste and flavor profile. This coffee is said to boast certain traits of light roast coffees, such as a certain degree of tartness, and hints of fruit. In contrast to this, excelsa manages to simultaneously show flavors usually seen in dark roasts.

Excelsa coffee is lower in caffeine than its arabica and robusta counterparts and has a lighter aroma, but somehow manages to retain an extremely deep flavor profile. This makes for a rather unique coffee experience that has recently become more popular and sought after by enthusiasts of coffee.

Excelsa coffee is also used frequently in blends to create a more interesting flavor. It is often used to improve the middle – and back – palate, creating a more substantial and powerful flavor which lingers in your mouth.

While the debate is ongoing as to the classification of excelsa coffee, you can rest assured that this rare coffee is indeed a unique find, and if you are lucky enough to get your hands on some, you should ensure that you prepare it properly so that you can enjoy everything the coffee has to offer.