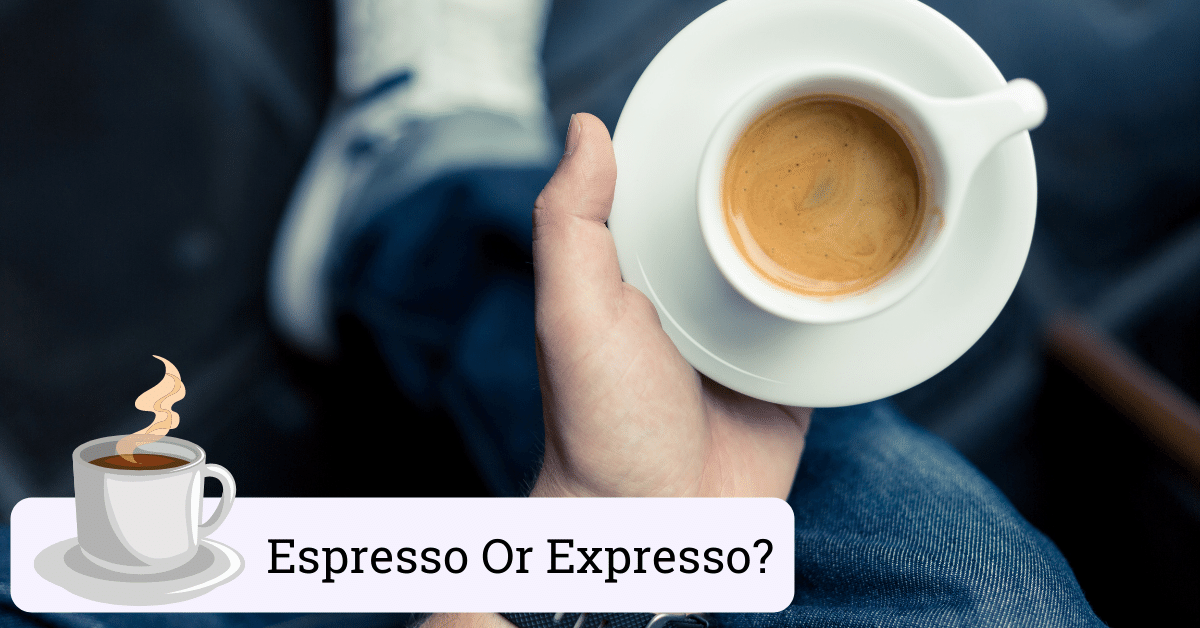 Have you ever been in that awkward position before where a waiter asked what you’d like to drink, and you’re not sure whether you should respond with “espresso” or “expresso?” Maybe you’ve used both on different occasions, and you’re still not sure which one is correct. So, is one of them a spelling mistake, or do these two words refer to completely different things?

Espresso is an Italian word that refers to brewing coffee by “pressing” steam or hot water through finely-grained coffee. However, In English, the word “express” has similar characteristics to “pressing,” and both are terms used since the 1900s to refer to the produced coffee.

However, Expressing and pressing have entirely different meanings in the English and Italian dialects, so where did the confusion start? Was “expresso” originally just a typo that the author tried to justify? Or maybe it was a deliberate novelty language creation to give the coffee a new and improved edge. Uncovering the truth behind it might require a lot of expre..? espre…? Coffee!

Espresso refers to thick, strong coffee, usually served in a small shot-like cup, which is made by pressing hot water through the grounded beans to produce a highly concentrated brew. Espresso is the core ingredient to all the popular coffee drinks in America, such as caffè latte, caffè macchiato, and the caffè mocha; however, the word is not an original English word.

Like many words in the English language, espresso is of Italian descent and is used in English as its original form. To find the origin of this word, we should first delve into the history of the process. This pressed-out method of producing coffee dates back to 1884 when Angelo Moriondo was given the patent for a machine that could instantly make a coffee beverage.

The term ” espresso ” became more popular only when the aforementioned device was refined by Desiderio Pavoni & Luigi Bezzera. Fast forward to the 20th century, and you have an owner named Achille Gaggia, who was credited for creating the first mass-produced espresso machine that was market-friendly.

Around this time, the word “espresso” became a well-used name among native English speakers. It was often used to refer to the machine itself or the establishment where one could find coffee produced by this machine. The term was also later used in books like “The Magic Barrel, 1958” and “Robinson, 1958” to refer to coffee.

Espresso was, therefore, a household name often assumed to refer to the method of creating coffee, which is to press hot water through grounded coffee, but the word “espresso” also referred to Italian restaurants that could concoct a coffee with relative ease and, more specifically, speed. This is the start of the adapted and modified wordplay.

Though believed to be a new term, expresso has been around since the 1960s and mentioned by a few to be inspired by French pronunciation and usage. However, there is profoundly rooted reasoning as to why expresso is used as an alternative to espresso.

Espresso was often used to refer to the nature of the method (grounds being pressed-out) due to the general belief that espresso is the past participle of the word “esprimere,” which derives from the Latin word “Exprimere.” However, “exprimere” is one of the original words where “express” is derived from and means to “press or squeeze out” in Latin.

Therefore, it can be said that the word Express also accurately depicts the method of producing coffee which directly refers to squeezing out the coffee by applying pressure to the grounds. So, why do some consider expresso to be an incorrect usage if they have similar qualities in language?

Since espresso was the original word referring to the type of coffee, deviations from the term were not generally expected as accurate or correct. However, espresso seldom referred to coffee being pressed and more commonly referred to how quickly they were made compared to percolators.

It seems like there is a general confusion regarding what the original words meant and whether the two words in question are right or wrong. What we do know is that although the word espresso refers to coffee being pressed, the word itself does not mean “to press.” On the other hand, Express does refer to applying pressure as well as its more common usage, “putting into words.”

Whichever way we look at it, it seems that expresso has strong and substantial roots in its usage referring to coffee, although it is not the original word used to refer to coffee.

Which one should I use, “Expresso” or “espresso?”

First, espresso and expresso refer to the thick, strong coffee used to concoct caffès and other coffee cocktails so; whether you say you’d like espresso or expresso, you are guaranteed to receive a freshly brewed cup of caffeine bliss.

However, espresso seems to be the preference among coffee experts and purists because the word is still associated with the original machine and production method. On the other hand, expresso has been used to refer to TV shows and even new and improved coffee shops with a slight deviation from the traditional “caffès.”

It seems that the word expresso is more often used as novelty language to refer to different things related to coffee. In contrast, espresso is still the standard and accepted term to refer to the coffee itself.

To espresso or not to expresso, that is the question, and the answer seems to depend on whether you’d like to use the traditional form or the revised rebel version. Still, it is essential to note that most restaurants and caffès do use the conventional term on their menus.

Although this topic does make for an interesting debate regarding the importance of words and the meaning we assign to them, the consensus is that espresso is the more traditional and everyday usage. However, expresso has profoundly impacted the coffee enthusiast, and there are reasonable explanations as to why one would prefer to use it.