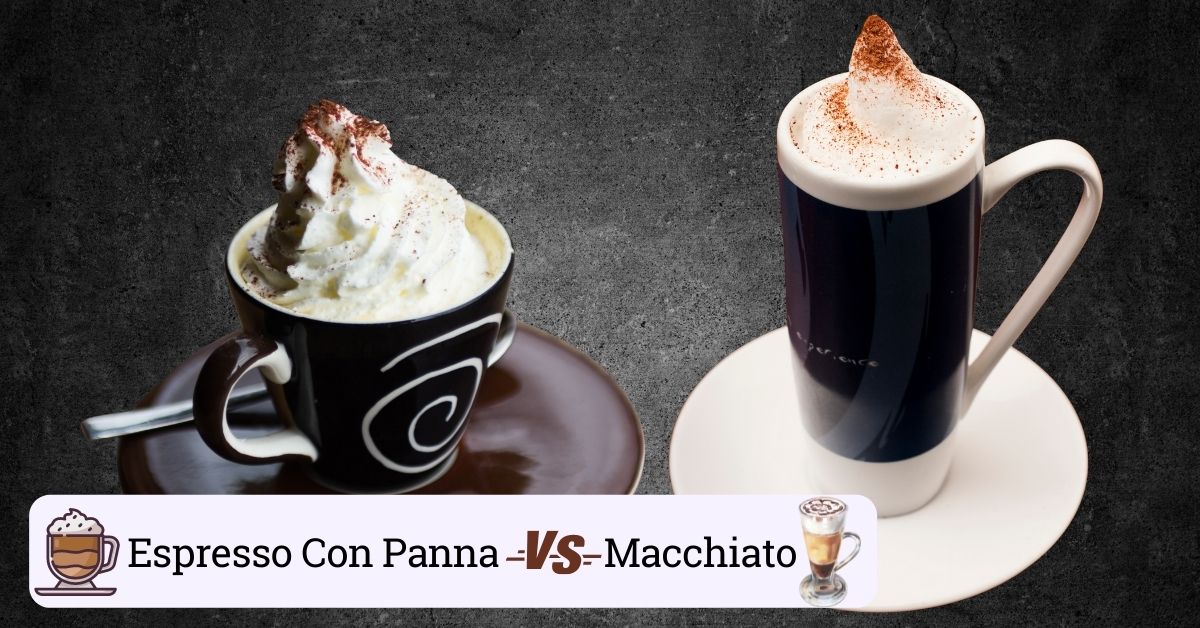 Espresso is among the most versatile coffee drinks out there. This small strong coffee is used as the base of many other fantastic drinks, and the Macchiato and Espresso Con Panna are two of the most iconic espresso-based drinks in history. Let’s learn about these drinks and find out what sets them apart from each other.

The Espresso Con Panna and the Macchiato are two of the most well-known and widely enjoyed espresso-based drinks internationally. Both of these drinks have a rich history and are a favorite among coffee lovers everywhere. However, the differences between these drinks are substantial, and they should not be confused with one another.

The Espresso Con Panna is one of those espresso drinks that has slowly faded out of the general public eye over the years, but it remains a beloved beverage among a small number of coffee enthusiasts. However, recent years have seen this drink surge in popularity again.

This unique espresso-based drink is the source of confusion for many coffee lovers, so it’s time that we clear away the fog and misconceptions that surround the Espresso Con Panna.

Modern versions can be made with double espresso, but the amount of cream used typically remains the same so as not to overwhelm the espresso. These drinks are served in double espresso cups.

The modern version of Espresso Con Panna has given rise to many decadent versions of the drink, which are made much larger and use various recipes. One such recipe known as the Café Vienna is a large drink served in a Latté glass, consisting of two shots of espresso, steamed milk, and a serving of whipped cream on top.

The Macchiato is a drink that has confused many coffee lovers in recent years, simply due to the vast number of variations and recipe deviations that have found their way under the Macchiato name.

However, the Macchiato is another traditional espresso-based drink from Italy that should be made according to a defined recipe to be called a true Macchiato. That is not to say that the modern variations of this drink are not delicious, only that the true Macchiato is not something that can be changed so easily.

Let’s explore the original Macchiato recipe and the modern variations to set them apart from one another and to clarify the definition of the Macchiato vs. the Espresso Con Panna.

The original Macchiato recipe came about to differentiate espresso with and without milk. Espresso shots with thick crema can hide the contents of the drink, which means that it can be impossible to tell by just looking into the cup if an espresso has some milk in it or not.

To solve this issue, baristas mark the espresso with milk with a dot of milk foam, hence the name Macchiato, which directly means ‘marked.’

Thus, the standard recipe for the traditional Macchiato is simple. A single shot of espresso with a very small amount of milk to temper the intense flavor and a tiny drop of milk foam on top to mark the drink.

In modern times, however, there are several versions of the modern Macchiato, including the Starbucks versions that are strong Cappuccinos with flavored syrups and toppings.

The modern version of this coffee drink is less intense, far larger, and has much more milk. These drinks are often served with foam as well and have come to be synonymous with toppings, flavors, and iced espresso drinks.

There are many varieties of Macchiato available now, so if you seek the original, be sure to visit a café that serves traditional espresso-based drinks rather than modern spiced and flavored versions in large cups.

How Do These Drinks Compare

Comparing the Espresso Con Panna and the Macchiato is somewhat straightforward, as the dairy used in each drink makes them very different from one another.

The Macchiato is a very strong, intense-tasting drink that is designed to highlight the strong espresso and present this strong flavor first and use a small amount of milk to mitigate the intensity of the drink. It is a small, espresso-forward, very strong drink.

The Espresso Con Panna is less intense to drink due to the fattiness of the cream that is used in the drink. The cream heavily mitigates the intensity of the espresso in the drink, but it also adds a lot of texture to the drink as well.

This drink is smooth, rich, and has a very heavy mouthfeel, while the Macchiato is much lighter, far less dense, and typically stronger.

The Espresso Con Panna and the macchiato are both iconic yet very underrated drinks. These drinks both highlight the joy of espresso while adding richness, texture, and some sweetness to the beverage in a delightful way.

The way to know which drink you prefer is to try them for yourself, only be sure to order the drinks in a café that serves traditional espresso-based drinks, or you may be met with a surprise when you receive a flavored, iced beverage label a Macchiato.