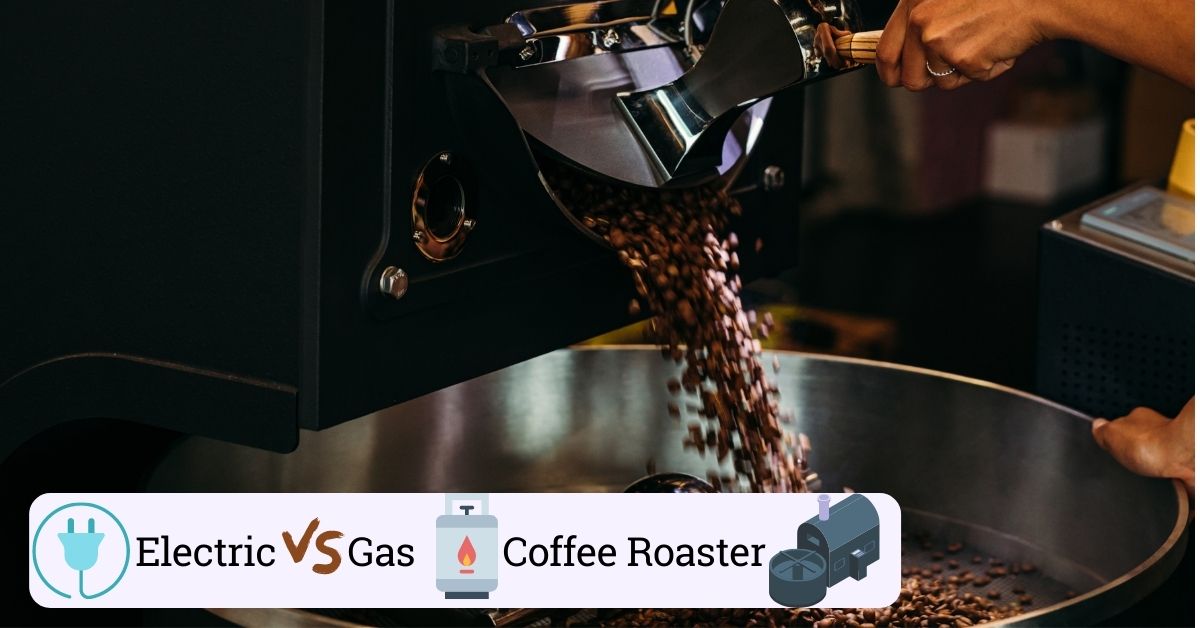 Roasting coffee is its own art form, right up there with brewing your own craft beer. Some people just bang it in there and let the machine do its thing. Others have a method. But when it comes to debating electric vs. gas coffee roasters, it’s like watching craft beer enthusiasts argue the merits of the 5-gallon glass jug. Thus, we’re looking into the differences.

Coffee roasters are moving towards electricity as they have less to no emissions, requiring fewer to no permits. In some areas, electric coffee roasters are cheaper to run. Lovers of electric say they provide better control. Lovers of gas love the precision, as they can change temperatures faster.

The most significant difference between using a gas or electric roaster is location, location, and location. Electricity is becoming green in many parts of the world, and gas is getting slapped with permits and expenses. But in some countries, gas remains cheaper. Also, if you are located in a country like South Africa with rolling blackouts, you’d be insane to go electric.

In the beginning, the debate over electric vs. gas coffee roasters was easy: gas won. Electric roasters were rubbish and more expensive to run on a commercial scale. But time has moved forward, and technology has evolved, especially when it comes to electric roasters. Laws and how we make electricity have evolved too. Thus, the debate is more nuanced than ever.

Which Is More Consistent: Electric Vs. Gas Coffee Roasters?

Electric coffee roasters are very consistent. You program the settings, and the software will do the rest. This is a big advantage to a large-scale operation that relies on inexperienced labor, especially if they are young.

If you are a home roaster, the consistency of electric can be a boon or a bummer. It depends on how much you want coffee roasting to be a hobby or just an easy at-home method to roast your own beans.

The electric heating element takes longer to heat up, and the machine must also account for the longer cooling time. But that’s what the programming is for, to make these calculations for you. Of course, there is a learning curve to finding the exact settings for the type of roast you desire. But once you’ve nailed it, the program will remember that formula.

Gas provides precision control. Like a gas stove, it can heat up instantly, and you can change the temperatures just as quickly. A genuine old-school coffee roaster is a genius at this and will have a special knack that nobody can mimic. This is both the gas coffee roaster’s crowning glory and its downfall.

Yes, gas can provide extraordinary exactness and artistry. But also, if the master isn’t around to perform their genius, the people trying to replicate the formula are not going to match it. Thus, gas is wonderful for people who will be hands-on all the time. It is a poor choice for those that want to buy a machine and use university students to do the daily work.

Which Is Higher Maintenance: Electric Vs. Gas Coffee Roasters?

Gas coffee roasters have longevity on their side, especially when it comes to the heating element.

But before you rush out and buy gas, keep in mind, they are the motorcycle equivalent of “kitchen” appliances. They need constant attention and upkeep to produce that longevity. To some people, this is their idea of Christmas, others their nightmare.

Electric roasters will need their heating element to replace every 5-6 years. But overall, they require less tinkering. Thus, if you don’t know the difference between a wrench and a set of pliers, electric is a better option.

Which Is Greener: Electricity Vs. Gas Coffee Roasters?

In the United Kingdom, there is a huge push to get people off-gas. The European Union is also headed in the direction of abandoning natural gas and looking for greener and cleaner fuel sources. Thus, getting an electric coffee roaster is the more forward-thinking and greener choice in these parts of the world.

However, in areas where electricity is unreliable, such as South Africa, gas is the only sensible option. Trying to roast coffee off a generator is horrible for the environment and exorbitantly expensive. Stopping operations when the electricity is out is not only costly but a waste if there is a power cut partway through roasting a batch.

Which Is Cheaper: Electricity Vs. Gas Coffee Roasters?

The costs of running an electric or gas coffee roaster come down to where you live. This isn’t just about your local fuel prices and which country or even US state, but your local area.

Gas coffee roasters on a large scale often come with permit requirements. These can be incredibly expensive. Thus, sometimes which town you live in can determine which is cheaper to operate. However, for home use, this isn’t an issue.

In some areas of the world, natural gas or butane is far less expensive than electricity. In other areas, electricity is cheaper.

Gas often requires extra vents and an afterburner to operate on a larger scale. Sometimes the costs of these extras make electric cheaper.

However, sometimes an electric coffee roaster can’t just be hooked up to a regular outlet. The setup or converters needed can also be expensive. This isn’t only a matter of location but dependent on the roaster’s model. Even home models might run on different voltages, so research before buying.

Electric and gas coffee roasters both have dedicated fans. But these days, they both produce quality coffee beans, provided you buy a quality model. The real reasons to buy one over the other depend on where you live. Your location will determine which is more costly to run and which one is better for the environment.