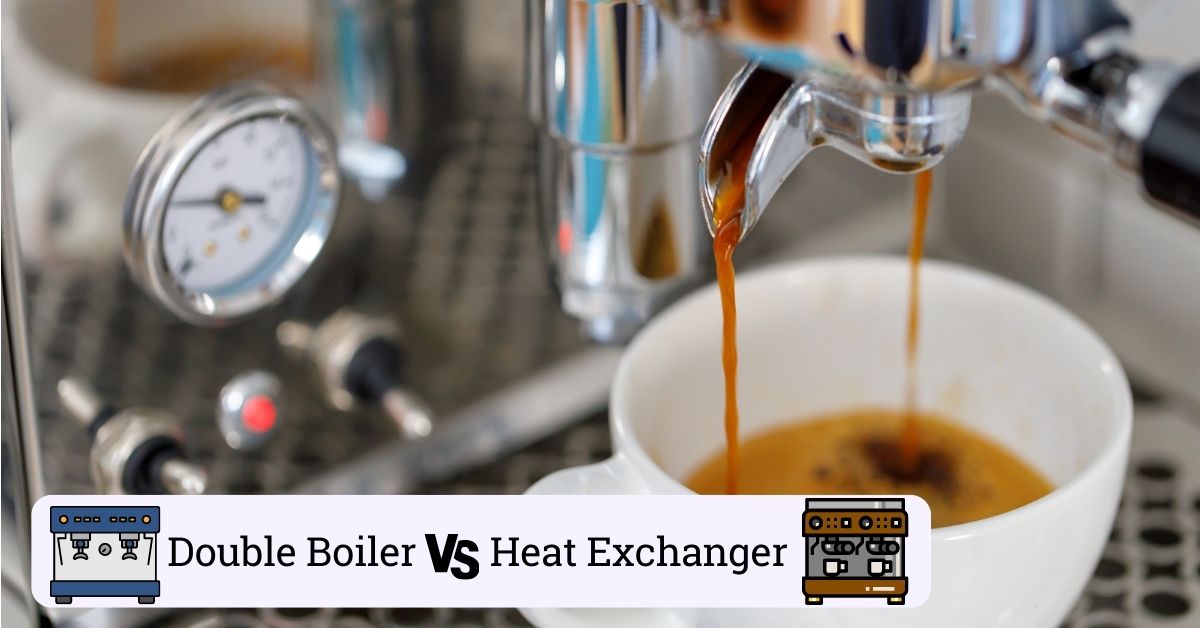 Ten years ago, if you were offered a DB or an HX machine, the choice would be instant, and you would stagger home, happily carrying your new double boiler machine, with no doubt in your mind that you had made the correct decision. You would have been right, as there was no good reason to purchase a heat exchange unit unless the price was a problem with the DB (as it sometimes was).

These days, there have been huge strides forward in all aspects of espresso machines, with more and more companies producing better and better units. As a result, it’s vital to carefully evaluate two things, primarily when purchasing a new machine.

We are often swayed by a dynamic YouTube presentation where the knowledgeable vlogger waxes lyrical on the virtues of one or another machine. We may forget that this person makes a living selling espresso machines and could omit certain machine characteristics. Next thing, we’ve bought a machine that is impractical for our purposes.

Decide what you really need or want (often two different answers!) from a machine, and you might find that several – often expensive – features on a machine are unnecessary and that you can get precisely what you want from a machine that costs far less than one that might appear to be the obvious choice.

Heat Exchangers and Double Boilers offer characteristics that result in fantastic machines, but the challenge lies in figuring out which is best for your needs. It equates to a trade-off between precision and power and which of these you prioritize.

Precision in an espresso machine relates primarily to temperature control. The ability to pull shot after shot at the correct temperature provides the most critical facet of all – consistency. If your machine can pull consistently incredible shots, you have reached Nirvana.

When discussing power, we refer to the capacity of the machine’s boiler/s and the power of the heating element, since without a steady supply of hot water and steam, our unit is doomed. More power gives us faster milk steaming, and more shots poured successively.

With its ability to control the temperatures of both the steam boiler and the water boiler, a Dual Boiler can pull shots repeatedly at a reasonably consistent temperature, which is vital for producing good coffee. This is precision.

Add a PID to this system, and your temperature fluctuation might be as little as 0.5-1%, compared to 7-12% fluctuation without the PID. (Proportional-Integral-Derivative controllers use an algorithm to keep your machine’s water at the required brew temperature as set by you.)

Recent improvements in HX machines have seen the addition of a PID to many units, narrowing the gap between Double Boilers and Heat Exchange machines somewhat.

Traditionally, HX machines can churn out many cups of milk-based drinks in a row, more so when tied in with an enormous boiler, as we see on several machines. Since the boiler is used purely for steam, it offers an incredible delivery to the steam wand. This is power.

Although a DB does have sufficient power to produce a good quality milk froth, they usually have a relatively compact steam boiler and struggle to produce jug after jug of the same micro-bubbled milk froth. Instead, they focus on temperature variations through the group head, whereby single-origin tastings can be properly enjoyed.

Standard on a DB and even more so with the addition of a PID is the ability to ramp up temps for lighter roast coffee and drop them again for darker roasts, etc. We all know there is a definite difference between roasts, but less known among beginners is that choosing the correct temperature for each roast is essential.

With And Without PID

With a PID added to a Heat Exchange machine, precision is added to power, and the machine takes on another dimension. Improved temperature control joins an existing ability to serve a small crowd with milk-based coffee, and suddenly the HX machine is at a different level.

Without the PID, an HX machine can produce absurd amounts of power for steam, but since it does not have a dedicated brew boiler, the temperature will fluctuate by several degrees – not just over time but with each shot.

Sure, a cooling flush will return it to the correct temperature for the next brew, but it’s impossible to target a specific temperature. Each shot will vary slightly from the last.

If the HX has a PID, temperatures through the steam wand are more consistent and can be increased or decreased as required. (Cortados and cappuccinos might require slightly lower temps to retain control in the pitcher, whereas large lattes can be created more quickly by increasing the temperature.)

Gone are the days when a Double Boiler is the automatic choice, cost aside. Considerable advances in technology and materials mean that buyers can decide what they want from a machine and get it, often at an appropriate price.

I suggest going with an HX machine if milk-based drinks are prominent in your future and if experimenting with different roasts at different temperatures doesn’t interest you. A DB is the best choice for those looking to experiment with single-origin coffees, where adjusted temps through the group head are required.