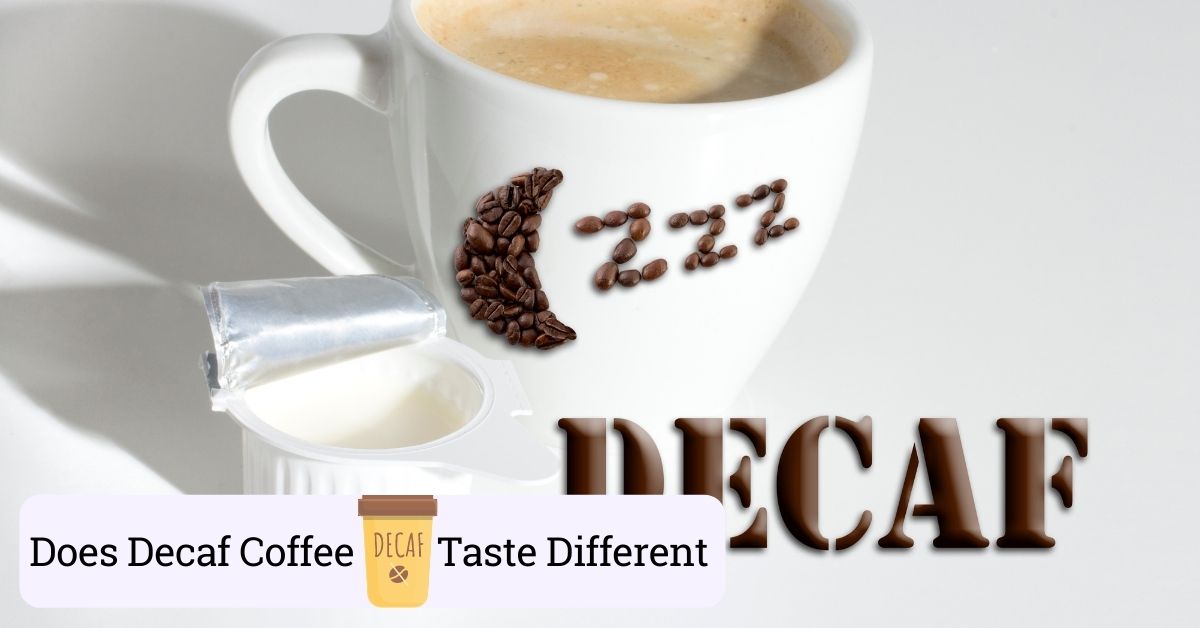 Purists often dismiss decaf coffee as “not real” and should not be consumed by any self-respecting coffee aficionado. The facts are somewhat different from these emotionally-laden statements.

There are two schools of thought as to whether caffeine contributes to the taste of coffee and whether its removal negatively affects the decaf coffee bean. Of the three methods of decaffeinating coffee, the one using carbon dioxide has the most negligible effect on the final taste of the coffee beans.

Several factors need to be considered before passing an opinion on the taste differences that decaffeinating coffee allegedly causes. There is no discernible taste difference for the typical person imbibing a decaf brew. While aficionados claim a taste difference, they generally can’t tell the difference when submitting to a blind taste test.

Contrary to popular belief, decaffeinated coffee is not caffeine-free, and while the caffeine content is significantly reduced, most decaf coffees still contain about 3% of regular coffee’s caffeine content.

Decaf coffee intends that the taste remain the same as regular coffee but without most caffeine. Many people believe that decaf coffee tastes different from the equivalent caffeinated beans.

Some claim the tastes to be less pronounced, while others claim Decaf coffee has a chalky taste.

Most impressions are borne of ignorance, and the reality is that in blind taste tests, professional coffee experts cannot identify the cup containing decaf coffee.

How Is Decaf Coffee Prepared?

You can remove caffeine from coffee in a number of ways.

All plants “breathe” in carbon dioxide and produce oxygen. Therefore, using carbon dioxide to remove caffeine from coffee is not as unusual as it may first sound.

When carbon dioxide is compressed, it becomes part gas and part liquid and combines selectively with caffeine.

The most used method involves steaming the beans in the compressed supercritical carbon dioxide. The supercritical CO2 penetrates the beans and pulls the caffeine out through charcoal filters.

It results in only the caffeine being removed, and all the components that make up the bean’s flavor are not affected.

This process involves the use of no solvents at all. It is carried out by soaking the green coffee beans in hot heated water below boiling point until they are saturated. This step removes all the various chemical constituents.

The caffeine is removed from the water by filtering it through activated charcoal.

Once the caffeine is removed, the beans are returned to the water, where the previously extracted chemical flavor constituents are reabsorbed.

Experts agree that this has the most negligible impact on the taste of all the methods to remove caffeine from coffee.

The Solvent Method To Decaffeinated Coffee

It is the oldest commercially viable method to remove caffeine from coffee.

Previously companies used benzene and trichloroethylene to strip the caffeine out of the beans.

However, research proved these carcinogenic, and manufacturers quickly stopped using these substances.

1. Methylene chloride – The benefit of Methylene chloride is that it evaporates at 104° F, and as coffee beans are roasted at 400° F for at least 15 minutes, then brewed at 200° F, there is no chance that any of the solvents will remain in the, now decaffeinated, beans.

2. Ethyl acetate – Ethyl acetate is the newest form of solvent. It is derived from fruit, a touted natural substance used to remove caffeine.

It involves the following steps.

How Does Decaffeinating Coffee Impact Its Taste

It is challenging to compare decaf coffee with regular caffeinated coffee accurately.

The pure caffeine crystals are white and odorless. There are opinions as to whether caffeine has a taste effect on coffee or not.

The Journal of Caffeine Research produced a paper in 2017 wherein they concluded that caffeine is a prototypical bitter taste and, in its purest form, is rejected by most people.

All this creates a question of why caffeine is so widely consumed, not only in coffee but all in carbonated soft drinks.

The general opinion is that, on its own, it tastes bitter, alkaline, and slightly soapy. Not the taste characteristics associated with the most popular drinks from around the world!

The lack of caffeine may not result in any taste difference. Any taste change may result from a process that removes some of the oils and other flavor components during the decaffeination process.

The general view is that, although the taste differences are minor, the different processes affect the decaffeinated coffee in the following ways.

This process creates a flavor with more body and less acidity. It occasionally alters or makes the flavor less distinct.

The Solvent Method Of Decaffeinating Coffee

The solvent method of decaffeination does not reduce the acidity but may negatively affect the body of flavor.

The carbon dioxide method is the purest form of decaffeinating coffee as it uses no additives or chemicals.

It leaves the taste of the decaffeinated coffee much closer to the original, and generally, it’s from this process that tasters cannot tell the difference.

For the average coffee drinker, there is no discernible difference between the taste of caffeinated coffee and decaffeinated. There may be subtle differences in the different decaffeination processes. Some of these may be why decaf coffee gets such a bad rap amongst aficionados.