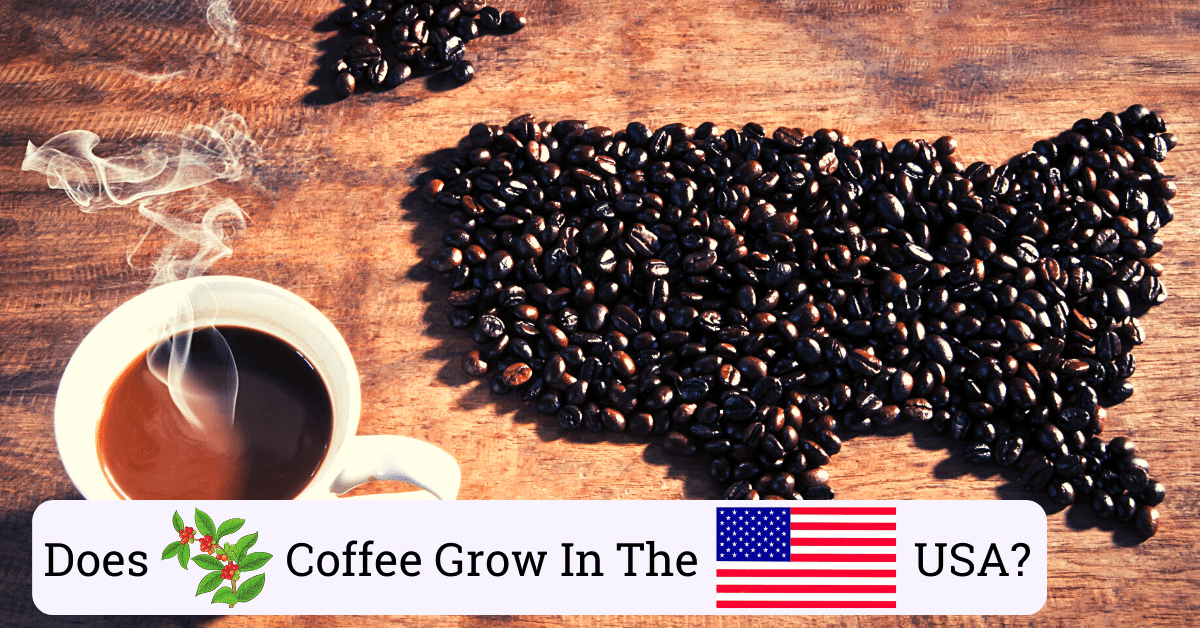 When shopping for coffee beans or ground coffee, I am always amazed and overwhelmed at the array of beautifully packaged and the large variety of coffees displayed on the shelves from all over the world.  During one of these shopping outings, a fellow shopper asked me, “Does coffee grow in the US”?

In the United States, the largest producer of coffee is grown in the state of Hawaii, where it was first introduced about 200 years ago.  A small amount of coffee has recently been produced in California, and coffee also grows in Puerto Rico, a territory of the US.

What Do We Know About The History Of Coffee In Hawaii?

Coffee plants were first introduced in 1817 to Hawaii but with very little success.  It was only in 1892 when a sugar cane grower introduced a plant variety from Guatemala, which proved to be a more viable choice for the climate on the island.  This coffee was aptly named “Guatemalan,” but many years later was changed to “Kona Typica.”

During these first years of growing coffee in Hawaii, the farmers faced several problems and price increases in the two World Wars and the Great Depression.

In 1990 with the closing of the no longer good pineapple and sugar plantations, coffee farming in Hawaii slowly blossomed and became popular throughout the state. The one region that remained in production during these early years was the Kona region, and it is still successfully growing coffee today.

Since then, more than 10 000 acres of coffee have been growing in 11 major regions on five different islands and many smaller farms.

Where Is Coffee Grown In Hawaii?

Most of the coffee grown in Hawaii comes from the larger or “Big Island” but is also grown on the smaller islands.

Coffee Is Grown In The Following Regions Of Hawaii

There are more than 630 farms in this region, and the Kona coffee produced here is internationally known and is one of the most expensive coffees in the world.  Generations of farmers continue to work on the lush and fertile land where the coffee plant can live for more than 100 years.

The taste of Kona coffee is characterized as being a rich medium body that is sweet and fruity with hints of spice and nuts.

This region is the oldest and fourth-largest main island situated to the North and has picturesque green valleys, sharp mountain peaks, and jagged cliffs.

Over time, the rustic volcanic foundation turned the porous and rich nutrient soil to a red color with large iron-oxide deposits.  The abundance of rain together with the rich soil makes for ideal conditions for growing coffee.

There are three coffee plantations in this region, of which one is the largest in the US and produces half of the coffee production in Hawaii.

Kauai coffee has a variety of roasts with tastes ranging from the strong, buttery, and mild acidity to the floral brews with notes of rose, jasmine, and hints of clove and anise.

Maui is the second-largest island, and coffee is grown on over 500 acres of land on mostly small farms.

Many of the farmers pick the ripe cherries by hand, and the creative processing techniques that are used add many different aspects to the taste of the coffee.

The characteristics of the coffee beans range from hints of cinnamon, allspice, licorice, and a sweet fruity taste.  Maui Mocca is this island’s most cherished flavor.

Coffee grows on the upper slopes of the central part of this island in the rich, vivid red soil.  The 150-acre coffee plantation is the only producer of Molokai coffee.

Other districts where coffee is grown are Ka’u in the far south, Puna in the southeast, and Hamakua in the northeast.

How Much Coffee Is Grown In Hawaii?

Although coffee grown in Hawaii amounts to less than 1% of the coffee grown globally, it is still a significant economic industry in the US and is the second-largest crop produced in this state.

Many of these farms share their crops with local cafes, retail outlets, and restaurants so that the Hawaiin people can enjoy coffee grown in their state.  Coffee farmers allow tourists and visitors to the island to visit their farms and learn more about the coffee industry in Hawaii.

Experimenting with growing coffee in San Diego began in 2002 with beans bought from Panama and Costa Rica.  Perseverance over the next 12 years resulted in a crop of trees bearing fruit, and this was the beginning of a journey to produce coffee in this state.

In 2017 the Frinj Coffee Company was established by these early growers of coffee, and they sold off coffee shrubs to avocado ranches to plant alongside their avocado trees.  Additional land, water, or fertilizer is not required when using this intercropping method.

The avocado trees offer the coffee plants shade and shelter, and this, together with the warm weather and frost-free zones experienced throughout the year, proved an ideal setting for growing coffee.

Although coffee growing is relatively new to California, it has become a growing industry with good prospects for the future.

Over the years, coffee has been a major domestic and export industry for this Caribbean Island but not without its share of difficulties.  In 2017 the industry was devastated when Hurricane Maria destroyed approximately 80% of the coffee crops.

The industry is slowly being revived, and with this ongoing process, coffee is again growing in this region.

We can be certain that coffee is produced in the rich mineral soils on the slopes of the US state of Hawaii.  Different varieties of coffee are produced here annually, and the most renowned being the Kona coffee bean, with its distinct flavor is much desired throughout the globe.

Although coffee growing in California is still in its infancy, prospects look good, and locals could soon be sitting down to enjoy a cup of coffee brewed in their state!

Hurricanes destroyed a significant amount of coffee plantations in the US territory of Puerto Rico, which was a major setback to this once-lucrative coffee industry.  The slow process of reviving this industry continues as the growing of coffee returns to this Caribbean Island.