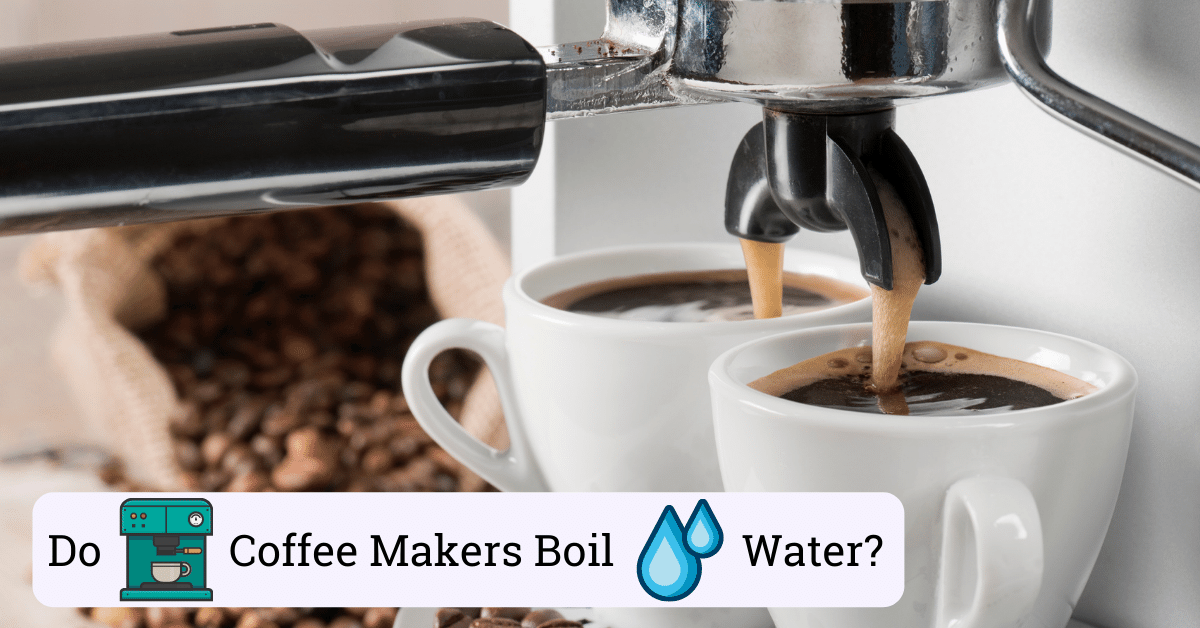 If you woke up feeling a little philosophical this morning, the smell of your morning coffee brewing might prompt you to consider the inner workings of your coffee maker; in particular, if it boils or simply heats the water?

The method most coffee makers use to heat water is similar to how a standard kettle works. Elements within the appliance’s heating chamber heat the water to either boiling or near-boiling. Depending on the type of machine, the hot water drips over coffee or is forced through it.

However, not all coffee makers use the same technique to heat water; some need additional appliances such as a stove, and others require you to boil the water for them.

Different Coffee Makers And How They Heat Water

There are several shapes, sizes, and types of coffee makers available, and we can’t assume each one functions in the same way. However, we are sure that coffee grounds need hot water to become coffee – well, except for cold brew coffee, of course. So, let’s find out how the most popular coffee makers heat water.

In the case of the drip coffee maker and percolators, the water does boil at some point during the process, but this doesn’t mean that rapidly boiling water is dispensed directly onto the coffee grounds.

Espresso and single-serve pod coffee machines have water pumps (and not a boiling-water pump) that transfer the water through the heating element and then through the coffee that eventually ends up in your cup.

Other Coffee Gadgets That Boil Water

The coffee machines we discussed above work with electricity; they also operate automatically – generally with the press of a button. But not all coffee lovers are fans of high-tech brewers; they prefer to be a part of the process.

One of the coffee makers that requires a stove is the Moka pot. It does look a little intimidating at first, but you’ll get the hang of it pretty quickly. This coffee maker has two main components that; the bottom half is the water reservoir, and the top half is where the coffee collects.

To make coffee in a Moka pot, you fill the bottom half with water, scoop coffee into the little funnel-like compartment, twist on the top half, and place it on the burner. The heat from the burner will boil the water; this creates pressure that pushes the water up the funnel, through the coffee, and eventually, it boils over through the outflow spout and into the top half.

The Turkish coffee maker – traditionally known as a cezve – boils the coffee twice before serving. Unlike most coffee makers, the cezve will only work as intended with extremely fine coffee – finer than an espresso grind.

To make coffee in a cezve, first, you’ll boil water (with sugar to taste), remove it from the heat, then add a teaspoon of fine coffee and return it to the heat to simmer. After the first boil, you scoop the foam off and stir it. Then back to the burner for the second boil before serving.

Coffee Makers That Use Boiled Water

There are also coffee makers that don’t make direct use of electricity or the stove, but they do, however, still need hot water to produce coffee.

Should Water Be Boiling Hot To Make The Best Cup Of Coffee?

The question appears to have a straightforward answer, but it becomes a little complicated when you really dig into it.

The National Coffee Association USA (NCA) states that water temperatures between 195 °F and 205 °F are optimal for the best extraction and, therefore, the best-tasting coffee.

However, an article published in Scientific Reports suggests that precise flow rate control might be more critical to the overall taste quality than industry guidelines on the perfect temperature.

Interestingly, water typically reaches its boiling point between 202 °F and 212 °F (depending on altitude). The NCA says that too hot water (presumably more than 205° F) can reduce taste quality, just as too cold water (presumably below 195 ° F) will make coffee taste flat because the low temperature negatively impacts extraction.

If we abide by the guidelines of the NCA – and discard the study – could this mean that the coffee makers that boil water might be delivering subpar coffee? Some suggest that coffee machines only reach temperatures between 195 °F and 205 °F. However, we couldn’t verify these specifications through any reputable source.

Ultimately, it would depend on what type of coffee maker you use; some coffee makers boil the water, and others appear only to reach a temperature close to boiling point. Keep in mind that product quality can also affect the maximum heating temperature the machine can achieve.