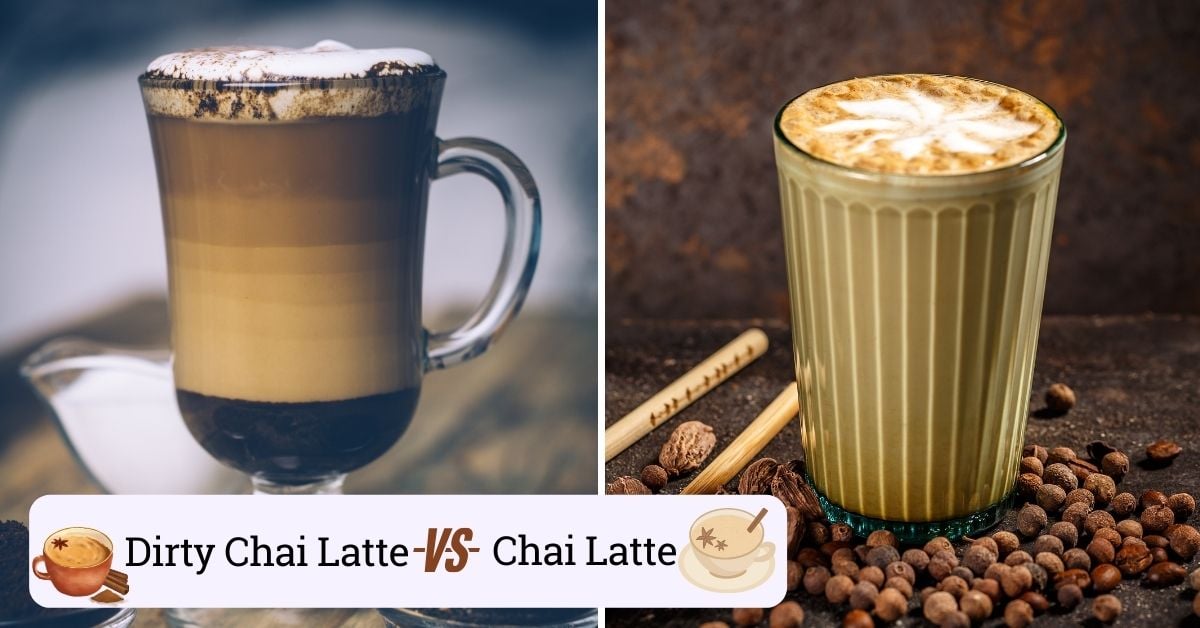 The difference between the dirty chai latte and the chai latte is that the dirty version has one to two espresso shots added to it. Both types of lattes include the same spice mixture from traditional masala tea. You add steamed milk to both kinds of lattes.

Both these options are great if you feel like trying something new in your favorite coffee shop. However, it’s also good to know the traditional way of making chai (or masala tea) and that you can even make it in the comfort of your own home.

A chai latte can also be seen as a non-traditional drink as it is based on Indian masala tea. A chai latte is made with a combination of spices that are used in masala tea (cinnamon, ginger, black pepper, cardamom, and cloves) with steamed milk. Both lattes contain the same spice blend with the black tea.

The flavor profile of both lattes is different. There is unsurprisingly a more robust coffee flavor with the dirty version, masking the tea flavor slightly. With the chai latte, there is a dominant taste of black tea and its complementing spices.

A similarity between these two lattes is that both contain caffeine. A regular chai latte has about 50 to 70 mg of caffeine, compared to 160 mg in a dirty chai latte. The caffeine is due to the black tea, but the dirty version has a much higher caffeine content thanks to the added espresso.

If you’re perhaps interested in the calorie content in these two lattes, there is no significant difference. The addition of espresso changes little to nothing. The chai latte and the dirty chai latte are around 190 to 200 calories per serving.

If you are perhaps struggling to find the exact name “dirty chai latte, “look for its alternative names like espresso chai, chai charger, and java chai. For coffee lovers and those that enjoy exciting flavors and spices, this is really the perfect drink to try.

The Origins Of Chai

Masala tea (otherwise known as chai) originally came from India and nowadays refers to a milky black tea infused with specific spices. Chai means tea in Hindi, so another way to say it is masala chai.

If you go back even further into history, masala tea was initially made without tea. It was only the spices infused in hot water in Ayurvedic practice. Black tea was added during the British colonization era when tea farming began in India.

The chai latte took the masala tea mixture and combined it with frothy steamed milk, as in other traditional coffee lattes. In this sense, the chai latte is a mixture of east and west.

The dirty chai latte went one step further by adding coffee. This event happened by chance around the 1990s when a man ordered a chai latte, and the barista accidentally added an espresso shot to the drink.

The first step to making a chai latte is making masala tea. The masala tea is made by simmering the spices and loose black tea in hot water. Herbs and spices include whole cinnamon, fresh ginger, cardamom, black pepper, and cloves. Nutmeg and fennel seeds are optional.

The steamed milk part is up next, where the recommended milk is either 2% or whole milk. Heat the milk until it’s scalding and then froth it using a French press, hand frother, or whisk.

Drain the tea to eliminate the whole spices and tea leaves, and add your frothed milk. To make a dirty chai latte is simple. Make one or two espresso shots and add this to the mixture before adding the milk.

Don’t worry if you don’t have all the whole spices at hand. Luckily there are great pre-mixed dried spices together with the black tea available in teabags (chai blends). These bags can be infused in hot water, as is done with ordinary tea.

Like most hot tea and coffee drinks, the popular variation is to make it cold or iced. Iced chai lattes or dirty chai lattes are typical and involve pouring the mixture over iced cubes or blending it with ice.

You can swap out the milk for other options, like soy, almond, or oat milk, to make this recipe vegan. Most vegan milk substitutes can also froth a decent amount. If you need some sweetness in your latte, you can add sugar or syrups. People use syrups to mainly add different flavor profiles, such as vanilla.

Some people even exchange black tea for green tea to make a green dirty chai. Although this is far from traditional, enjoying your drink depends on personal preference and your unique dietary needs.

Both a dirty chai latte and a chai latte are made from masala tea with steamed milk. However, the dirty version has the addition of espresso to make it a coffee drink.

Both drinks are warm and comforting, especially from the aroma and flavor of the rich spices. Traditionally, people used chai to promote wellbeing in Ayurvedic practice, and these days it is enjoyed as a delicious drink.