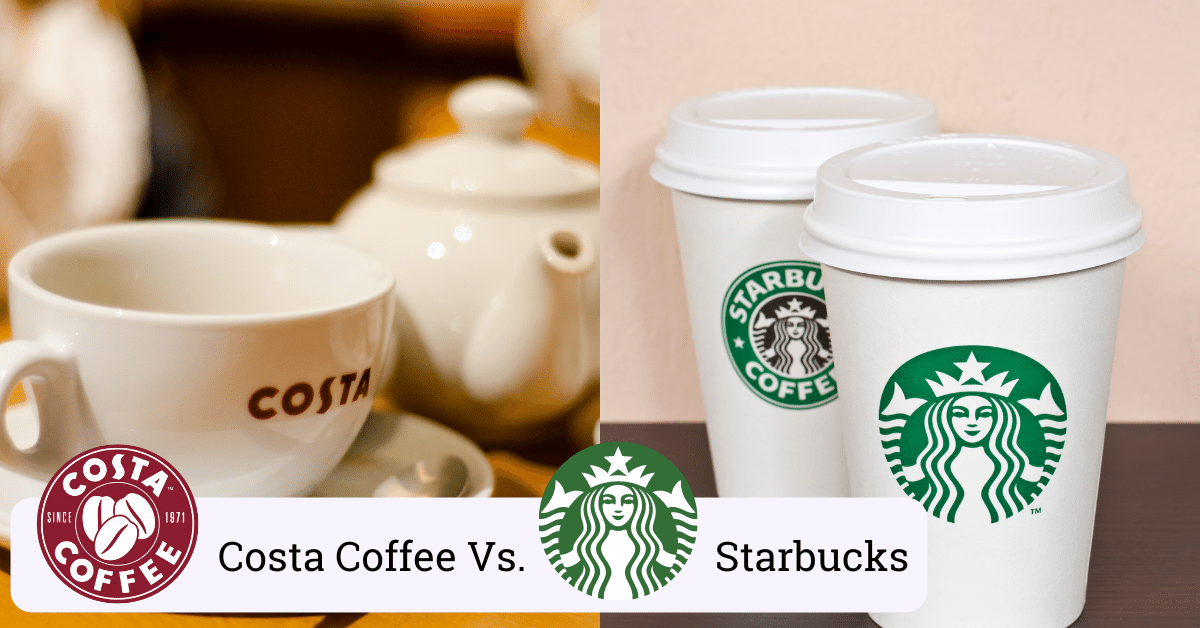 Costa Coffee and Starbucks are the two biggest coffee chains globally, and both have a delicious menu of coffees and many chains across the globe. There must be a reason that these two coffee shops are so popular. So, is Starbucks better than Costa Coffee, or the other way around?

Starbucks, the first largest coffee chain globally, is superior to Costa Coffee, the second-largest coffee in the world.  Starbucks, home to the delicious Frappuccino, has a more extensive coffee menu, a variety of coffee types available, and more shops worldwide.

Costa Coffee Or Starbucks, Which Chain Is Better?

Costa Coffee is the second-largest coffee chain globally, while Starbucks is the largest coffee chain in the world. Costa Coffee’s claim to fame is their delicious Mocha Italia blend, while Starbucks ‘ claim to fame is their signature Frappuccino. While both have an extensive menu of coffees with many varieties enjoyed by millions worldwide, one has to come out on top.

A Brief History Of Costa Coffee

In 1981, Sergio and Bruno finally opened their first proper Costa Coffee shop in London on Vauxhall Bridge Road. The Costa Coffee shop soon became so popular that it began opening up all over London and soon worldwide.

A Brief History Of Starbucks

When writing this article, Starbucks, like Costa Coffee, has been running now for fifty years. In 1971, Starbucks opened their first shop in Seattle on Pike Place Market by Gordon Bowker, Jerry Baldwin, and Zev Siegl, who met as students at the University of San Francisco. The shop offered a variety of coffees and teas from around the world. A significant change soon came that turned this small coffee shop into a coffee chain.

Today Starbucks is the single biggest coffee chain in the world.

What Is Costa Cofee’s Coffee’s Main Coffees and Varieties?

Costa Coffee’s popularity boils down to the taste of the coffees and the varieties they offer. There six main coffees are Lattes, Americanos, Flat Whites, Cappuccinos, Espressos, and Cortados. Costa Coffee also serves different teas and cold drinks like Iced Coffees.

My favorite drink and personal highlight from their menu is the drink called Caramel Cortado. This coffee drink contains Costa Coffee’s own blend of Espresso, velvety milk, and, most importantly, rich caramel, and this drink also has caramel crumbs on top.

All their drinks are of a high standard, but unfortunately, they do not offer as much variety as Starbucks.

What Is Starbucks Coffee’s Main Coffees and Varieties?

Starbucks’ unanimous fame also boils down to their rich taste of coffees but offer so much more variety than Costa Coffees. They, too, provide the same six central coffees as mentioned above but offer much more experimental flavors of coffee.

Starbucks ‘ menu of coffees includes their signature Frappuccinos, Pumpkin Spice Lattes, and themed drinks like the Butterbeer Frappuccino, which is a Frappuccino drink inspired by the famous Harry Potter franchise.

Costa Coffee’s Availability Around The World

Costa Coffee’s largest country of establishment is the United Kingdom, where it has about 2,467 outlets of Costa Coffee.

Unfortunately, there are no Costa Coffee outlets in the United States.

Starbucks Availability Around The World

Starbucks is available across the globe, and it is the biggest coffee chain in the world.

Starbucks spans 79 countries, and its most prominent country of establishment is the United States, where 15,041 Starbucks coffee shops are open.

Costa Coffee VS. Starbucks, Which One Comes Out On Top?

Starbucks comes out as the best coffee chain between the two coffee chains. Its variety of coffees, especially in its number of Frappuccino’s and their taste far outweighs and is better than that of Costa Coffee.

What Sizes Of Drinks Do Costa Coffee Offer?

All their drinks, including these principal coffees, are served in either a small Primo size, a medium Medio size, or a large Massimo size.

Where Sizes Of Drinks Do Starbucks Offer?

Although both Starbucks and Costa Coffee are two of the largest and best coffee chains globally, Starbucks comes out on top.