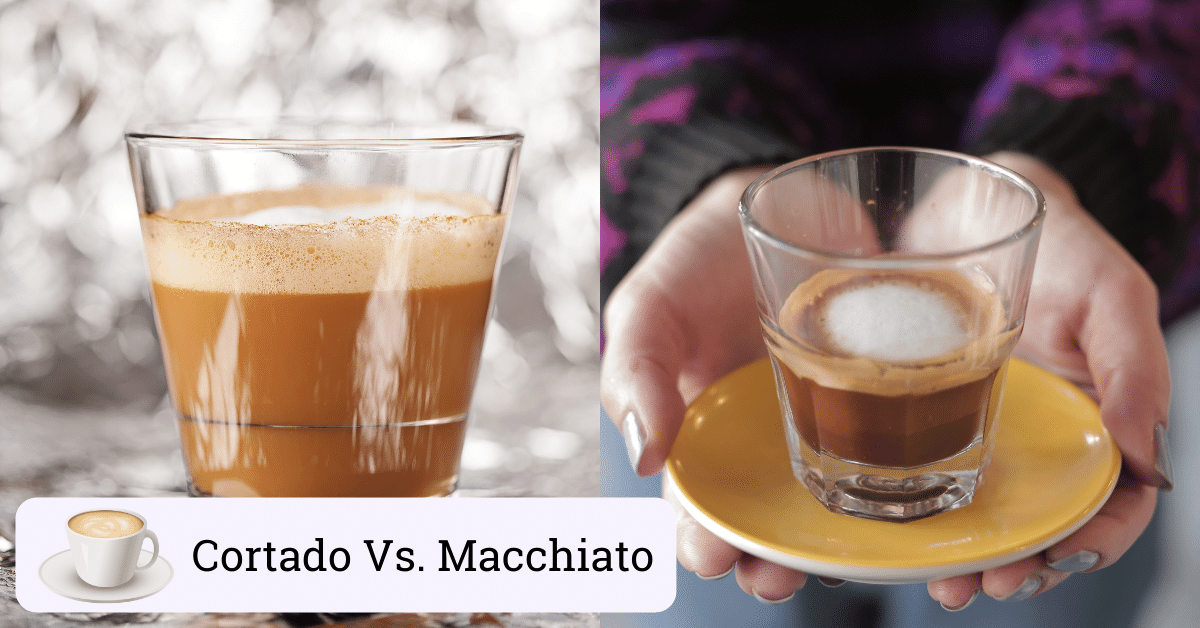 The Cortado and the Macchiato are both favorite drinks among baristas, but there is much confusion about how these drinks are prepared and what the correct recipe for these drinks should be. Let’s take the time to clear up some of the confusion.

The Cortado is a very strong espresso-based drink that is a favorite among baristas and those who prefer the strongest coffee drinks.

This drink is typically made with a double-shot of espresso; usually, a dark roasted coffee combined with an equal amount of warm and textured milk.

The Cortado is usually served in a 4 ounce or 4 ½ ounce cup with no handles and is intended to be a very strong and quick drinking cup of coffee.

The word Cortado means “to cut” in Spanish, which illudes to the type of drink that the Cortado is. The intention behind the drink is to cut the strong double espresso with sweet, textured milk to lighten the strength and flavor of the espresso.

To prepare a Cortado, pull a double shot of strong espresso directly into a small 4oz cup. This should generate 2 ounces of espresso for the drink.

While the espresso pulls, prepare roughly 2oz of milk. Steam the milk until it is textured but not foamed. There should be Latté or no foam in milk used for a Cortado, even less than in milk for a Latté.

Once the espresso is in the cup and the milk is prepared, add the milk to the espresso to complete the Cortado. The drink should not be too hot, as it is served in a cup with no handles. It must be cool enough to hold and drink immediately after pouring.

The drinking experience of the Cortado is unique. This is a very strong coffee, with a very forward flavor of espresso. The espresso is strong and bitter, and the small amount of milk allows the true natural flavors of the coffee beans to shine.

Simultaneously, the sweet textured milk cuts through a lot of the butter undertones of the espresso flavors and significantly lightens and lifts the drinking experience.

This coffee is for those who enjoy strong, full-flavored coffee drinks that are very espresso-forward.

The Macchiato is another top favorite of baristas and coffee enthusiasts. The word Macchiato means “to mark’. This has often led to some confusion around the drinking, with the assumption that the milk used in the drink should be marked with espresso.

In fact, the traditional Macchiato is made the other way around. The milk is meant to mark the espresso. This means that only a very small amount of milk is used to prepare the Macchiato.

This drink is usually served in a very small cup, one that is usually meant for a double espresso. The milk in the Macchiato is typically textured but not steamed and kept at a low enough temperature to drink immediately after pouring.

Macchiato milk is very smooth and silky but not foam. This creates the “mark” when poured into the espresso.

The Macchiato preparation is identical to that of the Cortado. The only real difference is that the Macchiato uses a single shot of espresso and an appropriate amount of textured milk for the single-shot rather than the double shot in the Cortado.

To prepare the Macchiato, pull a single shot of high-quality espresso into a small cup. Texture and warm about 1oz of milk to add to the single-shot 1oz of espresso/

Once the milk is warmed and smooth in texture, pour the milk into the Macchiato directly into the center of the espresso. This creates the mark on the drink that provides the Macchiato its name.

The drinking experience of a Macchiato is that of a very well-balanced, strong yet even tasting coffee drink.

The single shot of espresso combined with an equal amount of sweet ad textured milk provides a very balanced flavor profile. The espresso is not overpowering, and the milk is highlighted in this drink and allowed to mingle evenly with the strong flavor of the espresso.

This drink is easy to drink in a short time, and the warm milk that is used is very smooth and round on the tongue.

This drink is much lighter than the Cortado and much easier to drink. This drink is enjoyed by many, and each barista has their own take on this traditional drink.

The Cortado and the Macchiato are both favorite drinks of many coffee connoisseurs. They are similar in many ways, but the true difference between these two espresso-based drinks is found in the drinking.

The double shot of espresso in the Cortado makes it a much harsher and very strong-tasting coffee drink. The smooth, warm milk cuts through the majority of the harsh flavors, but the string nature of the double shot is still hard to drink for many people.

The Macchiato is far easier to drink and a much smoother and much more well-balanced drink overall. The Cortado is strong, and Macchiato is smooth.

The Macchiato has only a single shot of espresso, and it is balanced with 1oz of milk, which makes for a very even flavor on the palate.

The Macchiato is for those who prefer easy drinking coffee, while the Cortado is for the coffee enthusiast who prefers the strongest coffee on the menu.