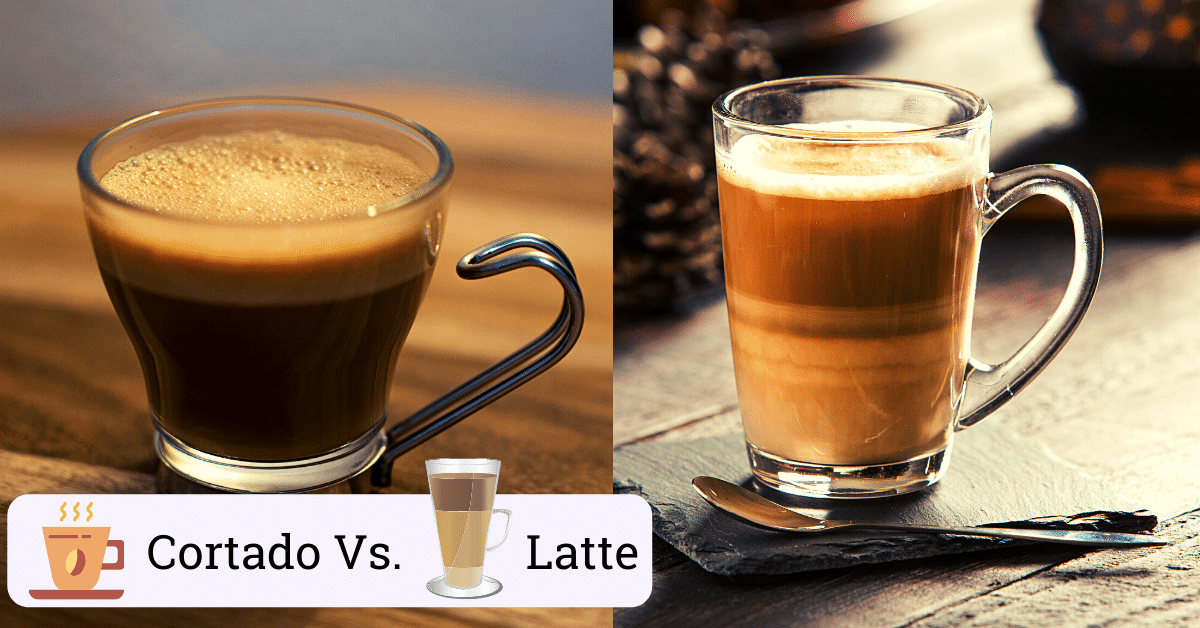 If you enjoy your espresso on the milky side, then you’re probably a fan of the cappuccino or the latte. But you might have noticed a new coffee on the menu of your local coffee shop: the cortado. Maybe the barista has recommended one to you instead of your daily latte. What is the difference between the cortado and the latte?

Fans of the Italian coffee tradition who want a bit of milk with their espresso may choose a macchiato (just a splash), a cappuccino (foamed milk), or a milky latte. But Spain and Latin America also have a coffee tradition, and that’s where the cortado comes in. It’s similar to the latte in that it’s also a combination of a doppio (double) espresso and steamed milk – but just a little different.

Cortado Vs. Latte: A Quick Comparison

What Is A Cortado? A Quick Guide

The cortado is a short, espresso-based coffee that consists of an espresso (usually a double espresso) topped with an equal amount of steamed milk. The cortado gets its name from the Spanish word cortar, meaning “to cut” – in other words, the milk “cuts” or dilutes the espresso to make a milder, smoother beverage.

Usually served in a four-ounce cup, the cortado is a quick pick-me-up, drunk like an espresso, often in the afternoon.

A History Of The Cortado

The cortado hails from the Spanish coffee tradition in the Basque areas of Spain and France, where a cortado is an espresso with steamed milk but not foam, which is typical of Italian coffee. However, the beverage we know today as the cortado was invented in the 1960s in Latin America, probably Cuba.

How To Make A Cortado

Baristas make a cortado in the following way:

Some Spanish baristas may use even less milk than coffee; some American baristas may include a thin layer of milk foam, but this is not traditional.

Variations Of The Cortado

Although the cortado is not the most commonplace coffee, there are a couple of variations.

This variation of the cortado was developed by a San Franciso coffee shop, the Blue Bottle Barista, in 2005. The Gibraltar is a cortado served in a Gibraltar glass (although it is generally expected for cortados to be served this way).

A macchiato, café macchiato, or espresso macchiato is an espresso coffee with a splash of steamed milk or milk foam added. In Italian, “macchiato” means marked, spotted, or stained – so the espresso is simply marked by the milk, not diluted. The Portuguese version, café pingado, is translated as coffee with a drop (of milk). Some interpretations of the cortado suggest that the cutting of the espresso can be with a minimal amount of milk, but the macchiato generally includes less milk than the cortado.

What Is A Latte? A Quick Guide

The café latte (Italian for “coffee with milk”) is now commonly known as a latte. The term refers to an espresso topped up with four times as much steamed milk and served in a tall glass.

Originally a breakfast beverage in Italy, the latte is now popular at any time in the United States. However, ordering a latte in Italy will only get you a glass of milk, so be sure to order a “café latte.”

Lattes range from a punchy, smooth espresso with milk to a milky coffee flavored with various sweet syrups.

Latte art has developed as baristas manipulate the microfoam and steamed milk to create designs and patterns atop your coffee.

A History Of The Latte

The latte originated in Europe as a breakfast beverage, much like the cappuccino, where drinkers would combine coffee and warm milk as desired. Still today, in Italy, a café latte is often made by combining espresso from the Moka pot with milk heated on the stove – the milk is not steamed or frothed. It would be unusual to order a latte in an Italian coffee shop, as a café latte is enjoyed at home before work or school.

As coffee culture spread to the United States, the café latte as we know it was developed by baristas and became the firm favorite it is today.

How To Make A Latte

To make a café latte at home, do the following:

Variations Of The Latte

Most variations of the latte include flavored syrups, as popularized by mainstream coffee shops.

A flavored latte is an espresso-based latte flavored with syrup, often a caramel syrup. Starbucks, in particular, has created seasonal flavored lattes, such as October’s pumpkin spice latte or the Christmassy ginger spice latte.

However, many milk-based warming beverages are also referred to as “latte,” although they have no coffee in them – this would include the chai latte, the matcha latte, or the red or rooibos latte, which are all tea-based beverages.

Starbucks has created various twists on the latte macchiato, adding vanilla or caramel syrup or even chocolate to create an entirely new beverage, not recognizable as a café macchiato at all (although voluptuous and velvety, with a caffeine hit).

Also translated as “coffee with milk,” the café au lait is a French version of the latte made with regularly brewed drip coffee instead of espresso.  The café au lait often contains less milk than the traditional latte, equal amounts of milk, and coffee. As with the Italian café latte, the café au lait is a breakfast drink, often served in wide bowl-like cups to allow croissant dipping.

The café mocha is a decadent latte variation that includes a dash of hot chocolate and replaces the microfoam with cream.

Although the cortado and the latte are both made by topping up a double espresso with steamed milk, the two beverages are different, coming from different nations’ coffee traditions. The Spanish cortado is a short coffee with equal amounts of steamed milk and espresso, while the Italian latte is a tall, milky beverage, usually drunk at breakfast. The café latte is not to be confused with other popular latte-style beverages with no coffee.